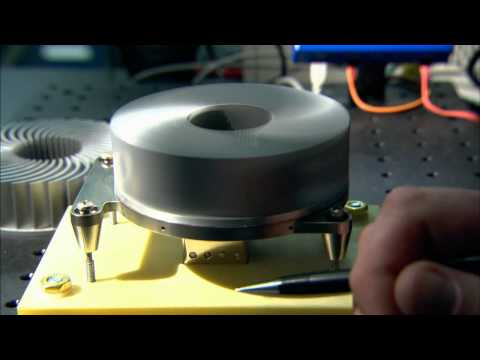 Your typical air cooling setup for a processor consists of a heatsink and fan configuration. The heatsink draws the heat away from the chip, and the fan sits on top sucking the heat away from the heatsink and out of the case. It’s a setup that has been in use for decades, but has its limitations and can be very noisy depending on just how hot your chip is running.
Sandia Research Laboratory believes it has come up with a much more efficient solution that simply combines the heatsink and fan components into a single unit. What you effectively get is a spinning heatsink.

The new design is called the Sandia Cooler. It spins at just 2,000 RPM and sits a thousandth of an inch above the processor. Sandia claim this setup is extremely efficient at drawing heat away from the chip, in the order of 30x more efficient than your typical heatsink-fan setup. This is because it removes thermal resistance by cutting the amount of motionless air within the cooling setup due to all parts moving. As it spins quite slowly, you get the added benefit of noise reduction, too.
The Sandia Cooler works by using a hydrodynamic air bearing. What that means is when it spins up the cooler actually becomes self supporting and floats above the chip (hence the thousandth of an inch clearance). Cool air is drawn down the center of the cooler and then ejected at the edges of the fins taking the heat with it. And as the whole unit spins, you aren’t going to get dust build up (ever).
The good news is Sandia has already signed a licensing agreement to have the cooler offered as a CPU cooling solution. We don’t know which company licensed it, but at least that means we won’t be waiting too much longer to try it out. It also has applications for lighting and air conditioning systems. What we don’t know is if the cooler can work vertically as most desktop cases require. The floating while rotating makes me suspect it won’t.

Lose the carpet (preferably), and get a HEPA air cleaner (and/or electrostatic precipitator, if you don't mind minor ozone generation); they're not very expensive. If you have forced-air central heating, supplement with a 3M Filtrete [filtrete.com] furnace intake filter (top-rated in the June issue of Consumer Reports; HEPA/EP air cleaners also reviewed in that issue).
No more ghost farts. Your lungs and (sentient) machines will thank you.