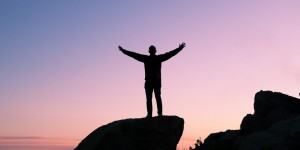 You look at the lives of your favorite celebrities, athletes or musicians on tv. You want to be them so bad you don’t even want to be yourself.

You think “Fuck, it must be nice to live the life they live. Fast cars, nice clothes, money that they can spend on whatever they want whenever they want, and not have to worry about making it back”.

They have it made, they don’t even have to work for anything in life. I wish I had a beautiful life like theirs.

This is understandable, I can tell you the few celebrities I have idolized in my lifetime, it happens. However, you will never find yourself if you keep comparing yourself to the lives of others – to your favorite rapper, to that bodybuilder with the custom Nissan GTR that’s one of the top 5 fastest cars in the world, to your favorite actor with the legs of an olympic sprinter and the arms of a football quarterback.

I was there before, I remember my first ever idol was in the WWE days, The Rock.

Back when he was Rocky Maivia, though I still to this day can’t put my finger on why. All I know is I used to see him beat people up in the ring, he had the toned muscles and the positive, optimistic smile that made you only wonder just how good his life was.

I can’t remember how old I was, I think I just gravitated towards him because of his charm on the TV screen.

Other than him, the only person I’ve ever idolized from a non-financial standpoint would have to be Kobe Bryant, but like I explained in an earlier post this was due to his mindset and his focus, his drive and determination gave me the inspiration to be the same way in my own life when it came to my own pursuits.

Since then I’ve only ever looked up to a man for teaching me important lessons about wealth, success and life – I can not bring myself to overtly support another man just because he can dribble a basketball or rap some words over an instrumental.

You are too focused on those who are superior to you.

You must build your independence, both socially and mentally. Free yourself from the distractions and the comparisons, you can never be anyone on this earth but yourself, so make your name and your Brand the most recognizable one of you in the world.

You want to be your favorite rapper or singer and live the life they portray shopping all day, touring and making music.

You want to be your favorite athlete and hear the screaming fans, the adoration from the random people who love you, the tv and media fame that comes with it.

But what they don’t tell you about are the meetings, the annoying people, the different agencies you have to associate with, the numerous people who try to run you and tell you what to do as to avoid scandal.

They won’t tell you that you can’t be them – that you can be in the same job field or area as they are, but no one will ever look at you like they do them.

They wont tell you of the people they had to hurt, the things they had to do that you wouldn’t, the price they had to pay to climb the bloody, rusty rungs of the ladder to success.

They will tell you of the many hardships and struggles they have undergone to completely shape themselves and the story of their life. You can’t match this.

They will tell you of their mindset and the way they run their lives everyday. You can’t match this.

You keep thinking one day you’re going to shoot enough shots and score enough points to make it to the NBA and be the next Stephen Curry.

You think one day your music will be heard by the right person and you will be the next Future or Drake or Nicki Minaj, you think you will get signed to Kanye’s record label and break the new record for most albums sold in a week.

It will never happen.

You think you’ll be the next Scorsese or Tarantino? The next Michael B. Jordan or Brad Pitt?

I don’t mean to crush your dreams, but by doing this I am likening you to them in a sense, which is where you can learn the most from this lesson. Read on, I will break it down and explain it simpler.

All of these people had multiple people who told them they weren’t going to make it in life. Keep in mind this isn’t what I’m preaching to you – you can and you will make something of yourself, you will reach the pinnacles of greatness due to your desire.

However, it wont be by climbing the same path, the same steps on the stairway, the same rungs on the ladder of life as your favorite celebrity.

They have been through the pain and struggle of being told they won’t go anywhere further, they weren’t cut out for their craft, they weren’t talented or dedicated enough, there was someone else readily available that was better than them.

But do you know why they’re where they’re at now instead of sulking and dwelling at some remedial 9-5 job about what their life could have been?

Because instead of putting their time into being the next someone else, instead of focusing on being the person that they feel like made something of themselves, they corralled all of their efforts, desire and focus into doing the exact same thing.

They put their desire and focus into establishing their own name as a Brand, to making their own success, to becoming the independent and self made person they always dreamed of.

You must be the first of your kind, you must be unique, driven and passionate in your focus. You must develop a worldly sense of confidence and self worth, and this all comes from recognizing that you have the power to make yourself something as long as you use your resources wisely and effectively.

You never want to be compared to the next person, no matter how great they are – this is all you will ever be seen as. You will never be able to usurp their shadow, the mutiny you rally when you have made your preparations will be put down like a rabid dog by those that have already categorized you.

Grouped you into a place in their mind already inhabited by another, more superior human being.

Humans largely play word association with names, places and objects but when people hear your name should their first thought be of You?

When you think about your name does your mind first identify with yourself, or another person?

If the latter applies, this person is who you must be better than, not emulate.

Your Daughter will be fucked before marriage – and it’s ok!