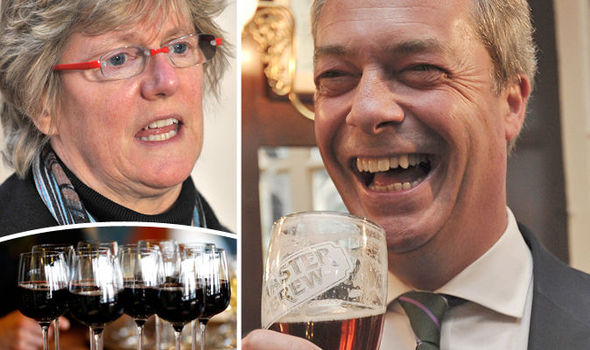 The UK Independence Party leader – a famously happy drinker often pictured with glass in hand – agreed Britain had a problem with binge-drinking.

But he said new guidance from England’s “appalling puritanical” Chief Medical Officer Dame Sally Davies that there is no safe level of alcohol consumption, because of the increased cancer risk, was “over the top” and counterproductive.

Mr Farage told LBC radio his response to being told drinking could shorten his life was “So what?” and he joked that according to Dame Sally’s tables “I’m now 25 per cent more likely to die than I thought I was last night when I went to bed”.

He declared: “I think we ought to have a mass protest against this form of nannying.

“I think we should all go out at lunchtime and have a glass of something.

“We all know there is a big problem with excessive alcohol consumption in this country. There’s a problem with the binge-drinking mentality – even intelligent youngsters go out on Friday nights with the intention of getting hammered.

“But frankly, if we choose to enjoy a few drinks four or five nights a week after a hard day at work, whether it slightly shortens our lives or not, so what? Do what you enjoy.

“I think to basically tell us that any form of drinking is likely to lead to our deaths is just so over the top that we will probably behave in the opposite way. I certainly will, starting at midday today.” 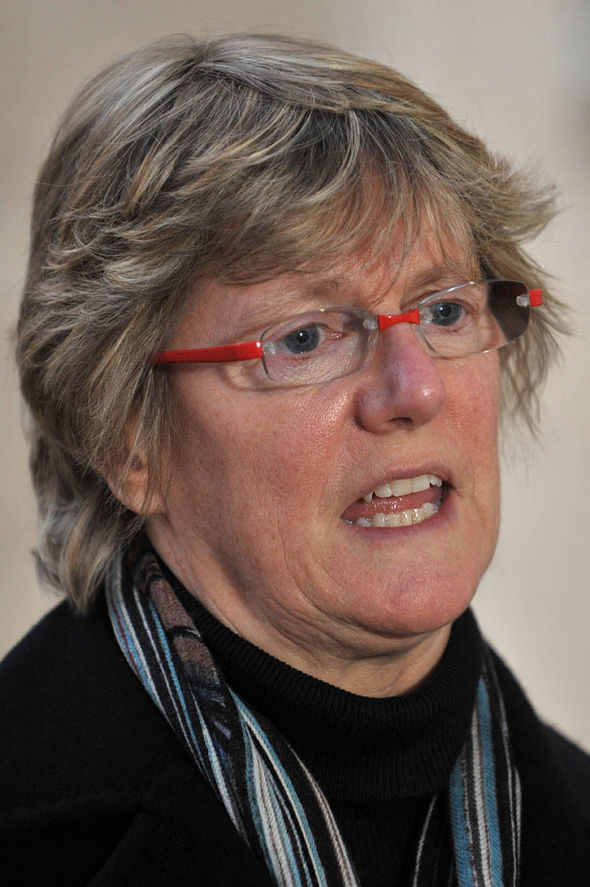 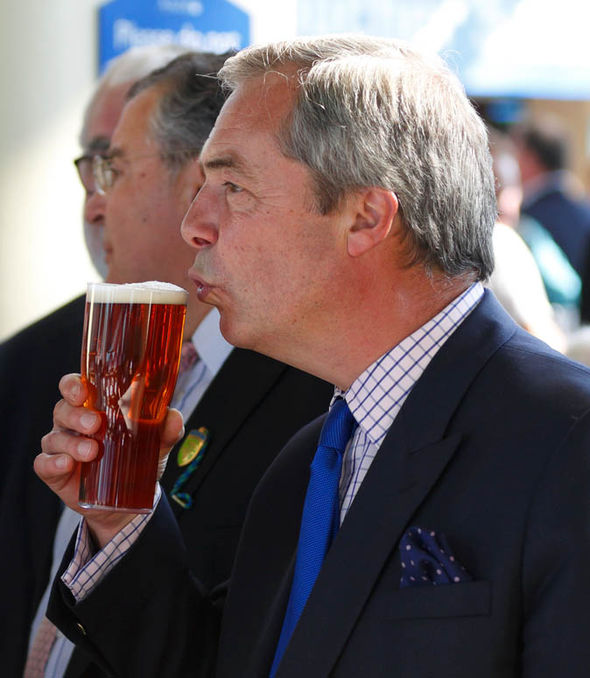 UKIP leader Farage is often pictured with glass in hand

Rob Lyons, of Action on Consumer Choice, commented elsewhere: “The claim that there is no safe level of drinking flies in the face of the weight of studies showing that those who drink moderately have better or similar health outcomes to teetotallers.

“The new guidelines seem devoid of common sense. They will be widely ignored by most drinkers but will cause unnecessary alarm for some.

“The real danger is they will be used to justify more nanny state policies, from higher prices and alarmist health warnings to further restrictions on the sale of alcohol.”

Downing Street said it was up to individuals whether they followed the new guidance, which also cuts men’s recommended maximum weekly intake from 21 to the women’s level of 14 units, to keep cancer risks low.

“It’s right that the information is out there and it is up to individuals whether or not they wish to look at that and take it into account,” said spokesman. 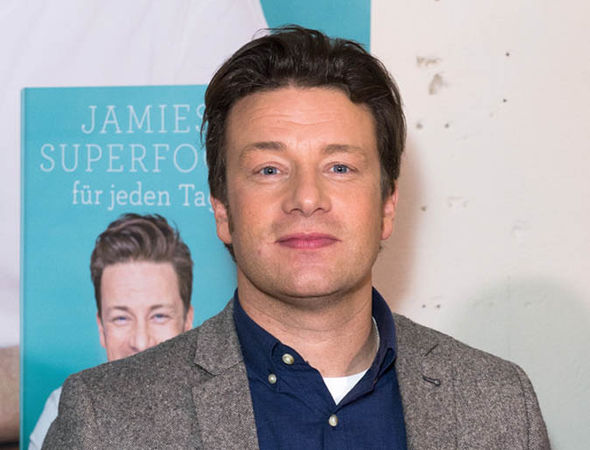 Asked if Mr Cameron drinks less than 14 units of alcohol a week, he replied: “I haven’t discussed the Prime Minister’s nutritional intake with him.”

Sugary food and drink will be taxed more heavily if the industry does not act to reduce sugar content and portion size and scale back promotions and advertising, Chief Medical Officer Dame Sally Davies said today.

David Cameron has said he does not want to introduce a “sugar tax” – for example on sweetened drinks as celebrity chef Jamie Oliver is demanding – but this week declined to rule it out as a way to tackle Britain’s obesity problem.

Dame Sally told BBC Radio 4’s Today programme: “There is no silver bullet for obesity. This is complex.

“While sugar tax is totemic it is not going to have the biggest impact.”

But she said Mexico’s example where a 10 per cent levy on sugary canned drinks was introduced at the start of 2014 and purchases had dropped 12 per cent by the last month of that year suggested a tax would have an effect.

“I’ve already put industry on notice that if they don’t respond in the other ways, we are going to have to have a sugar tax,” she said.

A Downing Street spokesman said Mr Cameron had been clear this week about the need to tackle obesity and to remind people how it can lead to health problems like diabetes and cancer.

But the spokesman said people should wait to see what the Government’s forthcoming childhood obesity strategy recommends.