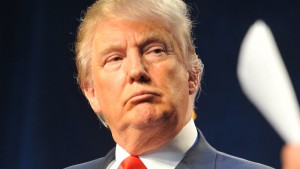 I couldn’t help myself. Confronted with the video dilemma presented by the Trumpian Secession of 2016, I chose to follow the Donald’s white plume and watch his fundraising event in Des Moines for wounded veterans. I did start out sitting in front of the Fox News-Google Republican debate in which Trump had refused to participate. But in the end I felt forced to act on the premise upon which Trump had relied in his power struggle with Fox.

Which is this: Trump is better television. There has never been anything like him, and his candidacy for the Republican nomination may not last much longer, even though the professional oddsmakers now have him 50-50 to win. If I want to watch Republican senators recite platitudes, I can watch C-Span anytime.

I was not the only one to choose Trump. On Wednesday, rival candidates Rick Santorum and Mike Huckabee, who were eligible to participate in the preliminary Fox News debates for back-rank candidates, announced that they would attend Trump’s soirée instead. Trump welcomed them fondly to the stage, making a show of setting aside political differences for a good cause. But he visibly relished the chance to treat opponents as grovelling ambassadors of fallen empires.

It looked like nothing more than another sponge bath for Trump’s ego. But, as someone eventually pointed out, Santorum actually won the Iowa Republican caucuses in 2012. And Huckabee won in 2008.

Iowa’s prominent place in the party primary system is often justified on the grounds that it is a highly typical U.S. state, a perfect measurement sample of middle American values. (No one ever works the word “white” in there when discussing Iowa or its partner, New Hampshire. That part is left implicit, just like the extra political power our Senate gives to the paler Canadian provinces.) But every student of physics knows that the act of measurement influences the experiment, and one can’t help suspecting that Iowa’s position in the American political process may actually be making the state weirder.

As Santorum and Huckabee remind us, right-wing candidates who shrivel like vampires in the sun of other states often do well in Iowa

If you have watched the Iowa caucuses unfold live on C-Span, you know they reward fervour as much as organizational ability. A few people with fringe beliefs and free time may count for as much as a hundred names on a mailing list. As Santorum and Huckabee remind us, right-wing candidates who shrivel like vampires in the sun of other states often do well in Iowa.

Steve Forbes ran a very strong second there to G.W. Bush in 2000; the downright bizarre Alan Keyes finished third. Pat Robertson took 25 per cent of the votes in ’88. Ron Paul, outsider of outsiders, finished a bare smidgen behind Santorum. That bodes well for Donald Trump (and it offers hope to Ron Paul’s son Rand, who barely qualified for the main Fox News debate but brought the loudest following to the hall).

It’s a strange election season, all right. Scott Adams, best known as the creator of “Dilbert,” has carved out a niche on his weblog as the leading expositor of Trumpian strategy. Adams believes Trump is literally hypnotizing the American public, using an arcana of powerful persuasion methods. The cartoonist disavows any claim to support Trump per se, but he has remained bullish even as other commentators predicted disaster after every grandiose halfwittery or scornful bon (?) mot.

Adams’ Trump-as-Master-Persuader schtick is becoming tacitly influential, I think, among chastened journalists who thought Trump would crash months ago. When the revered psephologist Nate Silver did a dramatic U-turn last week and admitted that he had harmed his prophetic bona fides by underestimating Trump, one could not help thinking of it as a surrender — could not help envisioning the sudden cinematic crumbling of a mighty fortification built out of Excel spreadsheets and wishful thinking. Silver almost seemed … relieved.

The problem with Adams’ analysis is that he never gets too specific about what Trump’s secret techniques actually are. In practice it seems to boil down to “Develop the conviction that you are a winner, whatever the evidence actually suggests, and pour that conviction into every word, gesture, and manoeuvre.”

That certainly accounts for much of Trump’s appeal to the American public. (As George S. Patton said, Americans love a winner.) Trump also infuriates the “right” people, and that will automatically attract a certain following. He has a starry-eyed following among neo-fascists and conspiracy theorists of various flavours, who would never otherwise venerate a billionaire advocate of single-payer medicare and corporate bailouts. They like him for explosively expanding the possibilities for what can be said out loud in politics.

The metaphor that comes to my own mind over and over again is that Trump is a suicide bomber, but with video-game respawn powers. He put on a dynamite vest and hugged Jeb Bush — to smithereens. He put on another, and blew a huge hole in the Fox network’s puppeteer-like control of the Republican Party. On Thursday night, he certainly lost some Iowa votes by absenting himself from the Fox debate. But he also, having tormented Ted Cruz for a week about his Canadian birthplace, left him alone to face other top candidates. On cue, Cruz, whose poll numbers made him a target with Trump absent, ended up blowing his top unattractively at debate moderator Chris Wallace.

The humiliating pilgrimage of Santorum and Huckabee to Donald Trump’s side is taken as the latest sign that the Republican Party is slowly habituating itself to Trump’s possible victory at the July convention. They seem to be gradually acknowledging his strengths, which are genuine. The man is a recognized expert in the theory of business negotiation, and while he may not be the levitating wizard of Scott Adams’ imagination, he is awfully good at psychological framing. He polls so well with independents that the inner GOP, confronted with poor alternatives, might talk itself into getting behind him as a sort of high-volatility strategy, like pulling the goalie in a hockey game.

At even odds I am still taking the field against Trump. But the damage to the American political structure is already real, as the whispers of a Michael Bloomberg independent candidacy suggest. The Democrats might conceivably nominate Bernie Sanders, who literally said “I am a Democrat now” for the first time in his life on Nov. 5. The New Hampshire Democratic Party would not put him on the primary ballot unless he actually took the trouble to join.

November’s election could hence be a three-way fight between the “Republican” Trump, a professed ex-Democrat and major Democratic donor; the “Democrat” Sanders, who was not yet a Democrat as of his 74th birthday; and Bloomberg. If that happens, surely we can stop talking about the two-party system being endangered and start shopping for a box to bury it in.

The biggest moments for LGBTQ rights in 2015

It’s not just the Oregon militia: Why many Westerners get angry about federal land rights