Home
Health
Couple reveal stress of shock test results: 'I was diagnosed with breast cancer, but it nearly killed my husband' 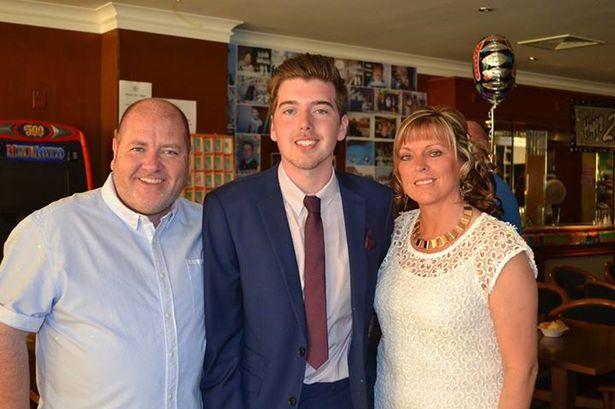 WHEN Sheila Mclaughlan was diagnosed with breast cancer , she admits the shock of the diagnosis was so traumatic it almost killed her husband.

Taxi driver Steven suffered a heart attack just two hours after doctors broke the news that his wife of almost 25 years had the disease.

An ambulance rushed him back to the hospital where Sheila had just been given her cancer diagnosis and surgeons had to act quickly to save his life.

Now, just 15 months on, the couple are both feeling fit and well and had a big celebration for Steven’s 50th birthday on Hogmanay.

And as they look forward to the year ahead, Sheila says they hope to put the most horrific day of their lives far behind them.

Sheila and Steven on their wedding day at Grena Green

“We had gone to the Western Infirmary in Glasgow and I had been told that the dimpling I had spotted on my breast was down to breast cancer.

“Steven and I were in shock and very upset and had gone home to break the news to our son Sean.

“But once we were home, Steven went into the kitchen to make a cup of tea and he took ill. It was utterly terrifying.

“Within two hours of my diagnosis, we were back at the Western Infirmary where Steven was being told he had suffered a heart attack and would need an urgent operation to save his life.

“All thoughts of me having breast cancer just disappeared and my only concern was for Steven.”

Sheila had been diagnosed with breast cancer after spotting what looked like a bruise on her left breast.

She had gone to her GP, who referred her to hospital for tests.

Sheila said: “I never expected to be told I had breast cancer.

“I was coming out of the shower and in the mirror I caught sight of what I thought looked like a bruise on my breast but when I looked closer I could see dimpling.

“I couldn’t feel any sort of lump but I knew I should go to my doctor and get it checked out.

“When I was referred on to hospital, they carried out one test after the other and we were told I had breast cancer.

“Steven and I were devastated but we never expected what was going to happen next.”

The couple with their son

Steven says that, before the day of Sheila’s cancer diagnosis, he had suffered no chest pain and no other warning sign that he might be likely to have a heart attack.

But he had lost his father to a heart attack just months earlier.

Doctors have told him that the stress of Sheila’s diagnosis will have played a role in his collapse.

Steven said: “I had felt absolutely fine within myself before Sheila’s diagnosis but obviously the day we found out she had breast cancer was a very stressful day.

“After we had broken the news to Sean, I went into the kitchen to make us a cup of tea. I remember I started to feel incredibly hot.

“I got myself a cold glass of water from the fridge but I was literally dripping in sweat.

“I remember pulling the shirt off my chest Incredible Hulk style and feeling this terrible pressure as if someone was kneeling on my chest. I knew exactly what was happening.”

When Steven collapsed, he was rushed to the Western Infirmary before being transferred to the Jubilee Hospital, where he underwent surgery to have a stent fitted.

Tests later revealed a blood clot on his heart and he has since had a further operation to have an ICD device fitted to restart his heart should it ever stop again.

As Steven recovered, medics began a number of tests on Sheila to determine what type of cancer treatment would best suit her.

Almost three months after her diagnosis, she underwent a mastectomy operation with reconstruction and was told she would need to take the drug Tamoxifen for at least five years .

While Sheila and Steven now both receive regular check-ups, they are determined to put what happened behind them and live life to the fullest. Earlier this year, they celebrated their 25th wedding anniversary.

And they marked Steven’s 50th birthday on Hogmanay surrounded by family and friends on holiday in Lanzarote.

Sheila said: “Steven and I met on a sunshine holiday and were featured in the Sunday Mail in a story about holiday romances.

“Our romance has led to us being married for 25 years and we have a wonderful son, Sean, 23, who has been through so much with us over this last year.

“But Steven and I are back to health, work and looking forward to the future. We both know how lucky we are to be here.”

Steven added: “We looked after each other and, if anything, it made us realise never to take those you love for granted. It actually made us fall in love with each other all over again.”

In November, Sheila appeared as a model in the Breast Cancer Care Scotland fashion show. The charity were a great source of advice following her diagnosis.

She said: “Being diagnosed with breast cancer can be terrifying and very stressful.

Breast Cancer Care offer so many services to support anyone who has had a diagnosis and help them move forward.

“I’ve supported the charity for more than 15 years and never imagined I’d need their support but I am so grateful for it.”

Cocaine use can cause brain to start eating itself, says new research

'Untreatable' strain of gonorrhoea breaks out across the north of England

One billion cakes in a year: Scotland's love affair with sugar is a big fat slice of a health disaster