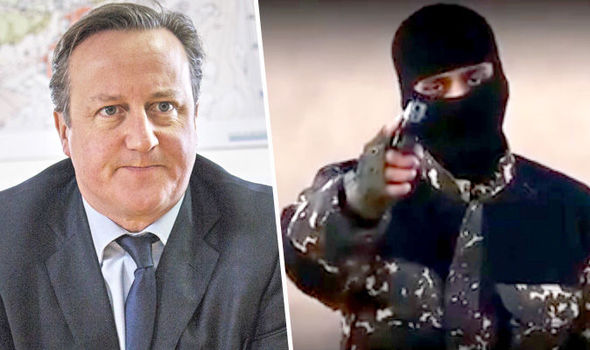 Security services yesterday began examining footage of a masked extremist with a British accent who threatens attacks on the UK along with a “message for David Cameron”.

The militant has since been dubbed the ‘new Jihadi John’ following the death of Briton Mohammed Emwazi in a drone strike last year.

The Londoner had previously appeared in a number of ISIS videos showing the brutal murder of a series of Western hostages, including British aid workers David Haines and Alan Henning.

A young English-speaking boy also features in the propaganda video, which shows the killing of five men accused of being UK spies.

The child points into the distance and says: “We are going to go kill the kaffir [non-believers] over there.”

Downing Street today cast doubt on the terror group’s claims those murdered in the video were spies, while the Prime Minister accused the jihadists – also known as ISIS, ISIL or Daesh – of “absolutely desperate measures”.

ISIS recently lost control of the key city of Ramadi in Iraq, amid claims the jihadists are collapsing in the face of local ground forces backed by US-led coalition airstrikes.

Speaking to LBC Radio about the new video, Mr Cameron said: “I think it is absolutely desperate tactics from an organisation that is clearly now on the backfoot.

“It’s losing territory. It lost Ramadi, but what is so clear about it is that they continue to use the most disgusting and repulsive tactics and actions which demonstrate exactly who these people are and I think that’s plain for everyone to see.”

I think it is absolutely desperate tactics from an organisation that is clearly now on the backfoot.

Before Christmas, MPs voted to expand RAF airstrikes across Iraq’s border into war-torn Syria, where ISIS holds the city of Raqqa, the self-declared capital of its ‘caliphate’.

Mr Cameron added that stepping up Britain’s action against the jihadists would eventually spell the end of the terror group.

He said: “What you can see is we have taken the fight to ISIL and we’ve done that by the brave action of the RAF over the skies of Iraq and now Syria. We’re doing it by stopping people travelling out to join ISIL.

“We’re doing it by dealing with radicalisation in our own communities. We’re doing it as part of an international coalition because it can’t be said too often, this is not the true religion of Islam, which is a religion of peace.

“These people have perverted the religion and are calling on people to do appalling things and we will face them down.

“In the end, our values of democracy and tolerance and freedom are so much stronger than theirs that we will win this fight, but we have to make sure we commit everything to it.”

The Prime Minister’s official spokeswoman earlier revealed British forces had carried out 11 airstrikes on ISIS targets in Syria since the MPs authorised action last month, including an attack on checkpoints near Raqqa on Christmas Day.

She also expressed doubt on the jihadists’ claim they had murdered the five men after the group “confessed” to taking money in return for filming and photographing sites within Raqqa.

She said: “This does appear to be a propaganda tool and not all of ISIL’s propaganda in the past has been true.”

A member of a Raqqa-based group, which opposes ISIS, has since claimed the victims included shopkeepers and businessmen from the town.