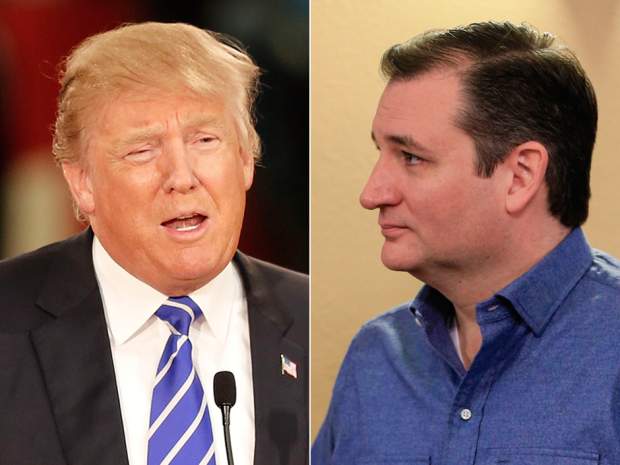 Donald Trump may not question U.S. President Barack Obama’s birth certificate anymore, but on Tuesday he hinted that rival Ted Cruz’s Canadian origins could bar the Calgary native’s path to the presidency.

“I’d hate to see something like that get in his way,” Trump said in comments to the Washington Post.

“But a lot of people are talking about it and I know that even some states are looking at it very strongly, the fact that he was born in Canada and he has had a double passport.”

Cruz, the Texas senator battling Trump for the “outsider” vote among registered Republicans, was born in Calgary in 1970 while his parents were working in the oil business. He was a dual citizen at birth, receiving his U.S. citizenship through his mother.

In 2014, however, Cruz renounced his Canadian citizenship. “Being a U.S. Senator representing Texas, it makes sense he should be only an American citizen,” said a spokesperson at the time.

The U.S. Constitution limits the presidency to “natural born citizens,” which many have interpreted to mean that a candidate must be born in the United States. Legal scholars, however, generally agree the description covers foreign-born children of U.S. parents.

John McCain, the Republican presidential candidate in 2008, for instance, was born in the Panama Canal Zone to U.S. parents. Although law professors at the time did dispute McCain’s eligibility, he was able to run. The Arizona Senator was backed by a nonbinding Senate resolution declaring that he was eligible to be president.

“Republicans are going to have to ask themselves the question: ‘Do we want a candidate who could be tied up in court for two years?’ That’d be a big problem,” said Trump on Tuesday.

In reply Cruz recalled a famous TV episode to suggest that Trump’s candidacy has “jumped the shark.”

“My response to Donald Trump calling into question my natural-born citizenship,” read a Tuesday afternoon Tweet by Cruz linking to a YouTube clip from a 1977 episode of Happy Days featuring the character Fonzie jumping over a shark on water skis.

The moment is often cited as the point at which the series’ quality began to plummet, and the phrase “jumping the shark” has since come to signify the moment at which a television show or institution begins to outlive its relevancy.

It’s not the most obscure reference ever used by the Texas senator. In 2014, he gave a U.S. Senate performance of the “First Oration Against Catiline,” a speech from 63 BC first delivered to the Roman senate by the famed orator Cicero.

Long before he joined the 2016 race, Trump was one of the most high-profile purveyors of a “birther” conspiracy theory holding that Obama was born in Kenya and was thus inaugurated illegitimately.

Trump has never renounced the theory, but now says “I don’t talk about that anymore” when asked about it in interviews.

Cruz has recently emerged as a key rival to Trump’s lead among Republican voters for the nomination, and the pair have increasingly locked horns in the lead-up to the Iowa caucuses.

“In all fairness, to the best of my knowledge, not too many evangelicals come out of Cuba, OK?” Trump told supporters in December in reference to Cruz’s Cuban heritage.

Francis Wilkinson: Obama’s remedy for America is to crush Republicans