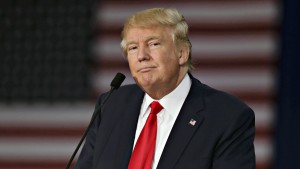 FENTON, Iowa — Dan Smith stood for three hours in the cold, as the sun went down and the line inched forward to see the man he thinks can make America great again. Smith retired recently. He wrecked his knees at work and couldn’t go back. But the wait didn’t bother him, he said. After all, when next would he get the chance to meet a man like Donald Trump?

The rally, a pageant of last-minute planning and default Americana, unfolded directly opposite the final Republican debate before Monday’s Iowa caucus. For Trump it was a chance to revel alone on stage, take shots at foes (he mocked Fox, imitated Jeb Bush and used the word “China” as a punchline) and avoid the one enemy who still matters to him in Iowa: Texas Sen. Ted Cruz.

For all the weirdness and unexpected vitality of the Trump campaign, there’s something perhaps stranger about Cruz, or at least about his party’s reaction to him. Trump isn’t the first outsider to jump out early in primary season by bashing his own party’s elites. John McCain did it in 2000. Barry Goldwater made a career of it.

But in the past, Republicans have had a mainstream — for their party, anyway — alternative to rally around. When McCain got too feisty 16 years ago, for example, the party turned to George W. Bush.

This year, the logical alternative to Trump, at least if you go by the polls, is Cruz. In Iowa the two are running almost neck and neck. In the national polls, Cruz remains the only candidate within spitting distance of Trump. Yet, with days to go before the caucus, no one is rallying around Cruz. In fact, it’s just the opposite.

It’s not because of his policies, necessarily, or his resume: it’s just him. Republicans who have worked with Cruz, according to many accounts, just can’t stand him as a person. In her account of the debate Thursday, the New Yorker’s Amy Davidson called the other candidates’ “apparently visceral dislike” of Cruz “one of the most genuine emotional responses heard on a debate stage in a long time.” And that dislike may, remarkably, turn out to be a key factor in the Republican race.

Early Friday morning, not long after the debate, Cruz set off on a bus tour of northwest Iowa. At just before 1 p.m., he rolled into Fenton, a farming town south of the Minnesota border.

On the campaign trail Cruz dresses like an ophthalmologist on a ski vacation. On Friday, he wore dark jeans, a button-up shirt and a blue sweater unzipped at the neck. Like many trained debaters, he comes off as both perfectly drilled and not fully human when he speaks. His talking points flow naturally. His cadence is measured: quiet then loud then back again, and his hand gestures look torn from a Toastmasters instructional tape.

Still, there was nothing about Cruz on the campaign trail, not Friday anyway, that was wildly outside the political norm. The crowd in Fenton greeted him warmly. It’s a tiny town and many were there just because he came. But he earned applause that was more than polite and afterward some locals said they admired his consistency, even if they didn’t agree with everything he said.

It was, in other words, a bog standard campaign event, especially compared with the circus Trump unleashed 18 hours earlier in Des Moines.

There were some gawkers in the Trump crowd Thursday. One student waiting in line told a reporter from Belgium he was there only for the show. But a handful of protesters notwithstanding, most of those who made it inside were hard-core Trump converts.

Dan Smith showed up at 3 p.m. to ensure a good seat for the event, which didn’t start until after 8. He was there, he said, because he thinks Trump can help him personally. Smith lost his insurance after quitting his job in heavy machinery. For a while he was on his wife’s plan, but they lost that too. They shopped around for something they could afford, but the only plan they found turned out to be a scam.

Smith isn’t sure how Trump would fix that issue. But he does think he’ll care.  “We called our congressman. He pretty much blew us off,” he said. He also thinks Trump will do something about another issue close to Smith’s heart: the economy.

“I think he’ll help everybody,” Smith said, smiling through his white beard. “I’m not quite his age but I remember what it was like when I was a little kid, the wages and stuff … They haven’t kept up with the times … I think he’ll be able to bring them back.”

For Smith, the key to doing that is closing the border and driving illegal immigrants out. It’s a not-unusual sentiment among Trump supporters. Smith also blames immigrants for a whole host of other ills. “I live in a town where there’s a packing house and the crime rate has gone up quite a bit,” he said.

But the most jarring thing about Thursday’s event wasn’t the people, or some of their views. It was instead the air of utter plausibility.

Donald Trump started off a sideshow. But at the rally he wasn’t just top billed, he was the only act. Even if he remains ridiculous, the idea of him winning clearly no longer is. In fact, given the widespread antipathy for his No. 1 foe, he may actually become the preferred choice for party brass before primary season ends.