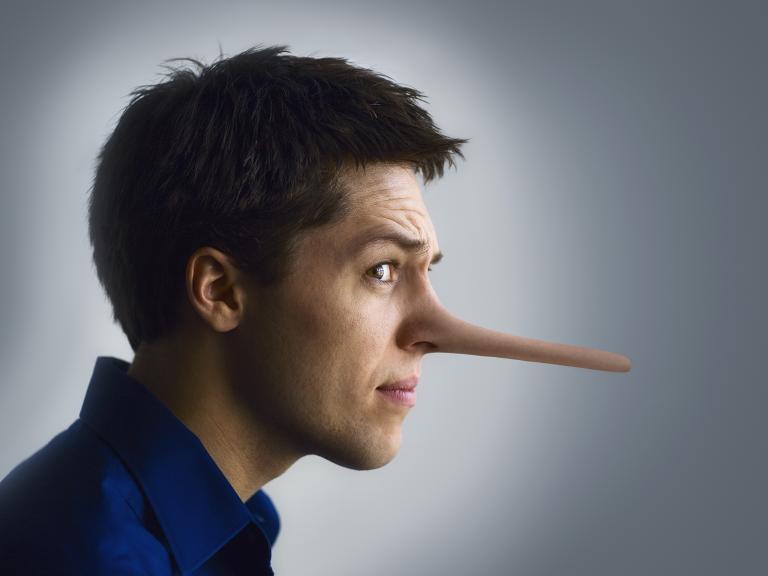 Just about everyone you know tells low-stakes lies, but some people even go so far as to lie about important matters that could forever change their relationships, end their employment, or even send them to jail.

Detecting high-stakes liars is often the work of the FBI, and they frequently look to facial expressions, body language, and verbal indicators as signals, or “tells,” that someone is lying.

Mark Bouton, an FBI agent for 30 years and author of “How to Spot Lies Like the FBI,” tells Business Insider that he used certain tells to help identify Timothy McVeigh as a suspect in the Oklahoma City bombing. But being able to read facial expressions to detect lies can be beneficial even if you’re not conducting criminal investigations, he says.

“There are a number of facial expressions and associated reactions that could indicate someone is lying to you,” he says. “Some are caused by nervousness, some by chemical reactions, and others by physical reactions.”

“It’s best to observe someone for a while as you make small talk or ask innocuous questions, in order to see what his usual reactions are.”

To start, he says it’s important to understand how the person in question normally acts.

“It’s best to observe someone for a while as you make small talk or ask innocuous questions, in order to see what his usual reactions are, including tics he may have,” he says. “Then if he exhibits several lying indicators when you ask more pointed or suggestive questions, and these are not ones he previously performed, you can be confident that he’s likely lying.”

Here are some of the facial expressions Bouton suggests looking out for:

Eyes darting back and forth

“This is a physiological reaction to him feeling uncomfortable or trapped by your questions that he doesn’t want to answer,” Bouton says. “It’s a throwback to when people had to seek an escape route when they feared they were in a dangerous situation, such as facing a human or animal adversary.”

“A person will ordinarily blink about five or six times a minute, or once every 10 or 12 seconds,” Bouton says. “When stressed — for instance, when someone knows he’s lying — he may blink five or six times in rapid succession.”

Bouton says exceptions to the usual blink rate mostly have to do with production of dopamine in the body. For example, a person with Parkinson’s disease will have a noticeably slower blink rate than what is usual, while a person with schizophrenia will blink more rapidly than normal.

Closing eyes for more than one second at a time

Bouton says that when a person closes his eyes for a second or two, this may indicate he’s lied to you, since this is a type of defense mechanism. Normally, he explains, a person will blink at a speed of 100 to 400 milliseconds, or 0.10 to 0.40 of a second.

Looking up to the right

Bouton says that left-handed people will usually have just the opposite reactions.

And some people will stare straight ahead when trying to recall a visual memory, he says.

Looking directly to the right

Looking down to the right

Bunched skin beneath and wrinkles beside the eyes

Bouton says that when people genuinely smile, the skin around their eyes bunch and wrinkle.

Bouton explains that a chemical reaction causes people’s faces to itch when they lie.

“A person’s mouth will often go dry as she’s lying,” Bouton says. “She may do a sucking motion, pursing her lips, to try to overcome this.”

When their lips are so tightened that they appear pinched and white, this can indicate lying.

Bouton says sweat may appear on the forehead, cheeks, or back of the neck, and you’ll likely observe the person try to wipe it away.

Blushing is an involuntary reflex caused by sympathetic nervous system (this activates your fight-or-flight response) and is a response to the release of adrenaline.