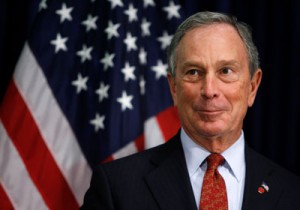 Perhaps the most appealing aspect of the trial balloon floated by former New York mayor Michael Bloomberg – who is letting it be known he might run for president – is that it gives pundits someone to talk about besides Trump, Cruz, Clinton and Sanders.

Bloomberg’s plans leaked out over the weekend, via unnamed sources said to be close to him. If he ran it would be as an independent. He wouldn’t have to win any primaries, because he doesn’t represent any party. He wouldn’t need to raise much money because he’s filthy rich and can pay his own way. He’s said to be motivated by dismay at the quality of the candidates currently on offer.

Join the club. One of the more dispiriting aspects of this year’s pre-presidential contest is that it forces pundits, analysts, observers and commentators to focus on people they really don’t take seriously. It appeared the nadir had been reached when Trump appeared on stage last week to welcome the endorsement of Sarah Palin – until Trump came along the epitome of someone unqualified to be president. But then Trump topped himself (or bottomed himself, as the case may be) by declaring he could “shoot somebody” and still not lose voters, following up by mocking a man in a turban who was ejected from one of his rallies. There is evidently no point so low it can be said Trump has “reached bottom”.

The potential for a Bloomberg campaign opens intriguing possibilities. As mayor of New York for 11 years he did a credible job. He began as a Republican but shifted to independent status in 2007, yet holds many views with which Democrats could be comfortable. Many moderate Republicans would surely be tempted to choose him over Trump, out of sheer embarrassment. He could hold a similar appeal to moderate Democrats, wary of Clinton, alarmed at the party’s lurch to the left and attracted by a “progressive” candidate who clearly understands how to operate a budget.

Bernie Sanders and Hillary Clinton, not surprisingly, were said to be “cool” to his plans. Sanders, the socialist senator from Vermont, dismissed Bloomberg as just another billionaire, like Trump. “That is not what, to my view, American democracy is supposed to be about, a contest between billionaires,” he said.

Bloomberg might hurt Democrats more than he would damage either Trump or Cruz, who presumably have the yahoo vote sewn up.

But the key is that Bloomberg isn’t like Trump. Other than being rich, he’s not like Trump at all. First and foremost, he’s not an obnoxious egomaniac with no real policies and few tactics other than insulting opponents and bragging about his wealth. He’s a better businessman, having worked his way up the ladder rather then getting a head start with Dad’s money, like Trump. He’s much richer — $38 billion to $8 or $10 billion, though Trump’s real wealth is never clear. He has actual political experience, having run the country’s biggest city for over a decade. He can get along with people holding divergent views, unlike Trump, who dismisses critics as “losers”.

His approach would be the opposite to Trump’s: According to the New York Times Bloomberg would give a series of policy speeches backed up by heavy advertising. Trump’s campaign is all self-advertisement backed by broad proposals to kick out immigrants and ban Muslims. As presidential candidate, Bloomberg cuts a credible figure. Trump is a cartoon character.

Yet Bloomberg might hurt Democrats more than he would damage either Trump or Cruz, who presumably have the yahoo vote sewn up. Such is the decline of  Republican civility that its members seem willing to vote for anyone chosen to lead the party, no matter how ill-suited. Trump said he would welcome a Bloomberg candidacy, likely in the hope it would split the Democrat vote and boost his own chances. If that appears the likely outcome, would Bloomberg still run? It seems more likely he’s alarmed at the possibility of a Sanders victory, and sees himself as a better candidate in that scenario.

No independent has ever won the White House, of course. None has even come close. And with Congress entirely in the hands of self-interested Democrats and Republicans, it’s questionable how an independent president could operate effectively.

So maybe the chief benefit of Bloomberg’s trial balloon is the reminder it offers that there are, indeed, credible, sensible and experienced people who could be chosen as presidential candidates. If only one of the major parties would nominate one.