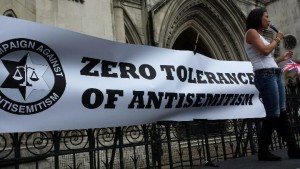 When Jewish men in Marseilles, France, are being warned against wearing religious skullcaps because they might provoke violence, the only reasonable response is for the all the men of Marseilles to begin wearing kippas whenever they appear in public, in order to show the anti-Semites exactly what they’re up against.
David Foy, Calgary.

Using Judaism’s pikuach nefesh to justify the removal of skull caps, in order to avoid attacks, sets a dangerous precedent. What will Jews be asked to do next: shutter their shops, close their synagogues or, as is happening now, leave the country?

The time to stand up is now. We must begin by shaming the UN into terminating its support of the Muslim-majority countries that are trying desperately to destroy Israel with lies and we must hold Islam accountable for its 1,400 years of irrational Jew-hatred that relentlessly consumes the Muslim world.

The anti-Semites will not stop until every Jew is driven out or dead. Under these terms, pikuach nefesh’s suggested capitulation may ultimately destroy more lives than it saves.
Steven Scheffer, Burlington, Ont.

Michael Den Tandt paraphrases the Kevin O’Leary philosophy as one in which money provides the best objective measure of true value. So by that logic, to take just one example, a nurse clinician in pediatric oncology has less “true value” than a corporate tax attorney. Give me a break.

Money is certainly useful as an objective metric, but as some keep forgetting, government is not a business. It does not have shareholders and employees, it has citizens with fundamental rights. Wealth management is only one part of its mandate.

The life of Harry Truman usefully illustrates this distinction: he was a good soldier in the First World War, a great statesman and a poor businessman, and he was hardly alone in this. Conversely, the list of self-made millionaires who were either war heroes or great statesmen is very, very short.

While I agree that we could use a counterweight to Prime Minister Justin Trudeau, surely we can at least aspire to a more lofty personage than Canada’s version of Donald Trump.
Pierre Ross, Montreal.

‘Extremists in their midst’

As a Muslim, I am indebted to extremists like Donald Trump — they prove to the world that Muslims are not the only people who have extremists in their midst. Right-wing conservative nut bars, like Trump, show that extremists come in all shapes and sizes. The only thing that is really scary and worrisome is the possibility that a loud-mouth noisemaker like Trump could become commander in chief of the United States. The entire planet would be in real trouble.
Abubakar N. Kasim, Toronto.

‘The insanity of the church’

Ah, the insanity of the church: spending thousands upon thousands of dollars to meet, discuss and attempt to resolve issues that are in their God’s domain, while here on Earth thousands of people, such as the Yazidis, are in need of funds to be rescued from genocidal maniacs. Obviously the Anglican Church’s priorities are ones I will never understand. Far from being momentous, this waste of money and energy is a sad reflection of where religious priorities lie, when true service to mankind is achingly necessary. If I was an Anglican, I would be ashamed.
Gary Rose, Toronto.

It seems to me that Michael Coren has totally missed the point of what the Angelican Communion is debating. It is not a secular issue. It one based on what every church in the world should be basing their respective teachings on: Holy Scripture, i.e., the Bible. Christian marriages must follow to precepts set out in the Bible. No where does the Bible condone same-sex relationships, let alone marriages.

Those who profess to support gay rights do a great disservice to Christianity by ignoring the teachings of Christ and the precepts that God gave us. Those who defend marriage in its traditional manner do so because they are adhering to the Gospel. They are not being anti-gay; they are simply being pro-faith.

No one who believes in traditional marriage is by any means advocating discriminating against homosexuals. Gay people certainly have the right to equal jobs, housing and so forth.
Regina Silva Robinson, Toronto.

Parti Québécois Leader Pierre Karl Péladeau’s Quebec Institute of Applied Research on Independence is a transparent attempt to con Quebecers and will likely end up hiring the usual procession of biased separatist hacks and “experts” to produce the misleading bait the separatists require for their lobster traps. This new think tank will conveniently omit to calculate the money the province would lose when businesses and people being moving to the RoC, and will omit to publish any facts and findings that don’t support sovereignty.

The PQ has a history of spending taxpayers’ money to hoodwink them. Prior to the 1995 referendum, it mailed a glossy brochure to every Quebec household that was full of misleading information about the benefits of sovereignty. This is more of the same. Creating this think tank would likely contravene Quebec’s Election Spending Act and should be stopped by the Quebec director of elections before the propaganda starts to flow. MPéladeau is head of a political party and his personal financing of this institute appears to be a blatant attempt to circumvent election-spending laws. PKP’s refusal to sell his media machine and this latest vile affront to democracy both demonstrate this man’s lack of respect for democratic rules and the danger he poses to Canada.
Alan Mew, Baie d’Urfe, Que.