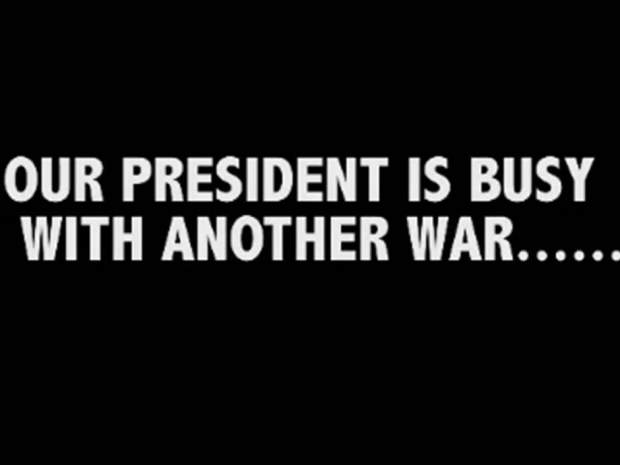 A not-so-long-time ago, in a country pretty close by, a Republican presidential nominee hopeful took aim at the highest grossing blockbuster of all time.

Donald Trump has released a new video through Instagram criticizing U.S. President Barack Obama for cutting off a December press conference by saying, “OK everybody, I’ve got to get to Star Wars.”

The spot begins with ominous music worthy of the Dark Side and white script on a black screen: “We are in a serious war.”

Scary headlines about ISIL and recent attacks in Paris, France, and San Bernardino, California, precede the assertion that “our president is busy with another war.” Then we see Obama waving off reporters with a grin and the note that he’s off to see the Force Awakens, the seventh Star Wars movie, which was released the day of the press conference.At the time, American media criticized the president for leaving early.

First Lady Michelle Obama was hosting the screening for members of the military and their families, and Obama, as commander-in-chief, and potentially closeted nerd, was off to join them. Special guest R2D2 even made an official visit to the White House.

The Dark Side was also out in force, with a couple of Storm Troopers flanking Obama’s press secretary after he took over the podium from the president.

Now, while we know Trump is no fan of immigration, his stance on interplanetary visitors remains unclear. What’s is crystal, however, is that he believes Obama was focusing on the wrong war and, as the ad states, it is “time for a leader with real priorities” so he can “make America great again.”

The latest Star Wars flick has not only shattered box office records around the world, but it’s probably the most popular thing America has contributed to the world stage since Obama himself was elected. And, who knows, maybe his new Star Wars knowledge will help the president on certain foreign policy files. At least he’ll have something to talk about with Prime Minister Justin Trudeau when he visits in March that’s not Canada’s convoluted stance on the battle against ISIL or America’s rejection of the Keystone XL pipeline.

Trump has never shied from criticizing Obama. Even before he entered the race for the Republican nomination for the 2016 presidential campaign, he funded a campaign asserting the president is a secret Muslim and tried to force him to produce a long-form birth certificate to prove he was born in the United States — a legal requirement for holding the presidency. Since them, Trump’s colourful campaign has called Obama everything from a liar to inept.

Trump has not been consistent in his anti-Star Wars views, however.

On May 4 — a day celebrated by Star Wars fans because “May the Fourth” kind of sounds like “May the Force be with you” — Trump shared a Facebook post under the hashtag #MayTheFourthBeWithYou. That missive links to a video promotion from& Trump’s former reality show The Apprentice. In it, The Donald teams up with Darth Vader, creates a Trump-branded Death Star, relishes using the Force to strangle Storm Troopers, and says the Dark Side “really blew it” by letting some kid from Tatooine foil their plans.

Because nothing says presidential material than suggesting the Dark Side and Darth Vader weren’t evil enough.

Is Marco Rubio surging in Iowa? Here’s what to watch for.