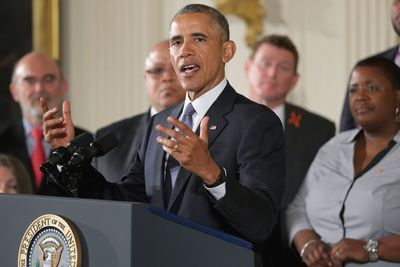 There seems to be a big source of confusion coming out of President Barack Obama’s executive actions on guns: Is Obama really closing the infamous “gun show loophole”?

The short version: No.

The long version: For one, the “gun show loophole” is a terrible name. The better way to look at it is a private sales loophole: If someone purchases a gun from a private seller, such as a collector, friend, or family member, no gun background check is required. This is well-known as the “gun show loophole” because these types of private sellers can be found at gun shows. But licensed dealers at gun shows still have to carry out background checks. The actual loophole is that someone can meet with a private seller at a gun show — or, increasingly, over the internet — and buy a firearm from that person without a background check. In other words, the gun show doesn’t create a loophole; the private sale does.

Obama’s executive actions do not close this loophole. Instead, the president issued a guidance that attempts to narrow the loophole by limiting who can sell guns without a federal license (which requires background checks on sales), and warns gun sellers of the risks if they try to use the private sales loophole to avoid carrying out a background check. White House officials said their primary interest is to go after for-profit dealers who are posing as hobbyists or one-time sellers when they are in fact “engaged in the business” of selling guns.

The idea is, essentially, to make enforcement of existing federal laws stricter so fewer people — whether gun sellers or buyers — take advantage of the loophole. So a better way to look at the move is that it’s narrowing, rather than closing, the loophole.

In fact, Obama’s executive actions can’t completely close this loophole. It’s written into law, so it would take congressional action to completely close it. (The White House was clear on this point in a call with reporters, stating multiple times that the executive actions should not let Congress “off the hook” of passing gun control legislation.)

So Obama is taking some steps to narrow the gaps in federal law, and it’s certainly the biggest action he’s taken yet on guns. But that mostly reflects his inability to do much on guns without Congress, not that these tweaks will add up to enormous changes.

Britain pays EU '£1BILLION EACH MONTH': Yet another reason we should quit the eurozone

Why do the Iowa caucuses matter? Because everyone thinks they do.