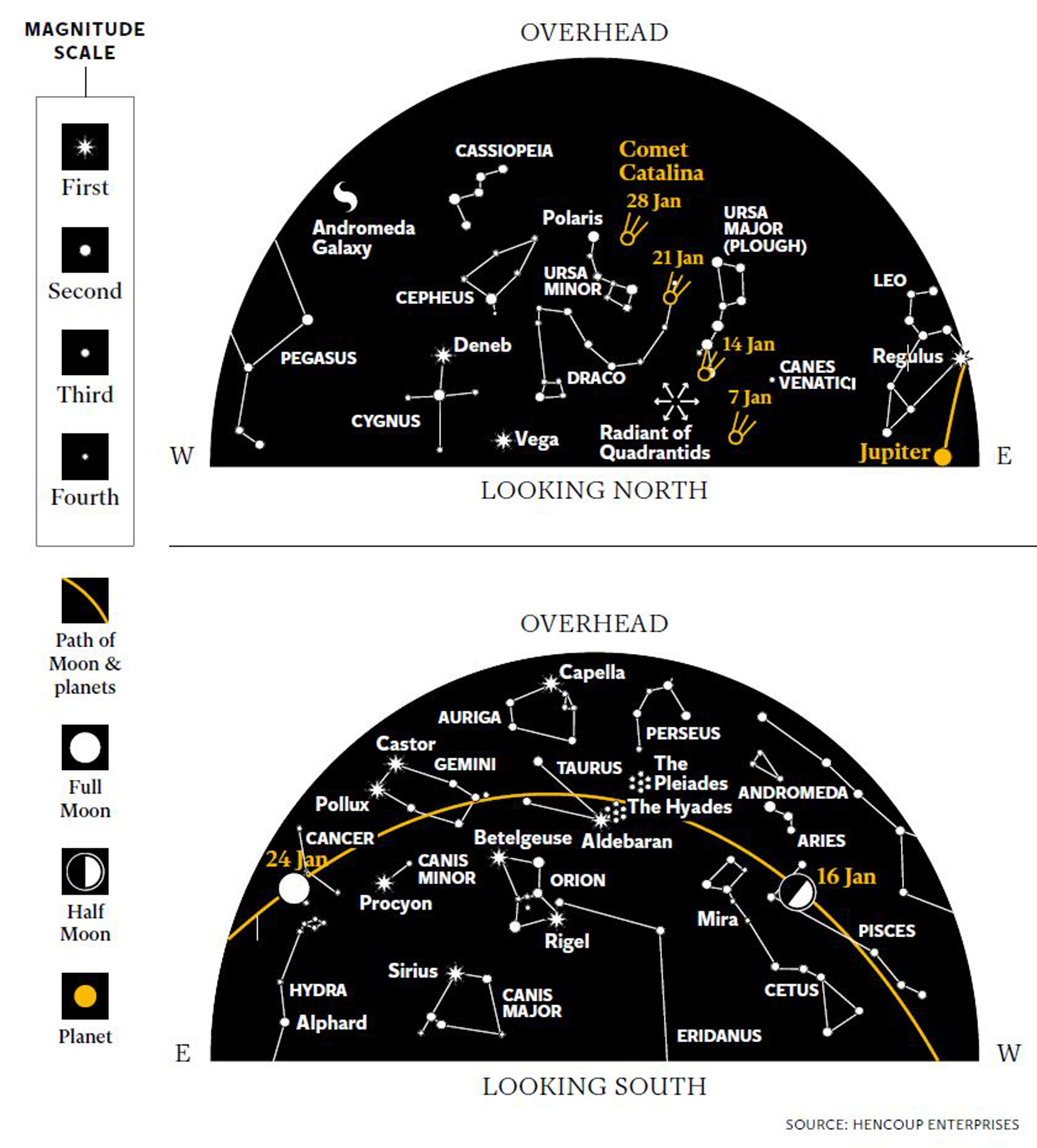 Sirius – low in the south – is lording it over the night skies this month. It’s the brightest star in the sky, but it’s not particularly luminous. Sirius just happens to lie nearby on the cosmic scale. Just 8.6 light years away, it’s only twice as distant as our nearest neighbours, the Alpha Centauri trio in the southern hemisphere.

Popularly known as the Dog Star, its name derives from the ancient Greek Seirios, which means “scorcher”. The dog connection also comes from the Greeks: when Sirius rose with the Sun in late summer, it heralded the hot and humid dog days’ when everything slowed down, and dogs were believed to suffer and become lethargic from its appearance. And it’s not just dogs. In Homer’s Iliad, he wrote:

Sirius rises late in the dark liquid sky
On summer nights, star of stars
Orion’s Dog, they call it brightest
Of all, but an evil portent, bringing heat
And fevers to suffering humanity.

The Egyptians noticed this too: but to them it was good news. The annual “heliacal risings” of Sirius (when it rose just before the Sun) were a sign that the Nile was about to flood – a good harbinger for a bumper harvest.

Sirius is the brightest star in Canis Major, one of Orion’s two hunting dogs – helping him to fight his adversary, Taurus the Bull. It boasts a temperature of about 10,000C and is around twice as heavy as the Sun. And it is a relatively young star: just 230 million years old, compared with the Sun’s venerable 5,500 million years.

In 1844, the astronomer Friedrich Bessel noticed that Sirius was being “pulled out of place” by a companion star. His telescopes weren’t powerful enough to show it: the discovery would have to wait until 1862 when American astronomer Alvan Clark was testing his new telescope, then the most powerful in the United States.

The puny little companion was nicknamed the Pup – but this had once been a star much more massive than Sirius. The same weight as the Sun, and yet the size of the Earth, the Pup is a white dwarf: a dying nuclear reactor from the centre of a star that has puffed off its atmosphere. And its gravity has considerable powers.

Ten thousand times fainter than Sirius, the Pup has a searing surface temperature of around 25,000C. But for this small star, it’s the end of the road. With no nuclear reactions to keep it alive, the Pup will cool to become a dead, black globe. Just wait two billion years…

Comet Catalina – a celestial wanderer that zoomed around the Sun in November – graced our mornings last month, and in January it’s moving into the evening skies. That’s the good news; the bad news is that the comet is less than half as bright as astronomers had hoped. We’ve marked its path on the chart: unless you’ve got really dark skies you probably won’t see it with the naked eye, but you’ll pick it up easily in binoculars or a small telescope.

But we’re in for some cometary sparks during the first week of January, as specks of dust from the defunct comet 2003EH1 slam into the Earth’s atmosphere and burn up in a shower of meteors. These shooting stars stream outwards from a point near the “tail” of the Great Bear: they are called the Quadrantids.

We have a wonderful starry tableau this month, featuring the bright winter constellations Orion (the hunter) and his two dogs (Canis Major and Canis Minor), along with Gemini (the twins) and Auriga (the charioteer). To the right, you’ll find the celestial bull, Taurus: on the night of 19/20 January, the Moon moves right in front of the Hyades, the star cluster that makes up the bull’s head of Taurus, and also – in the early hours – hides the red giant star Aldebaran.

Later in the evening, look out for brilliant Jupiter rising in the east. It’s followed by the red planet: Mars rises about 2 am. And the pre-dawn skies are dominated by glorious Venus, hanging in the sky like a tiny lantern paving the way for the rising Sun. On the morning of 9 January, it passes extraordinarily close to fainter Saturn – a splendid sight through a small telescope.

What to look for

How to predict the future better than anyone else