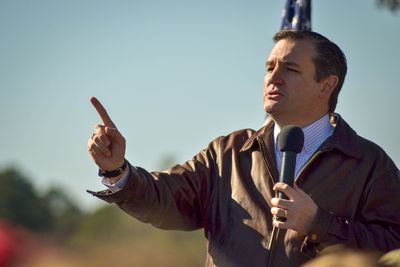 Republican presidential candidate Ted Cruz has a message for the armed militia members occupying a federal building in Oregon: Stand down.

“Every one of us has a constitutional right to protest, to speak our minds,” Cruz said, according to NBC News. “But we don’t have a constitutional right to use force and violence and to threaten force and violence against others. So it is our hope that the protesters there will stand down peaceably, that there will not be a violent confrontation.”

Presidential candidates might be expected to oppose most violent confrontations. But Cruz’s statement is noteworthy because he strongly supports one of the animating ideas behind the Oregon protest — that the federal government owns too much land in the western United States and should transfer control of that land to states.

In 2014, Cruz initially seemed supportive of the armed standoff on the Bundy Ranch in Nevada, a confrontation that militia experts say led directly to the standoff in Oregon, saying rancher Cliven Bundy’s decision to take up arms was the “tragic culmination of the path that President Obama has set the federal government on.” (Cruz later withdrew his support after Bundy’s racist remarks came to light.)

Cruz is one of the candidates who might seem most ideologically sympathetic to the protesters’ aims. If he’s refusing to support them, it’s unlikely that the Oregon confrontation will become a cause célèbre among conservatives the way the Bundy Ranch standoff did.