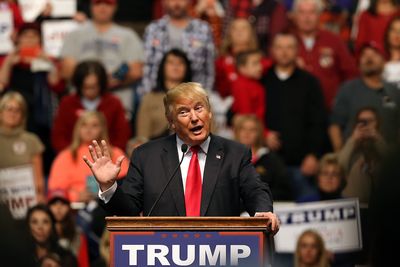 Hundreds of thousands of citizens of the United Kingdom aren’t pleased with presidential frontrunner Donald Trump’s proposal to ban Muslims “until we can figure out what’s going on.”

They’re so displeased, in fact, that they started circulating a petition to ban his entry into the UK. The petition accuses Trump of having perpetuated “hate speech,” and implores, “If the United Kingdom is to continue applying the ‘unacceptable behaviour’ criteria to those who wish to enter its borders, it must be fairly applied to the rich as well as poor, and the weak as well as powerful.”

When the petition first appeared, Trump immediately condemned it as a scapegoat for the country’s “massive Muslim problem.” In 2011, more than 2.7 million Muslims lived in the UK, comprising about 4.5 percent of the nation’s total population. In the US, Muslims made up about 0.9 percent of the population in 2010.

British citizens didn’t agree. So far, the petition has amassed more than 568,000 signatures, far surpassing the 500,000 required to trigger a debate in Parliament.

British officials provided an initial response, saying in a statement that while they would not formally ban the real estate mogul, they reserved the right to do so. “The Home Secretary may exclude a non-European Economic Area national from the U.K. if she considers their presence in the U.K. to be non-conducive to the public good,” said the UK’s home secretary, Theresa May, in a statement.

And in direct response to the petition, the House of Commons has scheduled a debate – albeit in an overflow room – to consider the ban.

Debates of this nature are largely symbolic and rarely change government policy, according to BuzzFeed.

Even so, the debate marks a first in recent memory that one of America’s closest allies has seriously considered cutting ties with a potential future president.