Home
Politics
The UN library announced its most-checked-out book of 2015. It's kind of disturbing. 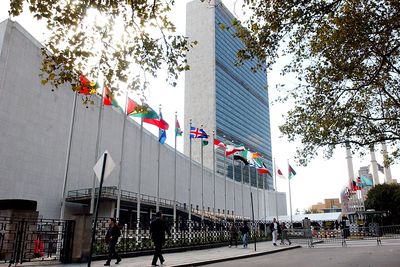 The Dag Hammarskjöld Library at the United Nations — named after the secretary general who died in 1961 — doesn’t make the news very often. Meant to be used by the professional Secretariat staff of the UN and by national delegations, it stores documents and publications from the UN and related organizations, as well as a raft of other books and materials on international relations, law, economics, and other UN-relevant topics. So, you know, a library.

But even the UN’s library has a social media presence now, and recently it tweeted the publication that got checked out the most frequently in 2015:

To be clear: The UN is full of delegates representing awful dictatorships, and the book that got checked out the most from the UN library was about … how to be immune from war crimes prosecution. That does not seem like a good thing!

The book in question isn’t a UN document — it’s a doctoral thesis from the University of Lucerne by Ramona Pedretti, pursuing the question of when heads of state and other government officials can be charged in foreign courts. Generally, she explains, there are two forms of immunity in international law from which heads of state can benefit.

She concludes that immunity ratione personae is absolute, and thus that domestic courts in one country can’t indict the sitting leader of another nation, whereas ratione materiae can be invalidated for defendants who’ve left office — as happened with the arrests of the Nazi fugitive Adolf Eichmann by Israel and Chilean dictator Augusto Pinochet by Spain. Basically, Pedretti is arguing that incumbent heads of state can’t be charged and prosecuted by a foreign court, whereas past heads of state can.

Matters are slightly different for the International Criminal Court, a treaty-based permanent court that has indicted incumbents — notably current Sudanese President Omar al-Bashir in 2009. As Pedretti explains, those cases can still raise ratione personae issues, and the African Union invoked that principle in condemning Bashir’s indictment. The Pre-Trial Chamber of the ICC disagreed, arguing that international courts are generally exempt from ratione personae restrictions, which are only meant to apply to domestic courts in foreign countries (e.g., it means the United States can’t indict, say, Zimbabwean dictator Robert Mugabe in American court).

Pedretti ultimately argues that leaders of countries that ratified the ICC’s underlying treaty, and ones whose cases were referred by the UN Security Council (like Bashir’s), are vulnerable to seeing their ratione personae immunity taken away, but that it goes too far to say that all heads of statement lack immunity before the court.

It’s all very nuanced and interesting stuff, especially if you have reason to think you’ve committed crimes that could land you in the Hague!