Dfg Admin
January 2013 edited January 2013 in Life
I knew the name Aaron, sort of remembered his connection with Reddit, apparently he was the co-founder of Reddit. As I said I didn't knew him and didn't knew about his achievement so it came as a shock to see him sharing the same birth year as me and dead. He has an early start compared to me, our lives run off in different directions but I guess deep down we did share something in common and as wild it seems it makes sense for him to end his life it's just a shame I wasn't there or didn't reach out to him. I do hope people will realize what we lost today and will fight to prevent that in near future. Aaron bro, R.I.P you're a legend. 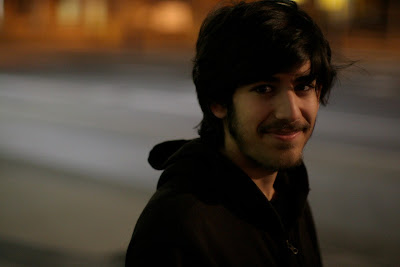 
We at reddit were saddened by the news of Aaron's passing. Here is a statement from his family. Our thoughts and deepest condolences are with his family and loved ones.


Aaron joined reddit in 2006. His friends and family are sharing memories and stories on rememberaaronsw.com.


If you feel so moved, join us in donating to Demand Progress or GiveWell in Aaron's memory so that his work for civil liberties, civil rights, and government reform can continue.


Just to show how awesome he was read this:

There's an old joke among programmers about who will maintain the code when its author gets hit by a truck. This page is here so that if for some reason I'm no longer able to keep my web services running, people will know what to do.
I designate Sean B. Palmer as my virtual executor to organize such things. (And if you delete anything, Sean, I will haunt you from the grave!)
I ask that the contents of all my hard drives be made publicly available from aaronsw.com.
web.resource.orgSean (or someone he designates) should become the new curator/webmaster. Please continue updating the site and mirror list and ensuring the persistence of its URIs. (This means that nothing controvertial or illegal should be included. Save those for cryptome.)Source CodeCopyright for my GPLed source code should revert to the Free Software Foundation. They seem to have a reasonable policy about letting people use the code.WebsitesPlease keep the websites operational where possible, with content written by me kept untouched where appropriate. Appropriate pages (e.g. on aaronsw.com) may contain a notice about what happened with a link to more info. The front page of aaronsw.com should be redone as appropriate with a link to the old page.GraveI'd like to rest someplace that won't kill me. That means access to oxygen (although direct access would probably be bad) and not having to climb through six feet of dirt. For other stuff, email Sean. I'm sure he'll do something reasonable.
If something does happen to me, please update the footer of this page with a link. Also email the relevant lists and set up an autoresponder for my email address to email people who write to me. Feel free to publish things people say about me on the site. These are probably all obvious and I'm sure you'll figure it out.
Oh, and BTW, I'll miss you all.

Official Statement from the family and partner of Aaron Swartz

Our beloved brother, son, friend, and partner Aaron Swartz hanged himself on Friday in his Brooklyn apartment. We are in shock, and have not yet come to terms with his passing.

Aaron’s insatiable curiosity, creativity, and brilliance; his reflexive empathy and capacity for selfless, boundless love; his refusal to accept injustice as inevitable—these gifts made the world, and our lives, far brighter. We’re grateful for our time with him, to those who loved him and stood with him, and to all of those who continue his work for a better world.

Aaron’s commitment to social justice was profound, and defined his life. He was instrumental to the defeat of an Internet censorship bill; he fought for a more democratic, open, and accountable political system; and he helped to create, build, and preserve a dizzying range of scholarly projects that extended the scope and accessibility of human knowledge. He used his prodigious skills as a programmer and technologist not to enrich himself but to make the Internet and the world a fairer, better place. His deeply humane writing touched minds and hearts across generations and continents. He earned the friendship of thousands and the respect and support of millions more.

Aaron’s death is not simply a personal tragedy. It is the product of a criminal justice system rife with intimidation and prosecutorial overreach. Decisions made by officials in the Massachusetts U.S. Attorney’s office and at MIT contributed to his death. The US Attorney’s office pursued an exceptionally harsh array of charges, carrying potentially over 30 years in prison, to punish an alleged crime that had no victims. Meanwhile, unlike JSTOR, MIT refused to stand up for Aaron and its own community’s most cherished principles.

Today, we grieve for the extraordinary and irreplaceable man that we have lost.