Home
Economy
….And Why It Could Happen Again 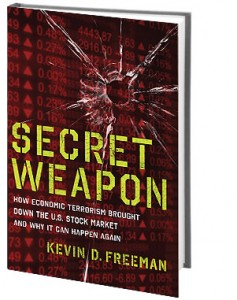 In early January 2009, a group within the Pentagon, tasked with understanding asymmetric warfare contracted me to research and explain the role that Economic Warfare may have played in the stock market crash underway at the time. We had already witnessed how the market crash played a decisive role in the Presidential election. When I was hired, President Bush was about to hand the reigns of power to Senator Obama. He was destined to take America in an entirely new direction.

Our initial work was completed in mid 2009 under the title “Economic Warfare Risks and Responses.” We came to some startling conclusions. There was clear and compelling evidence, later corroborated by multiple sources, that foreign financial terrorists could attack our markets and economy. Further research demonstrated that attacks did, in fact, take place in 2007 and 2008 when we were most vulnerable. Even the Treasury Secretary at the time of the crash admitted as much in a BBC interview years later. There can be no doubt. What was surprising, however, was the Administration’s effort to silence this research as noted by Bill Gertz, perhaps the best defense/intelligence reporter in America. You would have thought that these findings would have provoked a national outcry. Instead, they were purposely kept from the official Financial Crisis Inquiry Commission (FCIC) report to Congress on the “Causes of the Financial and Economic Crisis in the United States.” You might have thought the fact that foreign terrorists were trying to crash our market and economy might warrant a mention, especially if it were understood that their actions ultimately impacted our Presidential election.

After completing that report, and for the next two years, my team and I briefed everyone we could find inside government to warn that unless we eliminated the serious vulnerabilities exposed, the same process could repeat. We went to FBI, DIA, HASC, ONA, DARPA, IARPA, SEC, among others. We briefed a retired CIA Director who remains active in the national security community and a retired National Security Advisor. Those we briefed were in the highest seats of authority and almost universally admitted that we had a problem. It just wasn’t clear who would be responsible to address it and without White House support, it would not be addressed. No single agency was responsible. It wasn’t in their “swimming lanes.” [You can get an idea of some of the people briefed by looking at those who graciously wrote book endorsements here and here.]

Multiple other studies were launched and each came back with validation. Economic warfare was real and foreign actors could crash our stock market and destroy our economy. Eventually, this would be admitted publicly much later by then head of the NSA in a 60-Minutes interview with little notice. It was casually dropped on air with the retirement interview of General Keith Alexander.

Starting in mid 2011, the Press finally recognized the gravity of this story. It began with an article in the Times of London quickly followed by a Bill Gertz article. Then there were appearances with Megyn Kelly and Maria Bartiromo. The real breakout, however happened when Glenn Beck was sent a copy of my original research and read it on the air. This began a flood of media coverage that has spanned the past five years.

In January 2012, Regnery published my book Secret Weapon: How Economic Terrorism Took Down the U.S. Stock Market and Why It Can Happen Again. It is the “Why It Can Happen Again” part that merits consideration right now. From the day it was published until recently, the stock market has proven very resilient. No one has really been concerned about another crash, at least not until recently. In fact, the markets moved rather steadily from the 11,000 level (as measured by the DJIA) to the 18,000 level without much interruption after our research came public. There was a scare in the second half of 2015 but the markets seemed to recover quickly, ending the year flat and with predicted strong prospects for 2016. Unfortunately, the New Year has not cooperated. In fact, the start to 2016 was the worst in history.

There are numerous parallels between what happened in 2008 and what is taking place today. And, while the American banking system may be on sounder footing, the ammunition of central banks to address any problems has already been spent. In some ways, it is like walking the high-wire without a net.

George Soros says there are parallels between 2008 and today.

Here are a few of the parallels we see:

This time, the stresses are in China, Russia, emerging markets, Europe, and oil-producing nations. Regardless, some believe all of this sets the stage for a global crash. It certainly exacerbates problems such as a too strong dollar (and dollar shortage), trade tensions, capital flights, and excessive derivatives. Add to the concern the fact that the U.S. Federal Debt of $19 trillion is almost double the amount it was in 2008, an increase of about $9 trillion.

Worsening the situation is the fact that High Frequency Trading (HFT) is an even larger part of the markets this time around. HFT is based on computerized algorithmic trading without human intervention. We know that the machine traders can be manipulated as was the case when the Syrian Electronic Army took over the AP Twitter feed. We also know that computer algorithms can be compromised as appears to have been the case at Goldman Sachs.

So what happens if Russia decides we are waging economic warfare against them and decides to retaliate? The Security Council Head recently said that we were trying to collapse Russia. They have threatened that they could crash our stock market at will. They have also been caught hacking the NASDAQ and sending spies to find ways to destabilize markets using Exchange Traded Funds (ETFs).

What happens if the Chinese believe we are trying to crash their stock market (as they recently accused us)? Would they retaliate with their own economic weapons as outlined in Unrestricted Warfare? They also believe that George Soros is a tool of U.S. economic warfare policy, label him a financial terrorist, and have recently warned him to not meddle in their markets.

Remember that the official story is that the “Flash Crash” was caused (or at least exacerbated) by a London-based trader. If a lone trader with $40 million could do that much damage, what could a nation state do? The reality is that a House Committee learned that any number of hackers have the capability of taking down America by destroying our stock market. If the machines did cause a market crash, would we ever know for certain whether it was an accident or evil plot?

Has Schäuble overplayed his hand?