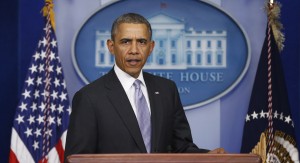 President Barack Obama’s final State of the Union address consisted of a clear vision and an equally plain, if less explicitly identified, path to reach it. Obama envisions a future powered by democratic pluralism, green energy and a redistribution of power from business owners and the wealthy to workers and the middle class.

How will we reach that future? His answer: By crushing the reactionary party obstructing the way.

Workers are angry and flocking to Trump rallies? “That’s why Social Security and Medicare are more important than ever; we shouldn’t weaken them, we should strengthen them.” Need portable benefits in a mobile labor force? “That’s what the Affordable Care Act is all about.”

Obama’s performance wasn’t a speech; it was an indictment. “Anyone claiming that America’s economy is in decline is peddling fiction,” he said. Seated behind him was new speaker of the House Paul Ryan, who in 2012 lamented the “downgraded America” ushered in by Obama and whose serial budget proposals in the president’s first term were premised on an assumption that the nation was in its death throes. As for his “job killing” health care reform, Obama said: “Nearly 18 million have gained coverage so far. Health care inflation has slowed. And our businesses have created jobs every single month since it became law.”

With the exception of a few kind remarks directed at Ryan’s interest in poverty and criminal justice reform, Obama didn’t appeal to Republicans. (He ended that phase of his presidency some time ago, with no noticeable effect on productivity.) He didn’t even shrink from humiliating them. “Sixty years ago, when the Russians beat us into space, we didn’t deny Sputnik was up there,” he said, in an obvious reference to his opponents’ uncanny capacity for denial.

The president didn’t treat Republicans like partners or even adversaries. He treated them like relics of a bygone era, a large, loud, but fading band of obstructionists too wedded to the past and too fearful of the future to factor in the president’s plans. By the time he got around to challenging the chamber to “fix our politics,” it was abundantly clear that he views the wholesale change of the GOP as the opening bid. It was easy, for a time, to forget that Republicans dominate Congress and the majority of statehouses.

When South Carolina Governor Nikki Haley gave the Republican rebuttal to Obama, she seemed to be echoing his themes as often as countering them. “During anxious times,” she said, “it can be tempting to follow the siren call of the angriest voices. We must resist that temptation.”

It’s a generous sentiment. And Haley delivered it more than credibly. But it’s a little late for that now.

Bernie Sanders is right: Drug companies did help cause the opioid epidemic