Gravs are my favorite way to smoke because not only does it hit you fucking hard but it hits you fast too. From what i’ve read gravity bongs are the second best way to get as much THC from weed as possible right behind vaporizers. In this thread i will tell you how to make one of these epic bongs.

What you need:
A bottle (water, gatorade, 2-liter, etc.)
a bowl with a stem or a socket
a bucket that is about the same size as the bottle
a lighter
weed

1. First you want to take the bottle and make a hole in it’s cap. This can be done with a screwdriver or drill or with a pen and some strength. The hole should be about the size of your stem or socket because this is what will hold it in place.

2. Next you will want to take your lighter and burn 4 or 5 little holes at the bottom of the bottle (on the sides, not literally on the bottom). you want them to be about an inch apart and burned all the way around the bottle.

3.Then you want to fill your bucket with water almost to the top of the bucket.

4. To test out if you made your holes big enough, place the bottle into the water right side up and the water should go through the holes in the bottom into the water bottle.

How it should look when you pull it up 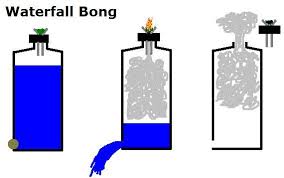 The only reason I watched Jack Reacher

Thinking about Prenups? Well, I suggest you read this!