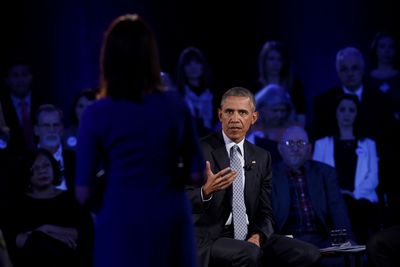 Even as I continue to take every action possible as president, I will also take every action I can as a citizen. I will not campaign for, vote for or support any candidate, even in my own party, who does not support common-sense gun reform. And if the 90 percent of Americans who do support common-sense gun reforms join me, we will elect the leadership we deserve.

It’s a very interesting tactic — making sure that all candidates, even those within his own party, will have to give serious thought to gun control measures if they want the president’s support. And it comes on the same week Obama announced his new executive actions on guns, which could be unilaterally overturned by a future president.

But it’s unclear whom, exactly, this would apply to in 2016. All the major Democratic presidential candidates back more gun control measures, even Bernie Sanders, who has been a moderate on the issue in the past. It’s possible Obama’s threat applies to some lower-ticket candidates, like those running for the House of Representatives or Senate, but it’s unclear if a Democrat maintaining a timid approach to guns would be in a state in which he or she wants the president to campaign.

Besides, Democrats at the state and federal levels seem much more willing to discuss gun control due to the advent of new gun control groups like Everytown for Gun Safety and Americans for Responsible Solutions.

Still, it’s an important statement, suggesting that the future of the Democratic Party is in supporting gun control measures. It’s not exactly a surprising development, but it is interesting to see the party’s effective leader draw the line so clearly.