Home
The Stash
Totseans Humanity Project – Save the Sperm 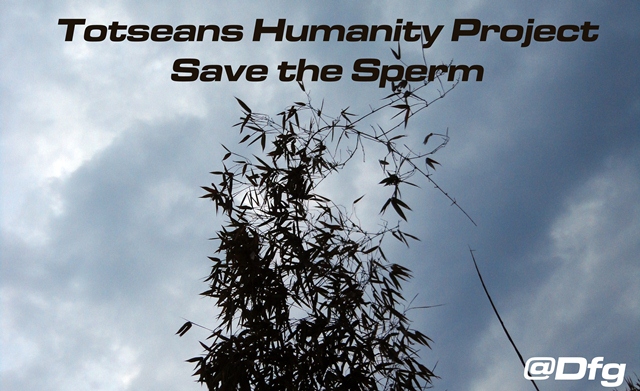 At THP we believe that killing your sperm in this fashion is genocide and should be stopped, each sperm has a right to go through the natural process of evolution which starts at the vagina and ends up in the fetus. Even unwanted sperm have a right. THP is the only known organization that is fighting for the unwanted sperm. We’re committed to providing a save heaven for the victims. With our carefully developed policies, we’re able to save some of the sperm and rehabilitate them until they’re ready for the world again.

Saving a sperm does not mean that we’re proposing that people should have more children, we at THP are strong supporters of THE PILL, but we do want the sperm to have a fighting chance at life or at least they should die with honor.

Another technique is to have containers handy in which the sperm can be deposited and then stored in the cold storage for later use or abuse. The THP support group that helps in generating new ideas proposed that swallowing the semen might be a better alternative; however it still breaks the natural cycle.

Professor TDR has been successfully conducting STS tests on various cats and so far he has been able to save 66% of the semen without any problems, according to him the procedure still needs a lot of work. “Cats aren’t that easy to train but with the user of sophisticated tools and willpower anything can be done.” Prof. TDR will be publishing his report in the Totseans Science Journal which will be published next month.

The fight to save the Semen has just started; everyone should lend a hand or a mouth to safeguard our future, in a world where Celebrity puppies gets more attention than a kid dying of malaria, I think we can spare some resources on saving the semen.

Remember it’s not that hard to make the right choice, you can control the urge and if you try really hard, you can find someone to handle the urge for you.

Signup for our newsletter to get a sneak peak at what’s going on behind the curtains and follow @Dfg for more updates.

How to Use IRC for Book Downloads