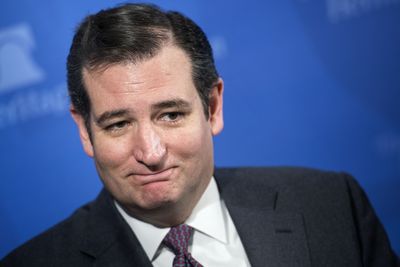 Sen. Ted Cruz, who is currently leading in the polls for the Republican Iowa caucuses, was born in Canada (Calgary, to be exact).

Donald Trump, who is currently second in the polls for the Republican Iowa caucuses, claims to be very concerned about this. He’s fretting that nominating Cruz would mire the GOP in a “precarious” court battle over whether Cruz is actually eligible to serve as president — because the Constitution restricts the presidency to “natural-born citizens” of the United States.

In the past, Trump has flat-out said that Cruz isn’t a natural-born citizen. He’s not saying that explicitly anymore. He’s just claiming that because someone might not believe Cruz is eligible for the presidency, it would be bad for the GOP to nominate him.

But there are people who believe all sorts of things. Some of those things are wrong. It’s pretty clear Cruz can run for president — smart legal minds have looked at the relevant laws and generally agree that an American born in Canada is still eligible to run the country. If famed Obama birther Orly Taitz couldn’t derail the Obama presidency, Cruz’s Canadian birth won’t keep him out of the White House.

Cruz was born a citizen of the United States

Even though Cruz was born in Canada, he was American from the moment of his birth.

Cruz’s mother, Eleanor Darragh, was a US citizen from Delaware. His father, Rafael Cruz, was a Cuban national who had received a green card while living in the US (he eventually became a US citizen in 2005). Under American law, Cruz would be born an American despite having only one US citizen parent as long as that parent — his mother — had physically lived in the United States for at least 10 years and five of those years had been after her 14th birthday. Cruz’s mother easily cleared that bar, so Cruz’s citizenship is not debatable.

Cruz also gained Canadian citizenship at birth, the same way anyone born in the United States is automatically a citizen. Cruz eventually renounced his Canadian citizenship, after he was already in the Senate, to make it clear that America was his only love. But his eligibility to run for president didn’t hinge on that; there’s nothing saying dual citizens don’t count as natural-born.

The question is whether that makes him a “natural-born citizen”

The problem for Cruz is that there’s actually nothing saying what does count as “natural-born.” While it’s common sense to assume anyone who’s born a citizen of the US is a “natural-born” citizen, the law doesn’t officially spell that out. And that’s what creates just a little bit of doubt.

That’s pretty cut-and-dried — and it obviously includes Ted Cruz. Furthermore, the fact that the law was passed so soon after the Constitution was written, by many of the men who had written the Constitution, indicates it’s pretty close to the “founders’ intent” of what a natural-born citizen was. One problem: Congress repealed the 1790 Act in 1795, and replaced it with another law that specified that people in Cruz’s situation would be “citizens” — but not whether they’d be “natural-born citizens.”

Most lawyers agree this would be a pretty thin case against Cruz. On March 11, former Solicitors General Neal Katyal and Paul Clement published an article in the Harvard Law Review that argued that Cruz’s eligibility was an open-and-shut case. “While some constitutional issues are truly difficult,” they wrote, this one isn’t; “the relevant materials clearly indicate” that Cruz counts as natural-born.

The Congressional Research Service doesn’t think it’s quite as obvious as all that; in a 2011 report, CRS concluded that there are “legitimate legal issues” regarding whether people born outside the US count as “natural-born.” But it concluded that “the weight of historical and legal authority” comes down on the side that they do.

Just because the legal question is settled doesn’t mean Cruz’s citizenship won’t get challenged at all. In April 2008, the Senate felt the need to pass a resolution declaring that John McCain was definitely for sure a “natural-born citizen” of the US; the resolution was bipartisan, and both Barack Obama and Hillary Clinton were original co-sponsors.

Meanwhile, a man named John Hollander, who’d voted against McCain in the New Hampshire primary, filed a federal suit against McCain and the Republican National Committee for disenfranchising his vote by running an ineligible candidate for president. Hollander represented himself in court, and doesn’t appear to have made the most impressive argument; the judge dismissed the case that summer because Hollander had no standing to sue.

Maybe if McCain had won the presidency, Hollander might have made another try. That’s what happened to the man who beat McCain: Barack Obama. Birther activist Orly Taitz has been in court through literally the entire Obama presidency trying to press claims that Obama was not in fact born in Hawaii, but rather in Indonesia, and therefore his citizenship is in question. Those lawsuits have not done anything to damage President Obama or the Democratic Party: Some people continue to be convinced that Obama wasn’t born in the US (and Donald Trump winkingly encourages them), but that’s not because Taitz keeps suing over it.

Someone in this country of 300 million Americans will be crazy enough to say Ted Cruz isn’t eligible to run for president, and might even try to take Cruz to court over it. But that doesn’t change the facts. It’s pretty darn clear that Ted Cruz is eligible to run for president. There might be reasons the GOP decides he shouldn’t be its nominee, but his Canadian birth certainly shouldn’t be one of them.

Correction: This article originally said that Cruz’s mother had to have lived in the US for two years “after her 15th birthday” to pass citizenship on to her son. That sentence was based on this USCIS document, but the actual law in question refers to time “after attaining the age of 14 years” — i.e., the 14th birthday. Additionally, the text of the law at the time of Cruz’s birth specified residency of 10 and five years, rather than five and two.