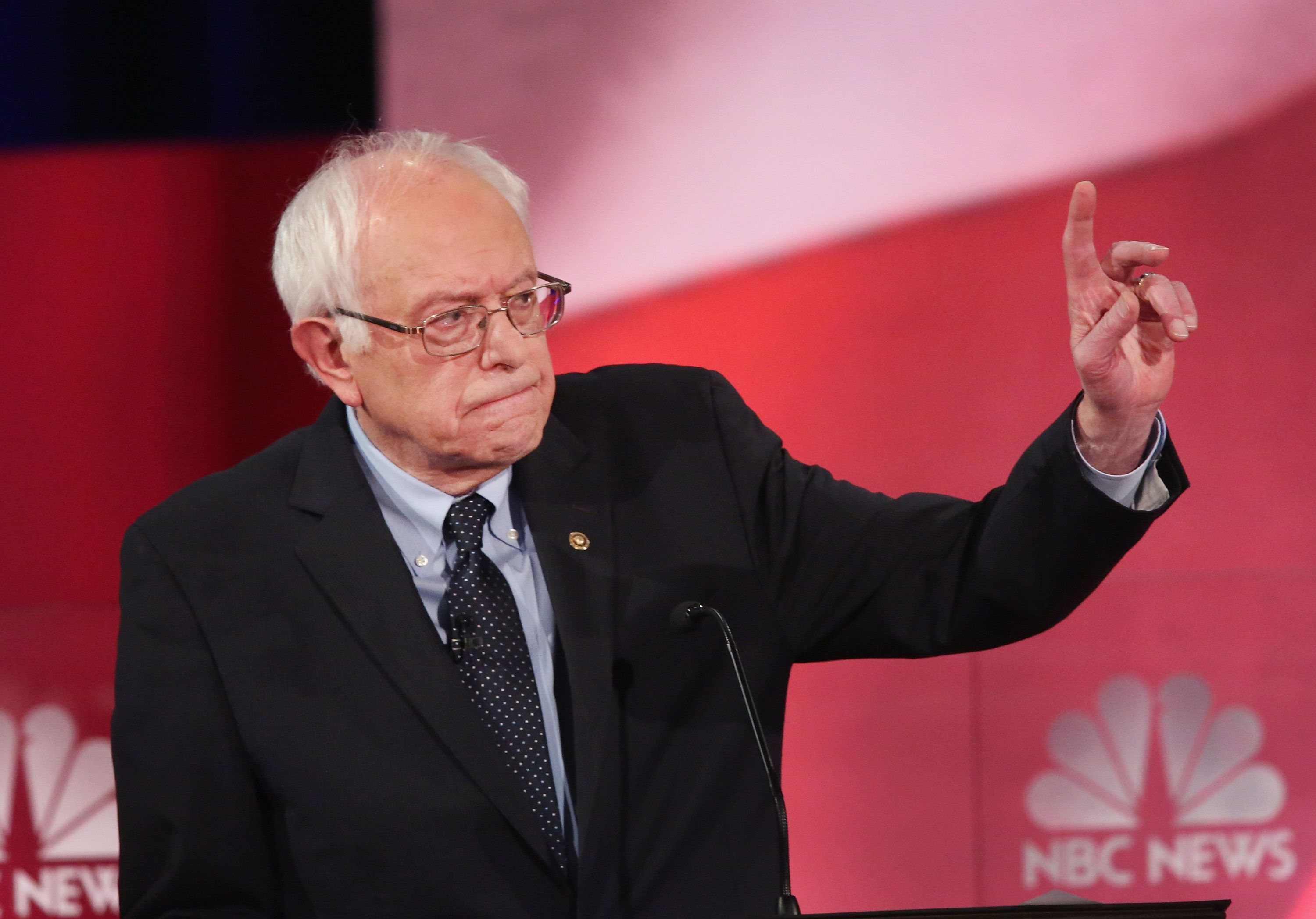 Sunday night’s Democratic debate was, DNC chair Debbie Wasserman Schultz insisted, timed to “maximize the opportunity for voters to see our candidates.” Given that it was held on the Sunday before a federal holiday, that seems … dubious. But whoever wasn’t deterred by the debate’s inauspicious timing saw an event that was both substantive and sort of lackadaisical. Almost all the discussion focused on policy, but Bernie Sanders and Hillary Clinton began awkwardly attempting to slip in attacks on each other, though neither really seemed that comfortable doing it. The most animated of the bunch was Martin O’Malley, who seemed energized by his quest to successfully say something, anything, without being talked over.

It’ll take a few days for poll results to trickle in, which will provide the closest thing to an objective answer of who actually won the debate. But in the meantime, here are the candidates who ended the night better off than they started it — and the ones who slipped.

Bernie is now posting his best poll numbers of the campaign to date, as he excitedly pointed out in a moment that echoed Donald Trump’s matter-of-fact citation of polling at Thursday’s Republican debate. He’s only four points behind in Iowa and gaining, solidly ahead in New Hampshire, and has momentum nationally too. There’s a very real possibility that he wins the first two primary contests and leaves Clinton scrambling to recover in South Carolina.

What he needed to do Sunday night was maintain that momentum, continue his appeal to liberal base voters, and blunt any attacks that Clinton might be tempted to unleash at him. He accomplished all of that, even if he didn’t give a focused, dominant performance. His release of his single-payer financing details denied Clinton a major attack line, he avoided getting bogged down in guns (clearly his worst issue from the Democratic base’s perspective), and struck an ecumenical tone that made him seem relatively above the fray as Clinton tried out various critiques targeting him.

Perhaps his strongest moment was when he erupted at Andrea Mitchell after being asked about Bill Clinton’s affairs:

Andrea Mitchell: Senator Sanders, let me ask you a question, you called Bill Clinton’s past transgressions, quote, totally, totally, totally disgraceful, and unacceptable. Senator, do you regret saying that?

Bernie Sanders: I was asked a question — you know one of the things, Andrea, that question annoys me. I cannot walk down the street, Secretary Clinton knows that, without being told how much I have to attack Secretary Clinton. To get me on the front page of the paper, I have to make a vicious attack. I have avoided doing that. I’m trying to run an issue-oriented campaign. [Applause] I was asked a question…

Andrea Mitchell: You didn’t have to answer it that way though, why did you?

Bernie Sanders: Then if I don’t, there’s another front page. Yes, and I mean this seriously, we’ve been through this. Yes, his behavior was deplorable, have I said a word? No, I have not. I’m going to debate secretary Clinton, Governor O’Malley on the issues facing the American people, not Bill Clinton’s personal behavior.

This appeals to older Democratic still pissed at the media’s preoccupation with Bill’s sexual misconduct while still reminding people of it and condemning it as “deplorable.” It makes him seem above such frivolity, and interested in waging a positive, issue-oriented campaign. Best of all, Clinton didn’t get a chance to respond, even though her campaign attacked Sanders this week for appearing to go negative in one TV spot. After a debate when she clearly went negative at Sanders — and a week in which a notable surrogate attacked him not on the issues but for his age — this made Clinton seem threatened by Sanders and desperate to attack him, as he brushed the attacks off and pivoted to the issues.

Oh yeah, and this is the first debate in which Bernie got the most speaking time of any candidate, beating Clinton by two and a half minutes:

It was only eight years ago that Hillary Clinton was repeatedly attacking Barack Obama as a dangerously inexperienced naif who would be unable to get anything of consequence done as president. Now, she presents herself as a defender of his sundry accomplishments, and attacks Sanders for being insufficiently supportive of the president.

“The fact is, we have the Affordable Care Act,” Clinton declared. “That is one of the greatest accomplishments of President Obama, of the Democratic party, and of our country, and we have already seen 19 million Americans get insurance.” She also cited Sanders’s past criticisms of the president and flirtation with supporting a primary challenge against him in 2011/2012:

Clinton’s message is clear: I am the true defender of Obama’s legacy, I will preserve his gains, while Sanders dismissed them.

Sanders replied not by defending his past critiques of Obama, but by distancing himself from them and insisting he’s a huge fan of the president: “In 2006 when I ran for the Senate, Senator Barack Obama was kind enough to campaign for me. 2008, I did my best to see that he was elected, and in 2012, I worked as hard as I could to see that he was reelected. He and I are friends, we’ve worked together, we have differences of opinion.” As for Clinton’s claims that he would threaten the Affordable Care Act, he rebutted, “We’re not going to tear up the Affordable Care Act. I helped write it.” Sanders isn’t disavowing Obama’s legacy at all: He’s embracing it, and selling himself as the natural person to build on it.

O’Malley made the same point in his introduction, declaring, “We need to come together as a people and build on the good things that President Obama has done.”

The Democratic primary, then, is a competition among three people all of whom embrace Obama’s legacy, celebrate it as a huge success, and differ only on the matter of who’s best equipped to defend and expand his accomplishments. No matter who wins, that this is the debate goes to show just how beloved Obama remains within the Democratic Party, and how he and his presidency will continue to define the party’s mission for years after he’s left office.

Sanders’s spat with Mitchell aside, the moderating Sunday night was about as strong as it’s been at any debate for either party this entire cycle. Mitchell and Lester Holt held the line against candidates talking over each other and speaking past their time limits, and Holt especially was willing to ask follow-up questions when candidates were evasive. When Sanders avoided a question about why he flip-flopped about lawsuit immunity for gun companies, Holt pressed him: “Senator, you didn’t answer the question that you did change your position on immunity for gun manufacturers. Can you answer the question as to why?”

Similarly, when Sanders positioned himself as tougher on Wall Street than Clinton, Holt didn’t just ask Clinton to reply, he framed the reply to ensure it was more useful to viewers: “Secretary Clinton, help the voter understand the daylight between the two of you here.”

Most importantly, almost all of their questions were substantive, policy-oriented, and designed to not be answerable simply by reference to candidates’ past statements. Sanders may have largely dodged Mitchell’s question about how he accounts for the failure of single-payer in Vermont — despite Mitchell’s great efforts to force him to answer it — but it was a perfect angle: It doesn’t get Sanders to regurgitate his stump speech, but forces him to engage with the actual implementation challenges his Medicare-for-All proposal faces.

Holt and Mitchell served as a reminder of what engaged moderating, meant to inform viewers rather than provoke conflict or appease campaigns through lax timing rules, looks like. Future moderators would do well to follow the example they set.

At the risk of sounding tautological, Clinton lost by not winning. The trends aren’t in her favor at the moment. Sanders is gaining in Iowa and is starting to be treated like a serious candidate by the press. Her attempts to attack Sanders’s support for single-payer health care this week were widely perceived as backfiring, especially among liberal primary voters who might be tempted to support Clinton out of practicality. She needed to a debate in which she could show that Sanders was out of his depth, not someone you could plausibly see actually functioning as president. She didn’t do that this time around.

Instead, she had a debate where you tried to throw everything she could at him to see what stuck. She tried the single-payer attack, but given that Bernie released his plan before the debate, it sounded more convoluted than effective: “I have to say I’m not sure whether we’re talking about the plan you just introduced tonight, or we’re talking about the plan you introduced nine times in the Congress.” Ouch?

She tried attacking Sanders as insufficiently pro-Obama, largely for reasons related to Wall Street reform, which generally didn’t sound that persuasive. Hearing that Obama took Wall Street money isn’t likely to make primary voters think, “Hmm, a guy I like took money from bankers, clearly I should vote for Hillary Clinton who also takes money from bankers.” It just raises the visibility of the fact that Hillary Clinton gets finance money and Sanders doesn’t — which, on the margins, is going to bring a lot more people to Sanders’s column than Clinton’s.

Her gun attack was pointed and strong, raising all of Sanders’s key failings in quick succession:

He voted against the Brady Bill five times. He voted for what we call the Charleston Loophole. He voted for immunity from gunmakers and sellers, which the NRA said “was the most important piece of gun legislation in 20 years. ”

He voted to let guns go onto the Amtrak, guns go into National Parks. He voted against doing research to figure out how we can save lives. Let’s not forget what this is about, 90 people a day die from gun violence in our country. That’s 33,000 people a year.

It was probably the best hit she got against Sanders in the whole debate.

Poor guy. The former Maryland governor began his remarks with, “My name is Martin O’Malley” — a cringe-worthy reminder that many primary voters don’t even know who he is or that he’s running for president. And he didn’t get a lot of opportunities to change that situation throughout the evening. Take a look at the speaking time chart again: 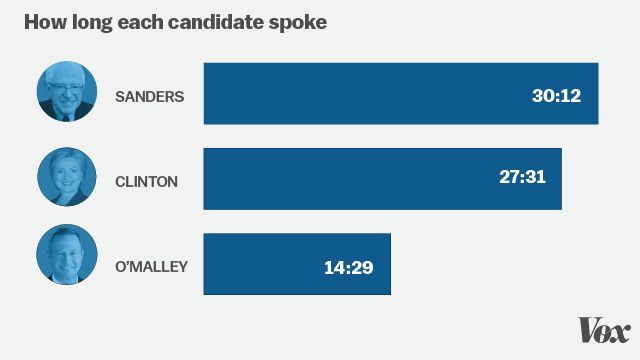 Even O’Malley’s protests that he wasn’t being heard wound up getting ignored:

Lester Holt: We’re going to get into all that coming up.

Martin O’Malley: Just 10 seconds. All of the things…

Lester Holt: … and when we come back, the anger brewing in America.

Martin O’Malley literally asked for the ability to speak for 10 seconds and Lester Holt answered him, “No.”

By then end of the debate, you could see sheer shock and gratitude on his face when it came to closing statements. “Before we leave, is there anything you wanted to say tonight that you haven’t gotten a chance to say? And we’ll start with Gov. O’Malley,” Holt said. “Didn’t see that coming, did you?”

There’s actually a strong case for O’Malley over Sanders and Clinton, as a hyper-competent governor with solid liberal credentials and a record of accomplishment. That’s not a case that O’Malley was able to present Sunday night.