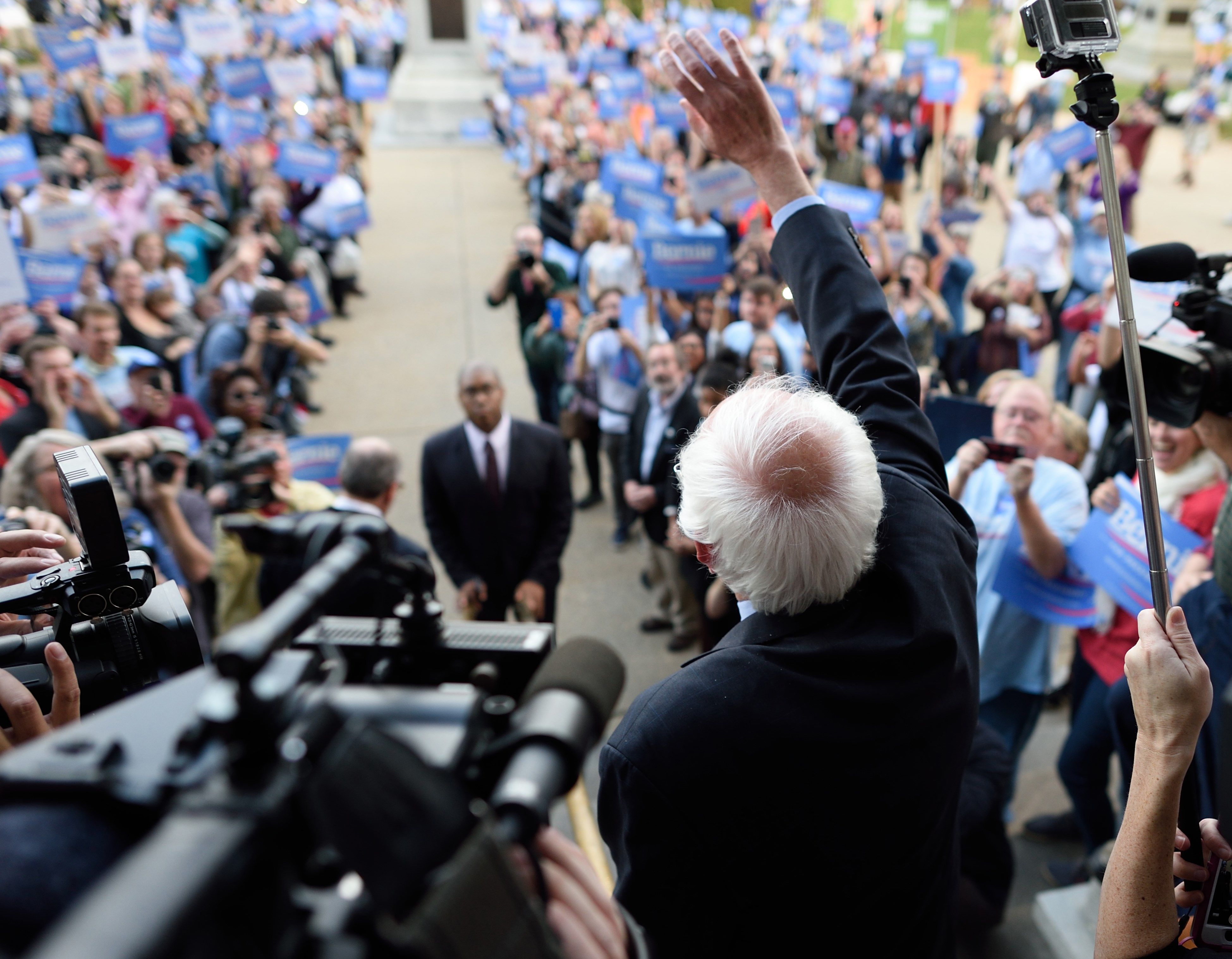 The central premise of Bernie Sanders’s presidential bid is that he’ll spark a “political revolution” in America.

“Today,” Sanders said as he announced his campaign last May, “we begin a political revolution to transform our country economically, politically, socially and environmentally.”

And what, exactly, does he mean by that?

On its surface, the concept is simple: Sanders wants to organize and mobilize the people against the powerful — specifically, corporations and the wealthy. He argues that by building a movement among average Americans, he’ll be able to win elections, defeat special interests, push liberal reforms into law, and build an economy that works for everyone.

But when you drill down into the details, Sanders’s hoped-for political revolution is more complicated than that — and more interesting.

For one, it’s a contested theory about the best way to advance progressive policies. For another, it’s an electoral argument about how the Democratic Party can expand its appeal among white voters and change the existing partisan math. It’s a case that the system is so broken and corrupt that extreme measures are needed to shake it up. And it’s a usually implicit, sometimes explicit critique of President Obama and his party.

But perhaps most importantly and controversially of all, it’s a bet — a bet that the establishment’s conventional wisdom is wrong, and that a silent majority in America can be convinced to support the policies of Bernie Sanders.

To the casual listener, Sanders’s political revolution might at first sound as vague as Barack Obama’s 2008 promises to change the way politics works. You rally the American people to your side, you run against the system, you win the presidential election, and then the country heads off to its bright new progressive future.

But I’ve covered Sanders for a while, and in my view he is selling something different. In contrast to Obama, who tended to position himself personally as the solution to Washington’s problems, Sanders views his political revolution as issues-oriented and coalition-based. In my analysis, it would involve three key planks:

Obama never tried to remake the Democratic Party ideologically, instead staying squarely in its mainstream on economic issues. And he’s been criticized for failing to make use of his massive organizing operation once in office — preferring instead to play an inside game focused on Washington, DC, to get his policies passed.

In many ways, then, Sanders is offering his political revolution as a response to what he perceives as Obama’s failures. “The major political, strategic difference I have with Obama,” Sanders told me when I profiled him in 2014, “is it’s too late to do anything inside the Beltway. You gotta take your case to the American people, mobilize them, and organize them at the grassroots level in a way that we have never done before.”

Indeed, though critics like Slate’s Jamelle Bouie have criticized Sanders’s theory as blind to the realities of partisan polarization in Washington, Sanders argued to me that that polarization is what makes his moonshot plan to change politics so necessary. “The Republican Party right now in Washington is highly disciplined, very, very well-funded, and adheres to more or less the Koch brother position,” he said. “You’re not gonna change them in Washington. The only way that they are changed is by educating, organizing, and what I call a political revolution.”

When discussing how he’ll make his revolution happen, one thing Sanders often talks about is mobilizing people who don’t tend to turn out to vote. “Sixty percent of the American people are not likely to vote in the coming [midterm] election,” he told a crowd in Waterloo, Iowa, back when he was considering whether to run. “You think you can bring around change with that dynamic? You can have the best human being in the world in the White House fighting all the right fights, and he or she will fail.”

But beyond these vague and theoretical nonvoters — whom politicians of all stripes frequently claim they’ll be able to conjure— Sanders has a very specific idea about just which demographic Democrats need to improve among: white people, especially older ones living in rural areas.

Here’s how he put it in 2005, shortly after President George W. Bush’s reelection:

“Why is it that two-thirds of white, rural men voted Republican? Why? That’s what we have to address. That’s crazy. These people are working longer and longer hours. They can’t afford to pay $3.50 for a gallon of gas. They’re losing their jobs. So why do they vote for President Bush? And the Republican Party? We’ve got to address this…

And when I sat down with him in 2014, he made a very similar point:

I do not know how you can concede the white working class to the Republican Party which is working overtime to destroy the working class in America. Of course we’ve gotta work with the African-American community and the Hispanic community and minority communities, absolutely, and I’m proud of my record on all of those issues.

But you can’t concede the white working-class community, which is hurting. You can’t concede the senior community. The idea that Democrats are losing among seniors when you have a major Republican effort to destroy Social Security, Medicare and Medicaid, is literally beyond my comprehension.

To Sanders, this isn’t just a theory — he believes he’s already pulled it off in his home state. He thinks that because he’s made his case on economic issues so loudly, he’s repeatedly won double-digit victories in Vermont: the second-whitest, second-oldest, and second-most-rural state in the nation. He continued:

What I’ve said to people in Vermont is, look, we may disagree on this or that issue — my whole life I’ve been strongly pro-choice, I voted against DOMA when I was in the House, not many of us did. I am pro-gay rights. Not everybody in Vermont shares that perspective.

But what I have made clear, I think, over the years, is that I am pro-working families, I am pro-middle class, I am pro-senior, I am pro-low income. And as the mayor of Burlington, as a Congressman, and as a senator I’ve carried through on those issues.

And I think what people end up saying is that, well, you know, I may disagree with Bernie Sanders on the abortion issue or the gay rights issue, but I know he’s fighting for me and my kids. And I happen to believe that if you are strong on those issues people will give you a little bit of slack on some of the other issues that you may disagree with.

Here we see Sanders’s longtime strategy of prioritizing economic issues while trying to finesse or somewhat downplay his differences with socially conservative voters on other topics. He’s done this, for instance, with guns — after barely winning reelection in 1994, he concluded, as he wrote in his autobiography, that “we lost many working-class men in that election because we handled the gun issue badly,” and would amass a mixed record on gun control votes after that. 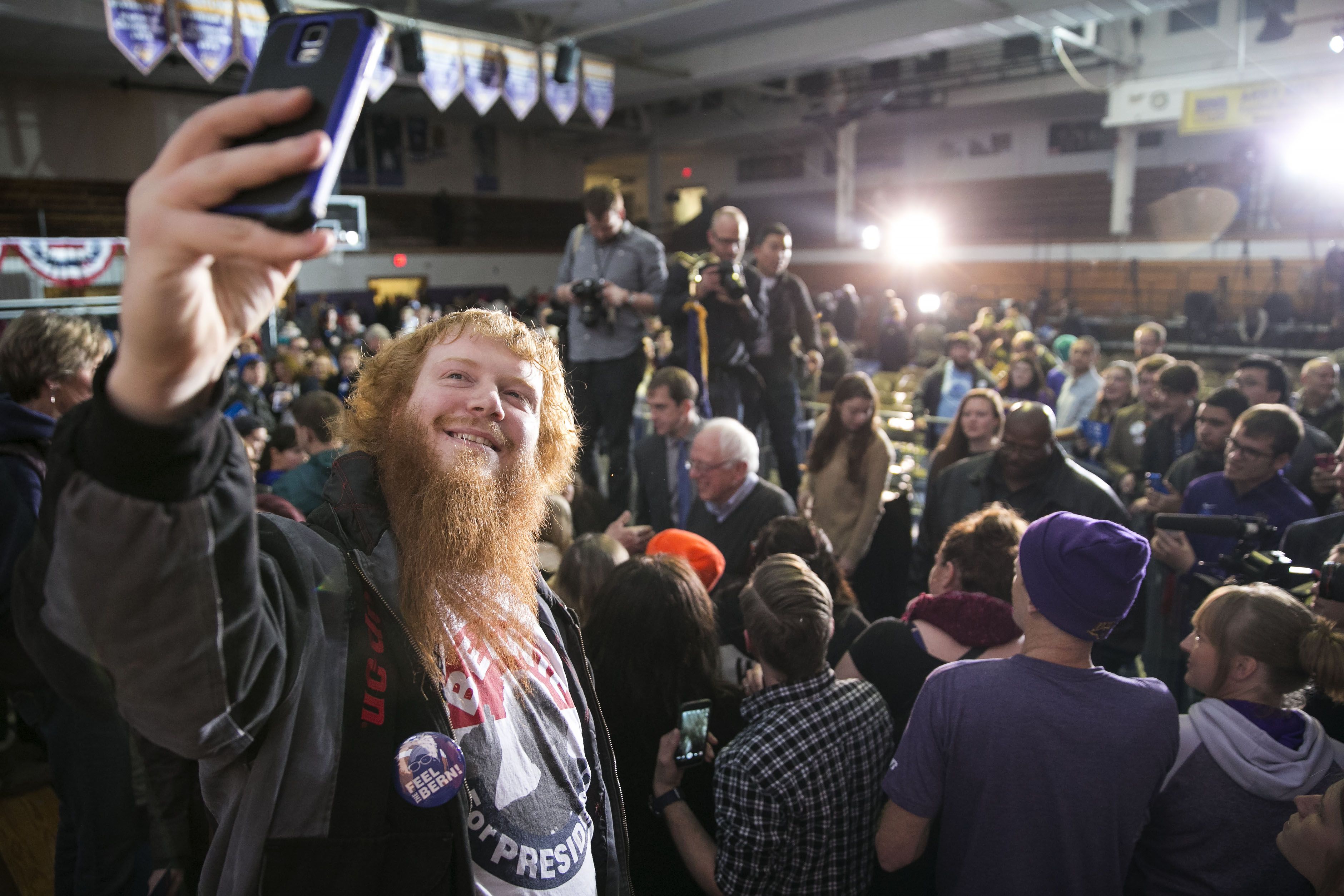 If Sanders truly did bring vast numbers of nonvoters and Republican-supporting whites to his side — and kept them active and mobilized once he was in office — he likely really would change what’s possible in American politics. But can he actually pull this off?

To Sanders’s critics, whose numbers include many mainstream Democrats and liberal commentators, it seems incredibly obvious that there is no revolution brewing in America. Indeed, many of them think Democrats would be lucky to win at all in 2016, and that nominating Sanders would be a very risky move that could hand the levers of power over to the GOP.

These critics argue that Sanders’s revolutionary theory is flawed in several ways.

But Sanders’s most hotly disputed idea is his belief that a silent majority of Americans is out there waiting to be mobilized around his very liberal economic agenda.

In a recent column, the New York Times’s Paul Krugman referred to this as part of a “persistent delusion” common on both the left and right “that a hidden majority of American voters either supports or can be persuaded to support radical policies, if only the right person were to make the case with sufficient fervor.” And Chait mocked Sanders as peddling “a hoary political fantasy: that a more pure candidate can rally the People into a righteous uprising that would unsettle the conventional laws of politics.”

Are Americans waiting for a democratic socialist agenda?

In some sense, Sanders’s argument isn’t particularly new. Twelve years ago, Thomas Frank’s book What’s the Matter With Kansas? argued that the Republican Party appealed to rural, white, low-income voters with social issues — God, guns, and gays — so they’d accept economic policies that go against their own self-interest and benefit the wealthy. Only by moving to the left on economics, Frank believed, could the Democrats win back these downscale whites.

But Frank’s demographic case was rebutted in a 2006 paper by political scientist Larry Bartels. A close look at the data, Bartels argued, showed that low-income whites who lacked college degrees had actually grown more likely to support Democratic presidential candidates in recent decades. Instead, the party had hemorrhaged support among middle- and high-income white voters who lacked college degrees — voters who were concentrated in the South. Are these voters really likely to rally to a democratic socialist’s banner?

I checked in with Bartels this week for his latest thoughts, and he sent me the following chart. It shows how presidential election voters perceived the major candidates’ views on support for government spending and services, relative to those voters’ own views. As you can see, Democrats (in blue) were perceived as far more liberal than what voters said they wanted (in purple), especially in 2012. (The green line shows the average position of whites without college degrees, which hardly differs from the average.)

Sanders and his supporters, of course, would respond by arguing that these voters’ minds can be changed, that with sufficient organizing and education they can persuade these voters that government isn’t the problem, and that they can persuade habitual nonvoters with more sympathetic views to turn out and change this math.

But it’s clear they have a lot of work to do. And if it turns out that the general public does conclude Sanders’s views are far too liberal for them, nominating him would entail a very real risk of a Republican landslide (like idealistic liberals’ nomination of George McGovern in 1972).

Yet many Sanders supporters feel the American political system is so broken, and so skewed toward the wealthy, that backing Sanders’s attempted revolution is a risk worth taking. “It may be a quixotic crusade,” Sanders supporter Ron Yarnell of Johnston, Iowa, acknowledged to me earlier this month. “But we either do this or we become more oligarchic. So I don’t think our democracy has any other choice.”