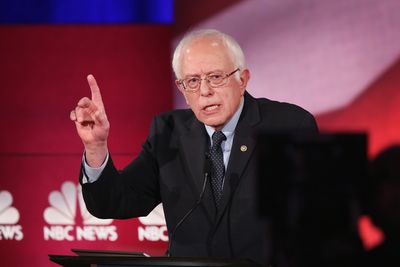 At Sunday’s Democratic debate, Sen. Bernie Sanders (D-VT) made a point about the harrowing opioid painkiller and heroin epidemic that isn’t raised enough: “There is a responsibility on the part of the pharmaceutical industry and the drug companies who are producing all of these drugs and not looking at the consequence of it.”

The opioid epidemic began when doctors prescribed a tremendous amount of opioid painkillers to help treat pain — a serious problem, given that chronic pain alone afflicts about 100 million Americans. One reason doctors were so willing to prescribe these painkillers, despite the clear risks of addiction and overdose, is heavy campaigning from the pharmaceutical industry.

In fact, Purdue Pharma, producer of the opioid OxyContin, paid hundreds of millions of dollars in fines for its false claims about opioids. The Associated Press reported:

Purdue Pharma, its president, top lawyer and former chief medical officer will pay $634.5 million in fines for claiming the drug was less addictive and less subject to abuse than other pain medications, U.S. Attorney John Brownlee said in a news release…

Purdue learned from focus groups with physicians in 1995 that doctors were worried about the abuse potential of OxyContin. The company then gave false information to its sales representatives that the drug had less potential for addiction and abuse than other painkillers, the U.S. attorney said.

In the midst of this misinformation campaign, doctors prescribed hundreds of millions of prescriptions for opioids — in 2012, enough to give a bottle of pills to every adult in the country. And as people became addicted to opioid painkillers, they also began turning to another, cheaper, more potent opioid — heroin — to satiate their cravings.

The result: In 2014, there were a record 47,000 drug overdose deaths in the US, nearly two-thirds of which were opioid-related, according to federal data. The history shows the pharmaceutical industry played a role in those tens of thousands of deaths.