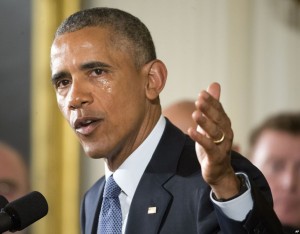 There has probably been more written about U.S. President Barack Obama’s tears during his speech on gun control than about the executive action announced in the speech itself. There’s a good reason for that. Obama has been forced to give this same speech over and over again throughout his presidency. Against that same blue backdrop, we have watched his words transform from eulogies, to a call for action and now finally to tears.

Last Tuesday, after invoking, once again, the first graders who lost their lives at Sandy Hook Elementary, he faltered, repeated the words “first grade,” then paused to wipe his eyes and, for just a moment, fell silent.

During the speech, and really anytime I hear President Obama speak, I think of Zadie Smith’s brilliant essay “Speaking in Tongues,” which appeared in the New York Review of Books in 2009. The essay was based on a lecture she had given at the New York Public Library in December 2008, which subsequently appeared in the author’s collection of essays titled, Changing My Mind.

The essay is about people who have been blessed and cursed with a double-voice; those whose heritage, culture, language and literal speech can’t help but be plural instead of singular, because of their various influences. Her first examples, herself and Eliza Doolittle — the fictional character from the play Pygmalion (and the musical version, My Fair Lady) — have undergone a transformation and swapped one voice for another.

In Smith’s case, her Cambridge education and later career in the literary fishbowl eventually replaced the working-class Willesden, England, voice of her childhood with a new one — like the flower girl who is sacrificed to make a lady. But then Smith moves on to the then president-elect of the United States, whose voices, she theorizes, are of an altogether different order: “The tale he tells is all about addition. His is the story of a genuinely many-voiced man.”

Obama has managed to go through life expanding his speech, like adding songs to a repertoire. His more-than-singular voice begins with being biracial, as does Smith’s, the most obvious example of living a synthesis where others might see two distinct characteristics. But race is only one of the innumerable factors that make up the DNA of our voices — including class, education, political affiliations, religion, sexual orientation and citizenship — and one man clearly can’t lay claim to them all.

Smith’s many-voiced man only speaks in all of these tongues by way of translation from an underlying universal language he has faith we all really speak. It’s the skill of interpretation, not imitation — taking words like hope, despair or freedom and sending them across different frequencies to different people. Smith is addressing that internal kind of language barrier, a thing so solid we don’t even know it’s under our feet, until someone comes along and walks across it like water.

In the same week, after his speech following the horrific events in a Charleston, S.C., church, the president went on Marc Maron’s podcast, WTF, where he again discussed his frustration over gun control. Both performances were equally frank and honest, yet undeniably calibrated for their intended audiences. Only it didn’t sound as if he put on a false voice for one or the other — it’s an uncanny ability that makes it seem as if he’s performing some kind of magic trick, like the illusion of physically being in two places at once.

Against that same blue backdrop, we have watched his words transform from eulogies, to a call for action and now finally to tears.

You can immediately see why this prowess of voice can be as sinister as it is winning. Obama is accused of being double-faced, an impostor and — the worst of all political sins, the one Smith singles out in her essay — of being an equivocator. But whether this central characteristic of Obama’s makes you a supporter or detractor, it is undeniably something he has. This is precisely why his tears had such resonance. Here is a man whose language never fails him, making a speech he has made so many times before, but for a mesmerizing moment, because of those tears, there is a literal break in his voice.

I was of course curious about what Donald Trump might say about this. There could be no better foil for Smith’s many-voiced Obama than the quintessentially single-voiced Trump, a voice so comically one-dimensional that any professional impersonator with just the slightest resemblance and a wig has it made. Smith draws our attention to Obama’s sparing use of the word “I” during his campaign, opting of course for “we,” which she recognizes as the safe choice for those with many voices. Trump uses the letter “I” like a stick to beat us with. But if the polls don’t lie, Americans are not as weary of Trump’s contradictions as they are with what they take to be Obama’s equivocations. 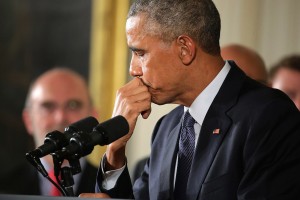 Trump won’t say one thing and mean another. He will say one thing, and then another. And then another. Compare “yes we can” with Trump’s campaign slogan, “make America great again.” At best it’s directive, but coming from Trump, it’s unmistakably an order. Yet even Trump himself seemed respectfully moved by the tears Obama shed during his speech. He may have denounced everything else in it, but on Fox News last Wednesday, Trump said: “I actually think he was sincere, I’ll probably go down about five points in the polls by saying that, but I think he was sincere.”

Obama’s relentless speeches on gun control have turned out to be something of a true test for the many-voiced man. Watch this versatile orator deliver the news of these massacres, on loop, without any reform to speak of in-between, and see if he will lose the name of action. The Charleston massacre marked a very real breaking point in these speeches, when the sheer number and routine of these atrocities had become an unbearable moral outrage to him and to the victims he spoke for.

He told the American people of his frustration at having to repeat the same singular speech, with its prayers and condolences, like a useless recording. He attempted to do justice to these atrocities the only way he could, by refusing to let his speech normalize them. After all, even the first time a speech like this has to be given, it is already inadequate; it already blasphemes by attempting to put into words the unspeakable suffering and violence it supposes to address. Instead, we have a kind of shorthand, which is the best we can do. The mention of his own children. The mention of ours. It’s not a small thing to ask of our world leaders, to put any words to horrors like this. To talk after Sandy Hook, when everyone thought, truly this had to be it. To speak to parents of the preventable violent deaths of their children. This is a presidential address, when it should be Lear, howling.

Smith comes around to Shakespeare at the end of her essay on the many-voiced person. In the arts, unlike in politics, this multiplicity of voice is free from suspicion and can be what it is, a kind of genius. And with this multitude of voices, Shakespeare put words to unnatural tragedies we would otherwise think incommunicable. The many-voiced phenomenon seems to serve both poets and world leaders in the face of terrible violence, although it is definitely more effective for the poets — better in the end for spurring Catharsis than Congress.

As the president admitted in his speech, even with his executive action, this will be a long fight that will continue to be fought long after he has left office. Even so, it is some service to continually wrestle this cause into language, and keep these events from passing into a monotonous reality. In the face of the bloodshed America has wrought upon itself with its guns, I’d say a Greek chorus behind that podium would serve them better; but in their place, this one man, with his many voices, has surely tried.