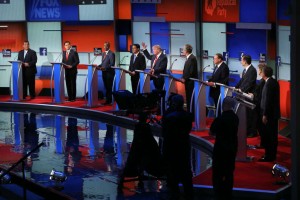 The most primal scene in American politics is a debate stage, where candidates wrestle in rhetorical mud for dominance. Of course, when the candidates are auditioning for the presidency, their aggression is sublimated, their rapiers metaphorical. (When political attacks merge with the physical kind, the combatants are no longer in a democratic republic as Americans understand the term.)

Among the innovations Donald Trump has brought to the Republican Party — along with an infusion of reality TV culture, a cult of personality and a refurbished authoritarianism — is a cruder brand of machismo than presidential-level politics has generally been willing to indulge.

Not that machismo in the service of personal or partisan advantage is anything new. William McKinley’s 1896 campaign literature described him as “one of the best examples of courageous, persevering, vigorous manhood that the nation has ever produced.”

When George W. Bush appeared in a flight suit to celebrate what his White House, at the time, deemed a heroic “mission accomplished” in Iraq, conservative talk show host (and Watergate conspirator) G. Gordon Liddy noted that Bush’s sculpted costume made “the best of his manly characteristic.”

Manliness, or the projection of it, does not necessarily discount wisdom and discernment; it simply gives those necessary political qualities a primal ground. Debates are typically a revealing arena for that. “Each debate to date has been a scramble for mastery,” wrote David Frum in September. “Who acts like a commander? Who submits to command?”

A parallel competition is evident at Democratic debates. But a female alpha is not the only sharp distinction between the parties. The GOP’s ever expanding use of symbolic postures (warm congratulations on another successful Obamacare repeal vote, by the way) and conservative cultural referents and imagery (cowboy boots are the appropriate uniform for a Princeton-and-Harvard-educated lawyer who’s married to a Goldman Sachs exec) threaten to eclipse more relevant kinds of signaling about leadership, such as expertise or experience. That’s also how you end up with proposals to carpet bomb our way to success in the Middle East.

To survive the faux Wild West of today’s GOP, Rubio will have to man up 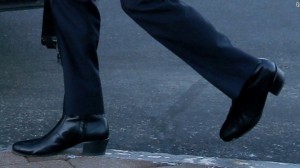 In a series of tweets reacting to a Republican brouhaha over Marco Rubio’s too elegant boots, Vox’s David Roberts remarked: “This pretending, this sexually insecure overcompensation, has been going on so long that it’s become the point.” Roberts meant that conservative voters well understand that Ivy-League-pedigreed Ted Cruz is no cowboy, but Cruz and other conservative politicians are nonetheless required to embody conservative archetypes as a kind of homage.

In early debates, Trump’s interruptions, derision and bluster seemed to rattle Jeb Bush, a largely successful two-term governor of one of the nation’s largest states. (Politico: “Bush Allies Worry: Is Jeb Tough Enough?”) But Bush, a policy sophisticate, is now getting the hang of things. The super PAC supporting his candidacy, run by a veteran consultant who has known Bush for more than two decades, this week released an Internet ad focused on . . . Rubio’s boots.

There was chatter on Twitter about the ad’s stupidity. But it achieved its goal. It featured a rework of the 1966 Nancy Sinatra hit “These Boots Are Made for Walkin’” (among core GOP voters, 1966 was yesterday) and a pair of gyrating boots like the Rubio pair that had caused a stir. The lyrics were retooled to highlight Rubio’s flip-flops. The combination of the twirling high heels and Rubio’s inability to stand his ground on key policies painted the Florida senator as a girly-man. In a subsequent interview with MSNBC’s “Morning Joe,” the 6’3″ Bush personally advanced the attack. He didn’t need heels himself, Bush said, because “I don’t have a height issue.” (Rubio is 5’10”.)

Rubio increasingly risks being on the wrong end of a showdown. To survive the faux Wild West of today’s GOP, he’ll have to man up — or, more to the point, pretend to in a manner instantly recognizable from Hollywood melodrama. Rubio can keep his comfortable life as a well-groomed lawyer living in an upscale West Miami neighborhood. But when he takes the stage to debate, he’d do well to don a ten-gallon hat and a six-shooter.