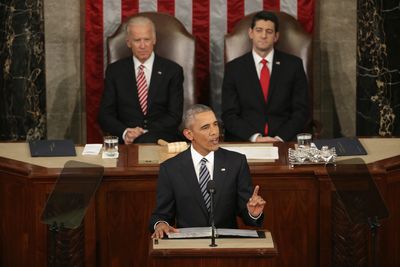 Early in President Barack Obama’s final State of the Union, there was a blink-and-you’ll-miss-it jab at Donald Trump. But later in the speech, Obama really got into it — and he got emotional.

He didn’t say the name Donald Trump, but he didn’t have to. He just talked about the real-life consequences to real Americans when politicians promote exclusion and turn a blind eye to violence.

When politicians insult Muslims, whether abroad or our fellow citizens, when a mosque is vandalized, or a kid is called names, that doesn’t make us safer. That’s not telling it like it is. It’s just wrong. It diminishes us in the eyes of the world. It makes it harder to achieve our goals. And it betrays who we are as a country.

Donald Trump hasn’t personally vandalized a mosque or bullied a child. Nor has he explicitly condoned those things. But the success of his campaign has both reflected and helped legitimize a rising tide of anti-Muslim sentiment in the US in recent months. All indications are that hate crimes against Muslims are on the rise.

Donald Trump does not do these things. He makes excuses that his followers are “passionate.” He says the victims deserved it. He, now, jokes with his supporters that he’ll have to condemn things just because the press expects him to condemn them. He is, in other words, doing the opposite of what Obama did tonight — saying explicitly that this is wrong, that it is un-American, that it should not be condoned.

It was the most emotional part of Obama’s final State of the Union. He didn’t shed tears (the way he did when proposing new gun control measures), but he was clearly full of emotion. And many of the people in the room responded to him — he won the longest ovation of the night, and many attendees (mostly Democrats) stood up to join him in condemning these acts.

Many Republicans did not stand. Whether they were upset that Obama was attacking (however indirectly) their party’s frontrunner, whether they were defensive because they felt Obama was accusing them of inciting violence, or whether they simply don’t believe it is a politician’s problem when a person vandalizes a mosque is unclear. President Obama’s words were as full-throated a call for politicians to take responsibility for their followers’ actions as one can imagine — but the visual showed that idea still isn’t fully accepted.