Home
Science
Green energy: How one power plant chips away at the UK's carbon footprint 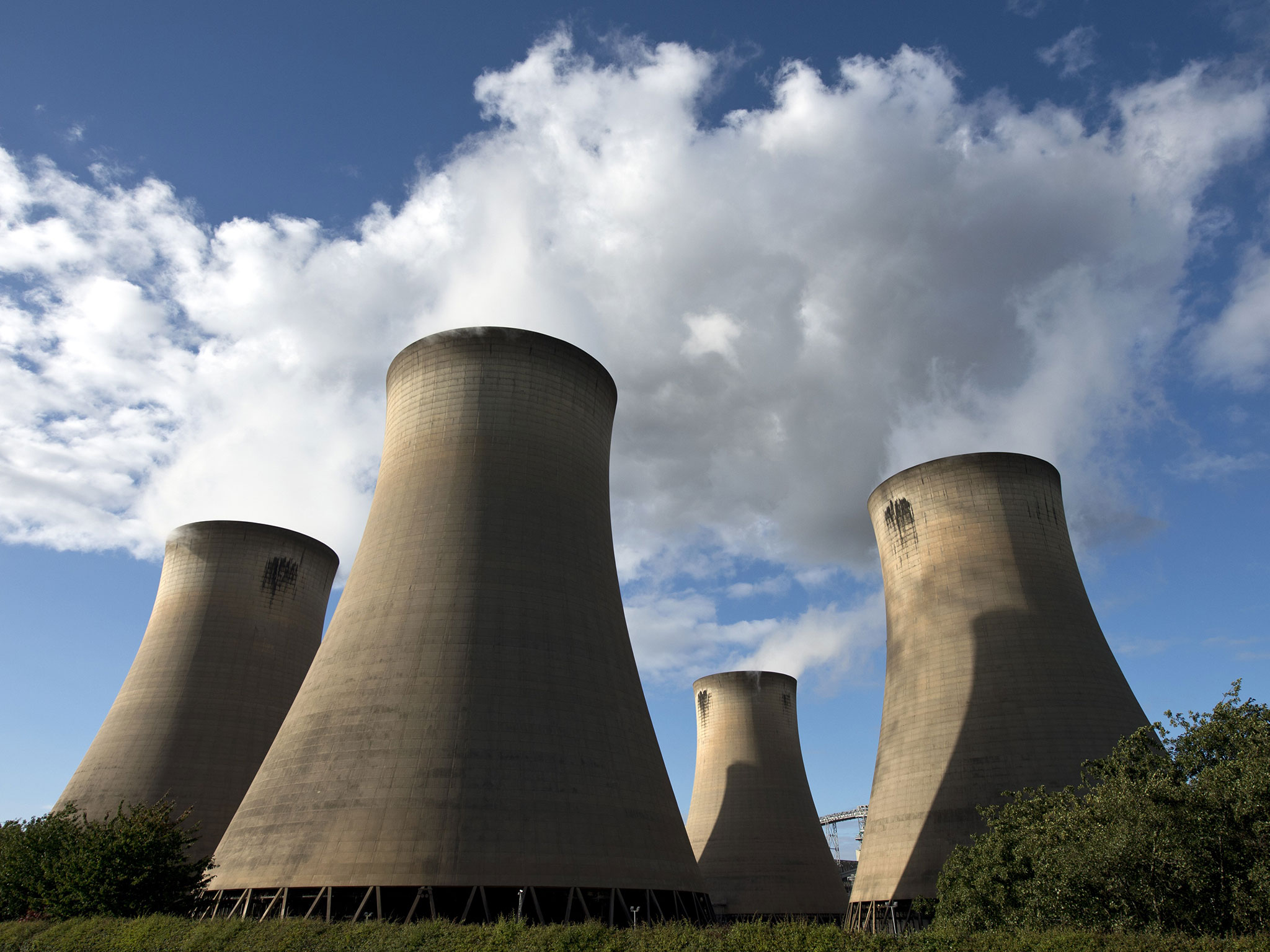 Converting a coal-fired power station to one that burns wood might sound easy enough, until you see first-hand what is involved. It is only when you stand in the middle of the sprawling Drax power station near Selby in North Yorkshire – the biggest in Britain – that you realise the sheer scale of Europe’s largest decarbonisation project.

The first thing to hit you is the difference between how the coal and the wood pellets are stored on site, and the incendiary reason why. While the vast store of coal is spread out, open to all weathers, the bone-dry pellets have to be protected from the elements in four huge storage domes 50m (164ft)  high – about 30 per cent taller than the Royal Albert Hall.

Whereas coal is fed into a power station when wet (it quickly dries out when milled into dust for the furnace), the wood pellets become unusable if damp. So they have to be kept dry inside their storage domes, which themselves have to filled with nitrogen gas to limit the risk of spontaneous combustion.

But this is just one of the many differences between the old and the new Drax. Converting a power plant from coal to biomass fuel has never been done on this scale anywhere in the world – and the engineering involved has broken new ground.

Drax, named after a neighbouring medieval village (not the fictional James Bond villain created by Ian Fleming), is Britain’s largest power station and was once its single biggest emitter of carbon dioxide thanks to its huge appetite for the dirtiest of all fossil fuels – coal.

Drax’s six huge, electricity-generating turbines can each meet the power needs of a city the size of Leeds. They are driven by the superheated steam from six giant boilers or furnaces, each weighing about the same as 32 blue whales.

They rely on the heat of the power station’s six units, now partly powered by biomass in the form of compressed wood pellets imported from commercial forests overseas, mostly in the eastern United States and Canada.

Two of the six Drax units are fully converted to biomass. A third will be burning 100 per cent wood pellets later this year at a total cost of some £700m – and the woman in charge of Drax doesn’t want it to stop here.

“We stand ready to convert a fourth unit,” says Dorothy Thompson, the chief executive of the Drax Group – who, since she joined the company 10 years ago, has pushed through one of the world’s most ambitious decarbonisation projects, which some experts had doubted as workable.

The wood pellets used as biomass fuel at Drax are made from low-grade wood such as forest thinnings, tree tops and branches, as well as residue from sawmills and agricultural waste such as straw and seed husks.

The biomass is dried and compressed into pellets the size of peanut shells for easier and more economical transport. They have a lower “energy density” than coal which means that about twice the volume of biomass is needed to produce roughly the same amount of heat and electricity.

This basic rule of physics, combined with the fact that the biomass pellets have to be stored dry in huge domes rather than spread out in the open air, means that Drax has moved from having more than 70 days of fuel stocks when it was a completely coal-fired power station, to having about 13 days of biomass stocks.

“We have never worked on that timescale before. We weren’t geared up for ‘just in time’ delivery,” said Jason Shipstone, the engineer responsible for the design, construction and commissioning of the new biomass facilities at Drax.

It meant that Drax had to improve its lines of biomass supply from North America so that there was a continuous and regular delivery of the purpose-made wood pellets. They had to be compressed and dried before shipping across the Atlantic to the port of Immingham on the River Humber, where they are transported to Drax by a specially designed fleet of trains.

Wood is also 100 times easier to ignite than coal, which posed a new kind of explosive fire risk. The pellets are so dry they give off a fine dust which can easily ignite, Mr Shipstone said.

“We used to be the biggest carbon emitter in the UK by site, which was rather unpleasant at the time. We were the centre for a lot of protests, and actually we were not comfortable with it ourselves,” Ms Thompson says.

“At the time it was simply thought not possible to burn biomass in a unit of any size that had been used to burn coal… The government was worried that biomass was just a way of continuing the life of coal. We said ‘what if we burned biomass on its own?’,” she says.

The idea behind biomass is simple enough. Wood fuel is in theory a renewable carbon source, because you burn the carbon that has been recently absorbed from the atmosphere by living vegetation, not the carbon of fossil fuel that has been locked underground for millions of years.

If you burn wood pellets from the waste cuttings of the timber industry in a converted coal-fired power station, it should be possible to produce electricity that is largely carbon-neutral, provided the carbon of wood fuel is replaced by the carbon of growing trees – which Drax insists is the case.

Of course, there is fossil fuel carbon that is used – for instance in the conversion of wood waste into dry pellets, and the oil used in the shipping and transport from America to Yorkshire. Even so, Drax estimates the carbon savings compared to coal are still above 80 per cent.

But not everyone is convinced that biomass is that renewable. Environmentalists have criticised the government’s encouragement of biomass burning on the grounds that it has resulted in forests being chopped down without a serious audit of carbon sustainability, as well as other environmental costs, such as the effect on forest wildlife and biodiversity.

Ms Thompson accepts that there is “good and bad biomass”. But she insisted that the biomass carbon from the working timber forests of North America is from waste cuttings – and never simply from trees chopped down wholesale for biomass burning.

“Good biomass is very low carbon right across the supply chain and comes from a truly sustainable source. All the biomass we burn is good biomass,” she says.

“The first thing is that it must come from a sustainable forest. The second it that it must be low carbon, and we measure the carbon cost at every single point across the supply chain. The biomass we burn here at Drax accounts for 86 per cent of the carbon savings compared to coal,” she explained.

Each stage of the process, from forest, to wood-pellet production, to shipping and burning at Drax, is audited independently by outside contractors, Ms Thompson emphasised.

“The reason why I can be very confident that we are doing the right thing is that since 2008 we have audited our compliance with those rules. We use low-grade wood from working forests and, essentially, if we weren’t using it, it would probably go to waste,” she says.

“We are not simply cutting down forests. These forests are grown for their valuable saw log… We’re taking a sliver out of something that’s growing all the time.”

Drax has contracts with American timber companies extending over the next 10 or 12 years. It currently uses about 7 million tons of biomass waste each year, which is a fraction of the 93 million tones of biomass waste produced annually in the US alone, Ms Thompson says.

But the big question for 2016 is whether the Government will continue to invest in Britain’s biggest decarbonisation project in its next round of renewable-energy subsidies. Drax needs these renewable subsidies to continue converting its three remaining coal-fired units – although it can operate if it has to on just the three existing biomass units.

The signs so far are not looking good. Although the Government says it is committed to cutting carbon emissions and phasing out all coal-fired power stations by 2015, it has cancelled its flagship carbon-capture and storage project, to the deep disappointment of companies still in the fossil-fuel business – including Drax.

The question for Drax is whether it has a long-term future as one of Britain’s biggest, sustainable power generators; or whether it will limp on at half steam until its existing biomass contracts fizzle out at the end of the next decade.

Five missing kings and queens – and where we might find them