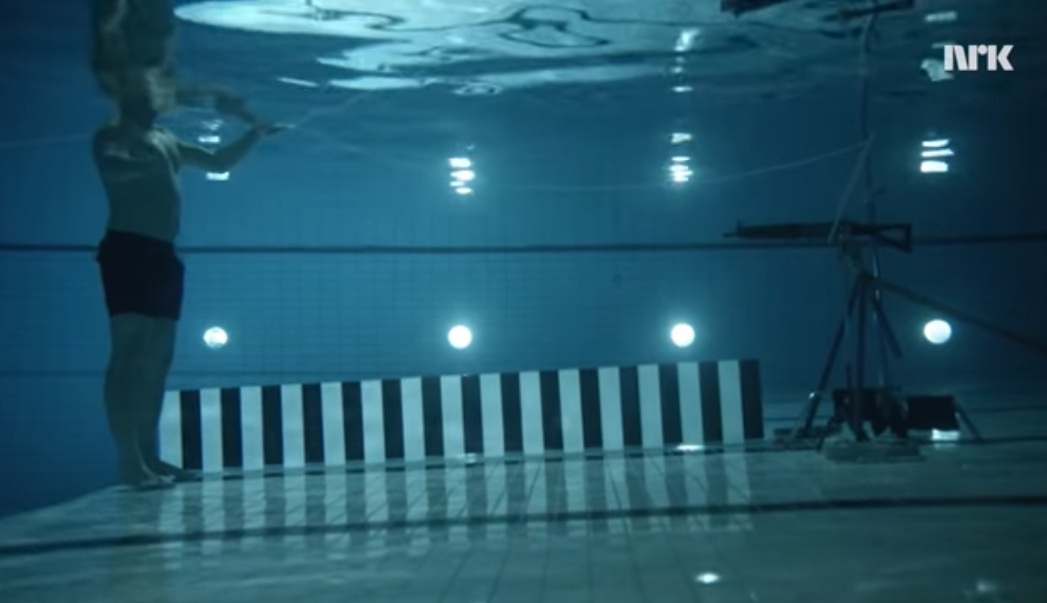 A daredevil researcher who wanted to see what would happen if he fired a gun underwater used himself as the target.

Andreas Wahl filmed himself standing in a swimming pool with his bare chest facing the loaded barrel of an assault rifle.

Almost unthinkably, Mr Wahl maintains his composure in the video as he stares straight ahead before pulling a long rope rigged to the weapon’s trigger.

He can be heard saying “shot coming” before counting down from three and setting the gun off.

But, in line with Mr Wahl’s predictions, the bullet sank before it even reached halfway – sparing the scientist’s life.

Water bubbles followed the bullet as it shot towards Mr Wahl

This is despite the fact that the bullet was discharged with the same force as it would have been if it was fired above the water, and made the same loud “boom”.

In the video, which was posted to YouTube, Mr Wahl says: “It’s harder to create movement in water than in air, because water molecules are closer together than air molecules.”

The footage shows him looking rather relieved – before he dives down to the bottom of the pool to retrieve the bullet, which he brandishes above his head in victory.

According to the Science Channel’s #1 series Outrageous Acts of Science, as reported by Mail Online, guns actually work in the same way underwater as they do in the air.

But the reason Mr Wahl was not injured by the bullet is because water is 800 times denser than air, which stops it from travelling so far and so fast.

This resistance slows the bullet down and causes it to sink to the bottom.

It is not the first dangerous stunt Mr Wahl has attempted – previous experiments have seen him soaking himself in water before trying to roast himself in a fire.

Green energy: How one power plant chips away at the UK's carbon footprint