Home
Politics
Is Marco Rubio surging in Iowa? Here’s what to watch for. 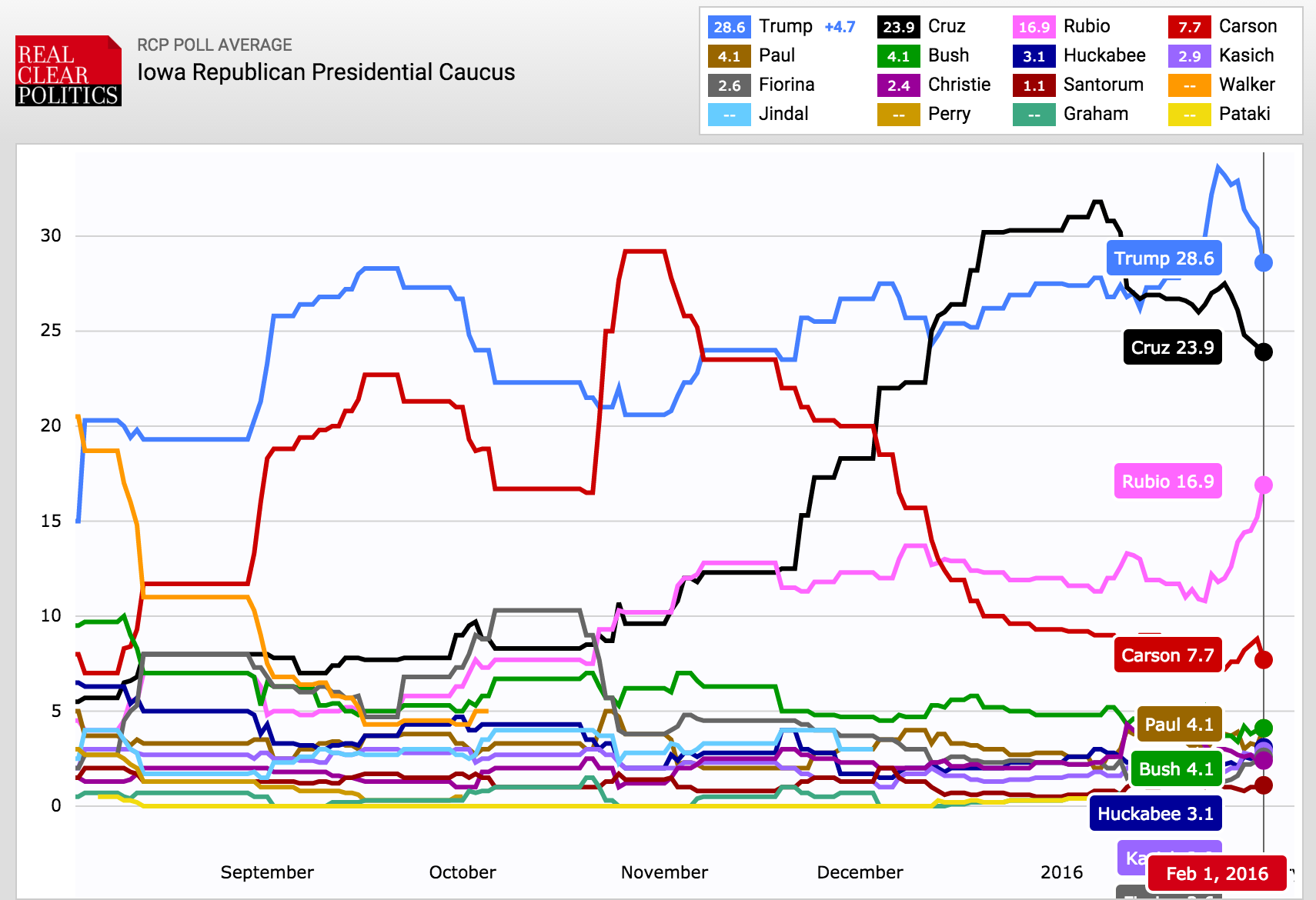 Marco Rubio’s shot at being a real contender for the Republican nomination depends a lot on his performance in tonight’s Iowa caucuses.

He’s picked up in the polls in the past few days, leading some observers to hype a “Rubio surge” — a phenomenon some have compared to Rick Santorum, who pulled out a win in Iowa in 2012 thanks to supporters who made up their minds at the last minute. But this is far from the first time pundits have predicted that Rubio will start to gain momentum in this race — and time after time, they’ve been proven wrong.

Rubio almost certainly won’t pull a Santorum and win first in tonight’s caucuses. But he might “win” — in the sense of beating expectations, gaining momentum, and even making a case that the Republican establishment should finally consolidate their support behind him. Tonight’s caucuses will finally answer the question: Has the Rubio “surge” finally arrived?

The best-case scenario for Rubio

On the day of the 2012 Iowa caucuses, Rick Santorum was polling at about 16 percent in the state — putting him in third place behind Mitt Romney and Ron Paul. But when the caucus votes were counted, Santorum had won — gaining the support of 24.6 percent of caucus attendees and squeaking ahead of Romney. Replicating that success would be a dream come true for the Rubio campaign.

As of today, the day of the 2016 Iowa caucuses, Marco Rubio is polling at about 17 percent of the vote — putting him in third place behind Donald Trump and Ted Cruz. And his support has been ticking up: He’s gained 4 percent in the RealClearPolitics polling average over the past week, while Trump and Cruz have lost a couple of percentage points apiece.

Add that to the conventional wisdom that a lot of Iowa caucus-goers make up their minds in the last days before the caucuses, and it’s been very tempting to subscribe to the idea that a last-minute Rubio surge could push him to second place, or even first, when the votes are counted.

It’s not just about the polling. Anecdotal reports from the campaign trail in Iowa, like this Politico article from over the weekend, indicate that Rubio is campaigning and being greeted with enthusiasm (which is mostly notable since Rubio’s been knocked for not putting in enough face time in Iowa).

The most significant piece of evidence for a Rubio surge: Late last week Ted Cruz’s campaign pulled all its ad money from ads attacking Trump and put it toward ads attacking Rubio — a sign that it’s feeling threatened.

At this point, “political reporters say Marco Rubio is about to catch fire” is something of a running joke. Pundits said Rubio won the first Republican debate, and it resulted in a polling surge for Ben Carson. Many (Vox included) said he also won the second Republican debate, and it resulted in a mini surge for Carly Fiorina. When Carson finally slipped below second place in early December, Rubio looked like he’d be the beneficiary — only to be overtaken by Ted Cruz.

So it’s always possible that observers are seeing evidence of a Rubio surge because they want to see one. And that might be happening again in Iowa.

Let’s look closer at the comparison to Rick Santorum in 2012. For one thing, Rubio’s facing tougher competition: Trump and Cruz are both polling better than any of the 2012 candidates. Santorum was only 6 percentage points out of first on the eve of the caucuses; give Rubio a 6 percent bump, and he would still be barely behind Cruz.

More importantly, it’s not clear that Rubio will surge at all. As various reporters have pointed out, the Santorum surge wasn’t totally unexpected: You could see it over the last several days of polling, especially in the widely respected Des Moines Register poll, as the last-minute voters started to make up their minds.

That … didn’t happen for Rubio.

In fact, the Des Moines Register poll shows that Rubio’s support is pretty soft. Only 47 percent of his supporters said their minds were made up. Compare that with 71 percent of Trump voters and 61 percent of Cruz voters.

What really counts as a win for Rubio in tonight’s caucuses?

Marco Rubio is very likely to place third in the caucuses, behind Trump and Cruz.

But if Rubio manages to place lower than third, doing worse than expected, it will be a very bad look for the campaign.

The Des Moines Register poll showed Rubio getting 15 percent of the vote, about 8 points behind Cruz. Consider that his floor. If he gets 15 percent tonight, it’ll give the lie to the idea of a last-minute Rubio surge, and the campaign won’t exactly have anything it can point to coming out of Iowa to give supporters confidence. It won’t be enough to end his campaign, but it will make it easier to treat the Republican primary as a two-man race.

If Rubio overperforms his standing in that poll — say, by getting 20 percent of the vote or more, or by placing only 5 points behind Cruz — it will show that maybe the Rubio surge is for real. That’ll be good news for him. And if he manages to get something closer to 25 percent — essentially consolidating the support of non-Trump, non-Cruz voters — or to come within a few points of Cruz, that would be a very good sign indeed.