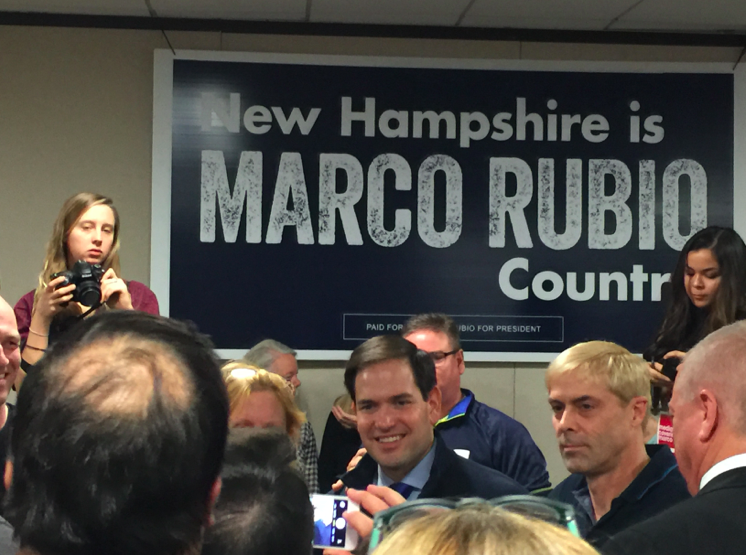 STRATHAM, NH — Last Saturday’s debate may have left you with the impression that Marco Rubio is an overly scripted robot.

But two days earlier in New Hampshire, I saw something quite different — a skilled, eloquent, and talented political performer who could expertly modify his message depending on whom he was addressing.

One version of Rubio fired up the conservative base at a town hall in Manchester on Thursday afternoon — repeatedly attacking President Obama, returning to conservative hot-button issues like Obamacare and sanctuary cities, and laying out how he thought his party could best defeat the Democrats. This was Rubio the conservative Republican, playing to his base.

But earlier that day, the Florida senator made a remarkably different presentation to a room full of Timberland employees at the company’s offices in Stratham. To this nonpartisan crowd, Rubio worked hard to portray himself as pragmatic, positive, and connected to working people’s struggles. He spoke passionately about student loans and vocational education rather than culture war issues. And he avoided his usual Obama-bashing and partisan applause lines almost entirely, instead blaming “both parties” and “leaders” in general for the country’s woes.

Rubio came off as the anti-Romney, and brought to mind Obama in 2008

At Timberland, Rubio came off as the anti-Romney, extensively drawing on his family’s working-class background to argue that he understands and cares deeply about working people’s struggles. He also brought to mind Obama in 2008: the young, handsome, likable candidate who offered a new approach, and whose words just made people feel good.

I felt like I was getting a glimpse into how Rubio would campaign if he did end up winning the nomination, and it seemed that he truly could appeal to a broader range of voters than most Republicans. Far from being robotic, Rubio came off as quite personally appealing and adept at reaching people. He looked like an incredibly formidable candidate overall — like someone whom Republicans who want to win should seriously consider nominating, and whom Democrats should be very afraid of.

In the 20-minute speech he delivered at Timberland, Rubio again and again tried to communicate one key point: that he cares about ordinary Americans’ struggles because he doesn’t come from privilege.

Later he brought up student loans, and again tied his personal story into the issue. “This student loan thing is a crisis,” he said, “and I’m passionate about it because I had a student loan. Three years ago I still owed over $100,000. I had no idea if I was ever gonna pay it off.” A minute later, he pointed out, “I’m the only Republican that consistently talks about student loan debt. Because I think I’m the only one running for president as a Republican, maybe at all, that ever had a student loan.” That’s inaccurate, since Ted Cruz, for instance, has said he too had more than $100,000 in student loans — but it was meant to communicate that Rubio gets it. It was the antithesis of Mitt Romney’s infamous “47 percent” comments.

“He’s had to work, and he’s not as privileged,” one voter told me. “I appreciate him being able to relate to folks.”

Overall, Rubio stuck to a practical, economics-focused agenda that seemed perfectly tailored to appeal to swing voters. In his speech, he proposed improving the economy, dealing with the student loan crisis, improving vocational training, making energy more affordable, simplifying the tax code, rolling back unreasonable regulations (but not all regulations — “I’m not an anarchist,” he said), expanding “trade in a “fair” way, and addressing the debt crisis. He sounded a whole lot like a pragmatic technocrat, trying to make the government work better for everyone (albeit one with more inspiring rhetoric than most technocrats tend to use). And Rubio didn’t even mention Obama’s name once in his speech — all the better to appeal to uncommitted voters who might like the president.

Now, Rubio touches on many of these same topics in his ordinary stump speech. But at the more partisan event two hours later in Manchester, conservative red meat was in abundance too. Rubio went after Obama every few minutes, calling him “a terrible commander in chief” and saying he “viewed the Constitution as an outdated document.” Rubio also discussed his desire to get rid of Obamacare, to defend religious liberties from attack, to protect kids from popular culture’s negative influence, to repeal all of Obama’s “unconstitutional executive orders,” and to take away federal funds for sanctuary cities — all of which went unmentioned in his speech earlier that morning.

Rubio was trying hard to convince the Timberland employees that he wasn’t just any Republican, and it seemed to work like a charm. “I loved his speech today. I loved everything he said,” said Janice Williams, a Timberland employee who told me she usually votes Democratic. She said Rubio’s stance on same-sex marriage could be a problem for her, but nevertheless, “I liked him a lot.”

Another Timberland employee from Windham — who declined to give his name but said he’d likely vote for Rubio on Tuesday — was impressed by Rubio’s humble background. “He’s more kind of like us,” the employee said. “He’s had to work, and he’s not as privileged. I appreciate him being able to relate to folks.”

Most Democrats have long believed Rubio would be the toughest Republican to beat in the general election, but Saturday’s debate gaffe has convinced some he’s a paper tiger. Even before that, former Obama speechwriter Jon Favreau made the case that taking down Rubio would be “easier than you think” — arguing that Rubio’s record of far-right positions and his “cowardly and self-serving” flip-flopping on immigration make for an “easy story to tell.”

Yes, Democrats will certainly try to tell that story. But Republicans tried to tell various stories about Barack Obama in 2008: that he was ultra liberal, that he was untested, that he was an empty suit. None of it worked all that well.

This was partly because, as Obama himself wrote in his 2006 book, his newness as a political figure let many different people imagine that he would fulfill their various hopes and aspirations. “I serve as a blank screen,” Obama wrote, “on which people of vastly political stripes project their own views.” And it was partly because people were frustrated with the direction of the country and wanted change — just as they are today.

There’s a similar phenomenon at work with Rubio — at Slate, Reihan Salam recently referred to it as Rubio’s “chameleonlike nature.” Indeed, Kevin Moulton, an undecided voter from Exeter at a Bernie Sanders event Saturday, told me he was considering voting for either Rubio or Sanders. “Rubio has inspiration. He has potential,” Moulton said. Though he’s a registered Democrat, he said he considers himself an independent these days, and said he was “open-minded about conservative economic policies.”

And Ruth Dabrowski of Manchester, who attended a Rubio town hall Thursday afternoon, told me she had been deciding between Rubio and Donald Trump. “I was going with Trump,” she said. “But I went to see him, and all he talked about was how bad the Union Leader was, and putting down different people from our state. I never heard him say anything else! In fact, I left early.” Now, she said, she was “really leaning toward Rubio,” who she thought was “smart.”

Of course, Rubio’s electoral potential looks even more promising if you imagine him pitted against Hillary Clinton, who has been a known partisan quantity for decades, who majorities of Americans don’t think is honest or trustworthy, and who was paid hundreds of thousands of dollars for speeches from Goldman Sachs. Sure, Democrats will try to use the playbook Favreau outlines to paint Rubio as an ultraconservative. But when their candidate is Clinton rather than Obama, are they really likely to win on the character issue?

So, yes, Rubio had a bad night in one debate. That can happen to anyone — it happened to President Obama! But don’t underestimate him just yet. At a time of political frustration and gridlock, Rubio’s pitch — that people shouldn’t just “elect the same people, the same names we’ve been hearing about over and over again” — could be a winner.