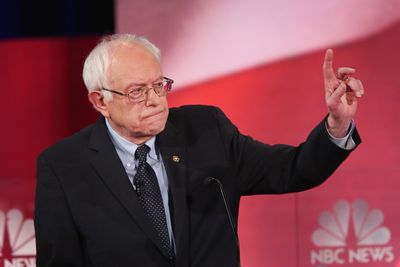 Like most journalists, I’ve been covering Bernie Sanders’s 2016 primary campaign as fundamentally more about making a point than about electing a president. He’s out there to talk about his issues, to shift the terms of the debate, and to force Hillary Clinton to commit herself to progressive causes.

And it’s been working.

Working so well that polls show Sanders steadily narrowing the gap with Clinton in national polls, while pulling even with her in Iowa and ahead in New Hampshire. Working so well that Sanders’s once-amateurish debate performances have now turned much sharper, more detailed, and on point. Working so well Sanders demands to be taken seriously as someone who very well could be a major party presidential nominee or even sit in the White House.

But take a look at him through this new lens and his big, bold ideas — though a valuable contribution to the debate — just don’t look very much like a governing agenda or even a basis for grinding general election campaign.

After reading Dylan Matthews’ article on how Sanders plans to pay for his Medicare-for-All plan, I decided I should dive into the plan myself to learn about some other aspects of it. For example … how does the actual health insurance that everyone is going to get work? What is covered?

Well here it is in full:

Bernie’s plan would create a federally administered single-payer health care program. Universal single-payer health care means comprehensive coverage for all Americans. Bernie’s plan will cover the entire continuum of health care, from inpatient to outpatient care; preventive to emergency care; primary care to specialty care, including long-term and palliative care; vision, hearing and oral healthcare; mental health and substance abuse services; as well as prescription medications, medical equipment, supplies, diagnostics and treatments. Patients will be able to choose a health care provider without worrying about whether that provider is in-network and will be able to get the care they need without having to read any fine print or trying to figure out how they can afford the out-of-pocket costs.

That’s the whole description of the content of the insurance. Is abortion covered? Is acupuncture? What if there are shortages of medical equipment? What if a doctor wants to prescribe a course of treatment that’s not supported by science?

Sanders has nothing to say about any of this. In the debate he thundered rhetorically: “Tell me why we are spending over three times more than the British, who guarantee health care to all of their people?”

As it happens, there is an answer to this question: In the United Kingdom, the central government acts to comprehensively set wages and salaries for doctors and other health care providers. They set them at levels far lower than what we see in the United States. And a government board with the friendly acronym NICE serves as a centralized authority empowered to decide what treatments will and won’t be paid for (death panels, in short).

Sanders’s “plan” doesn’t cover any of this ground. Worse, his worldview doesn’t seem to accommodate the questions. Instead, he says the only relevant issue is “whether we have the guts to stand up to the private insurance companies and all of their money.”

The thing that first got people I know excited about Sanders was his repeated call to eliminate tuition at public universities. He does this by saying the federal government will pick up two-thirds of the tab if state governments carry the rest. Sounds good. And he’ll pay for it with a new tax on speculative trading on Wall Street, another big applause line.

But again, there are big questions here: What if states make this work by pushing more costs into the room and board column? What if public university systems are swamped with applicants now that they’re free? What if eliminating tuition means students start taking longer to complete their degrees? What if the underlying cost of providing a college education grows faster than the volume of Wall Street trades? What about the quality of college education?

Sanders’s proposal makes a point, powerfully. It says that higher education is more socially valuable than high-speed trading in financial markets so we should tax the latter to subsidize the former. There’s nothing wrong with introducing legislation that’s primarily designed to make a point when you’re a member of Congress who sits far from the center. But a president needs answers about how his plans are actually supposed to work.

On the complicated issue of regulating the financial sector, Sanders said at the debate that “it is clear what you have to do. Bring back the 21st Century Glass-Steagall legislation and break up these huge financial institutions.”

What does that mean? Well, Sanders has a bill called the Too Big To Fail Too Big to Exist Act, which is a nice slogan. But as Nancy LeTourneau wrote last spring before Sanders was getting scrutiny, when I hear positive things about this proposal “I have to wonder if any of these folks have actually looked under the hood to see what’s actually in the bill.” The answer is that nothing is under the hood.

The bill is only four pages long, and what it does is direct the Financial Stability Oversight Committee to compile a list of banks that are deemed “too big to fail” and then break them up.

This just isn’t the way bank regulators think or work. There’s no such thing as a bank that’s “too big” to fail. There are specific situations in which the failures of certain financial institutions could be gravely threatening to the stability of other financial institutions and set off a chain reaction of bank failures that devastates the economy. Sanders’s legislation offers regulators no guidance as to what criteria are supposed to be used to identify institutions that are to be broken up, and says nothing much about how the breakups are supposed to look or work.

“A bank that’s too big to fail is too big to exist” is a great line for a stump speech or a television appearance. But it’s not even the beginning of an actual agenda on bank regulation.

Sanders needs to take his own campaign seriously

Bernie Sanders’s campaign and his most fervent supporters are going to read this article as harsh — and in many ways it is. But the truth is, I think there’s a lot to like about Bernie Sanders. I share Sanders’s admiration for the Nordic social model, I agree with him in principle about single-payer health care, I appreciate that he has cosponsored sophisticated bank regulation bills like Sherrod Brown’s collaboration with David Vitter, and his advocacy of a financial transactions tax is admirable. To the extent that Sanders is running a campaign that’s about raising issues and securing national attention for some ideas that don’t normally come up on Meet The Press, I applaud him.

Which means that we in the media need to start taking his campaign seriously, but also that Sanders himself needs to take his campaign seriously. Build a real model of the higher education plan. Come up with some notion of what kind of health insurance the BernieCare single-payer plan is going to provide. Address the whole range of outstanding issues with Obama’s Wall Street agenda. Maybe talk to some people about foreign policy. We appreciate that it’s not his passion in life, but it’s a crucial part of the job and he needs to be more comfortable talking about it.

A once-dull Clinton coronation is suddenly looking like a potentially exciting race. That’s great. But if the scrappy, not-so-far-behind-anymore underdog is content to run on vague slogans, it could also be a bit scary.