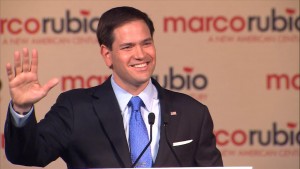 Sure, his rival won the first-in-the-nation nominating contest. And he didn’t even come in second place. In fact, Sen. Marco Rubio, R-Fla., came in third, exactly where we predicted he would.

And yet, seven hours later, in schoolhouses and community centres across Iowa, Republican voters all but ignored Bush, Christie and all the other candidates of the so-called mainstream. They backed instead four insurgents, chief among them, an ultra-right-wing, one-term senator from Texas who is famous foremost for being disliked, and to a lesser degree, a billionaire reality TV host.

But it’s how Rubio came in third that makes all the difference. Polling indicated Rubio would be a distant third, trailing by perhaps double digits in the socially conservative state — an afterthought behind the two candidates expected to duke it out for first: Sen. Ted Cruz, R-Texas, and Donald Trump.

Instead, Rubio came in a very strong third — a third that was very nearly second, as he crept up on Trump’s vote total. In Monday’s Iowa GOP caucuses, Cruz got 27.7 per cent of the vote, Trump 24.3 per cent and Rubio 23.1 per cent.

Rubio came within a couple hundred supporters of piercing the impenetrable bubble thought to be around Cruz and Trump — and on the two leaders’ own political turf, no less. He over-performed expectations, and for that, Rubio perhaps almost as much as Cruz can call Monday a win.

“For months, they said we had no chance,” he said. “. . . They told me I had no chance because my hair wasn’t gray enough and my boots were too high.”

Then, he pivoted to what can only be described as a general election stump speech — sharing his Cuban immigrant parents’ story of making it in America, knocking Democrat Hillary Clinton for her emails and warning that “everything that makes this nation great now hangs in the balance” of this presidential election.

Rubio’s impressive results in the Iowa caucus — and his speech afterward — were tailored to one simple message: He is the GOP candidate with the broadest appeal to win in a general election, and Iowa proves it.

Rubio is arguing that Iowa is proof that his strategy, to be many things to many different people, is working. He was never expected to win among such a conservative electorate, so the fact he got so close to the two who were — even after going on the defense for supporting immigration reform in 2013 — suggests he has staying power among the social conservative community while he carries the mantle of leader of the establishment pack. (The next establishment candidate, former Florida governor Jeb Bush, came in sixth place Monday with 3 per cent of the vote.)

Still, one great night does not a nomination make.

There are some holes in his argument, like Rubio’s support in Iowa may not be as widespread as he indicates. He won support in Iowa’s metropolitan areas, where voters tend to be more moderate, and didn’t appear to win a single other.

And Rubio is going to need whatever momentum Iowa gives him for the next contest, New Hampshire’s primary. There, a more moderate state that should be more in Rubio’s wheelhouse, he is fifth and has been criticized for not campaigning very hard.

Daring to look even further ahead, Rubio is in a familiar position in South Carolina: Third behind Trump and Cruz. But we’ll note that, as Iowa votes were being tallied, Politico reported the well-liked Sen. Tim Scott, R-S.C., is expected to endorse Rubio in his state’s primary. And there, Rubio’s good night became even better.

Time will tell whether Rubio’s strong Monday night will be a turning point for his campaign. But for now, he’s the candidate whose showing was probably the biggest surprise of the Iowa caucuses.