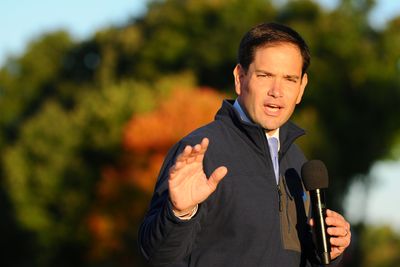 Back in 2008, when he was speaker of the Florida House, Marco Rubio wanted to give Florida’s state environmental agency a “mandate” to design a “cap-and-trade or carbon tax program.”

That’s from the short video clip below, which surfaced on YouTube this week, possibly posted by a Rubio rival in the hopes that it would hurt his GOP presidential bid. (Given that “cap and trade” is now an obscenity among conservatives.)

Start with the fact that 2008 was a crazy time in all our lives. A bipartisan consensus around climate change was slowly sprouting in Washington. Newt Gingrich and Nancy Pelosi were cutting joint ads about the need to stop global warming. The Republican presidential frontrunner, John McCain, favored a cap-and-trade program to reduce US greenhouse gas emissions. So did Barack Obama.

Under the circumstances, it sure seemed like Congress would soon pass some sort of climate legislation.

Rubio’s suggestion makes sense in that context. In the interview, he basically says, look, Congress is probably going to pass a cap-and-trade bill in the near future. And many of the proposals on offer will likely give states credit for acting first. So Rubio wanted Florida to get out ahead of the feds.

Here’s the full video of Rubio’s remarks; the key section starts at 22:46:

A few points about this:

1) Rubio’s idea in 2008 was a good one. Carbon pricing, whether through cap and trade or a carbon tax, is widely seen by economists as an efficient way to cut emissions — more efficient than clunky regulations. Simply raise the cost of polluting and give companies incentive to do less of it. And Rubio’s suggestion that states play a key role in crafting policy is fair, since state regulators can often have a better sense of local needs and nuances.

2) The problem is that this (sensible) position has since become anathema in the modern day GOP. After Obama tried to push cap and trade through Congress in 2009 and 2010, virtually all Republicans turned on the idea. (Even John McCain!) The rise of the Tea Party gave climate denial fresh prominence. Newt Gingrich had to beg forgiveness for his apostasy during his 2012 presidential run.

3) So, not surprisingly, Rubio has backed away from his earlier views too. In his modern incarnation, he either avoids mentioning climate change or suggests that scientists don’t really know what the deal is. (They do.) His energy policy mainly focuses on relaxing restrictions for oil and gas drilling. He wants to repeal the EPA’s Clean Power Plan, which is basically a regulation that allows states to craft their own plans to reduce electricity emissions. The plan would allow Florida to design its own statewide carbon pricing scheme, as Rubio suggested in 2008.

It’s unclear if this cap-and-trade video will hurt Rubio or not in the primary. Back in 2012, Mitt Romney managed to slink away from his earlier support for carbon dioxide regulations and grab the nomination. But the clip offers a good glimpse at how radically climate politics has shifted in just eight years.