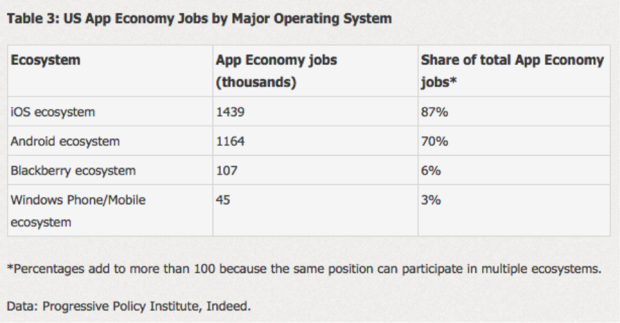 Judging from the apocalyptic response to its Q1 2016 earnings, Apple’s era of dominance is coming to a close. Sure, there’s reason for doom and gloom: iPhone sales limped to their slowest growth since the iPhone was introduced in 2007, and Apple warned revenue will decline for the first time in 13 years.

In fact, this fixation on slowing iPhone sales misses a far rosier picture: Apple customers are doing more with their devices — much more.

This isn’t the first time analysts have fled Apple’s stock. Back in 2013, worried about (wait for it!) slowing iPhone sales, Wall Street traders pummeled Apple’s stock, sending it into a 30.5 percent free-fall over the year.

On the one hand, this is perfectly reasonable, given Apple’s reliance on the iPhone to drive top- and bottom-line growth. But it’s also somewhat silly, since the long game heavily depends upon services, an area in which Apple’s business is soaring.

Three years ago, according to Asymco analyst Horace Dediu, the average iPhone user spent roughly $40 each year on iTunes purchases. Factoring in device purchases, this means that Apple’s installed base generates approximately $300 per user per year for Apple.

Apple categorizes an “engaged” customer as one who has purchased a service (movie in iTunes, app from the App Store, and so on) within the last 90 days. Over the past year, that number has grown 25 percent for Apple, according to Apple CFO Luca Maestri. These engaged customers spent $5.5 billion on Apple services in the quarter, up 15 percent year over year.

Breaking this out a bit, Maestri noted that App Store revenue boomed 27 percent, and importantly, the number of transacting customers grew 18 percent, an all-time record. Oh, and the average spent per customer also hit an all-time high. While Apple didn’t disclose that dollar value, it likely reflects a premium over the 2013 estimate of $40 per user mentioned above.

While iPhone sales may be slowing, use of them is accelerating.

The services train is only getting started

As the report concludes, “From a policy perspective, the iOS ecosystem is likely to have a larger impact on entrepreneurship and the economy in the U.S. That’s because iPhone owners typically have higher incomes, and iOS apps tend to generate higher revenues for developers.”

Otherwise stated, there’s money in iOS and its principal device, the iPhone.

Not only in the devices and in associated services, but also in the transactions we increasingly run through Apple Pay. As noted on the earnings call, “Consumers have spent billions of dollars with Apple Pay. In the second half of 2015, we saw a significant acceleration in usage, with a growth rate 10 times higher than in the first half of the year.”

More purchases mean more revenue for Apple — all of which is reason to think that Apple’s best days are still ahead of it. It’s one thing to sell a phone, but quite another to convince consumers to use it to watch movies, listen to music, pay for groceries, and so on. Apple has persuaded its users to do all of that and stands to collect handsomely.

13 critical questions for Apple heading into 2016

Outlook for iOS and Android gets Skype call scheduling