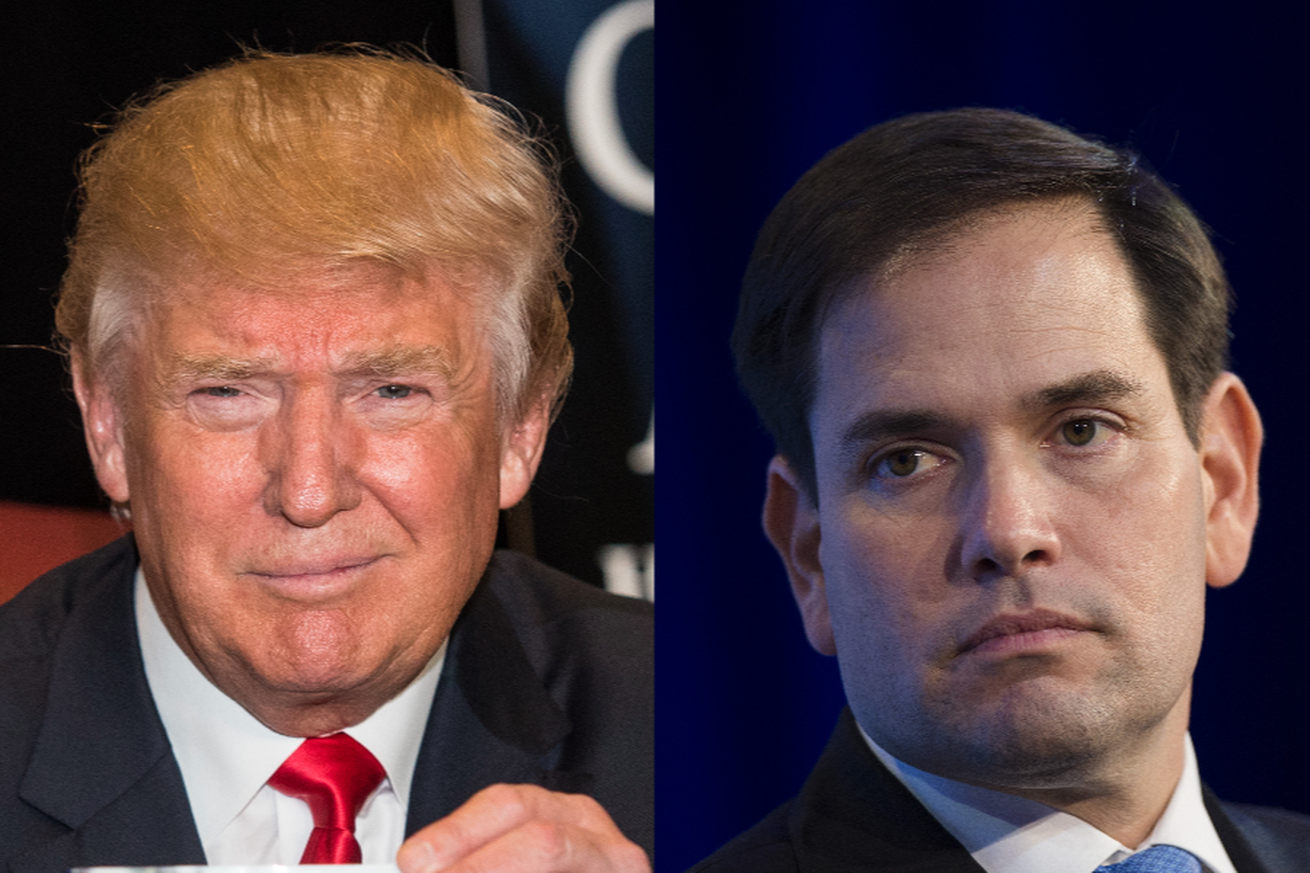 If you want to know why Donald Trump is leading in Iowa and New Hampshire and everywhere else and Marco Rubio is, well, not, you should watch the interviews they did with John Dickerson on Sunday’s Face the Nation.

Trump: I am amazing, and Ted Cruz is a Canadian tool of Goldman Sachs

Early in his interview with Trump, Dickerson notes that seven in 10 voters have “a high level of anxiety” about the Republican frontrunner. “You have talked about how you like to be unpredictable,” Dickerson says to Trump. “Is that unpredictability what causes people anxiety?”

Trump’s answer should be replayed in media training seminars everywhere:

As an example, if I win — I mean, right now, I am the leader by the lot in terms of the Republican side, and I am beating Hillary in the polls. I hate to give you, as an example, an answer. You will ask me a question, a very strategic question, maybe a military-type question, and I have a very strong answer in mind. But there is something about giving you that answer that bothers me very much, because, basically, the enemy is getting that answer.

So when asked why the thought of a Trump presidency scares 70 percent of Americans, Trump answers 1) as if it’s a good thing and proof of his strategic genius, and 2) by reminding the audience he’s winning and is a winner.

Dickerson then moves on to Trump’s favorite topic — his own momentum. “Weeks ago, it was tighter in Iowa,” he says to Trump. “Now you are ahead by a little more. Why do you think that is?”

Trump doesn’t waste his answer. He doesn’t talk about working hard, or the people of Iowa responding to his message, or the incredible efforts of his volunteers. Instead, he shivs his closest rival, Ted Cruz:

DICKERSON: Couldn’t that have just been a mistake?

TRUMP: No. It could have been, but it is — two loans, give me a break, OK? And he is supposed to be Robin Hood for everybody. He didn’t disclose them because he didn’t want to say that he is dealing with the bankers.

Don’t forget he said he sold his assets. But I think much more important is this whole fact that he was born in Canada. And he was a citizen of Canada until 15 months ago. And there is much law right now, and a lot of constitutional lawyers are coming out. Laurence Tribe is sort of middle ground.

In other words, he says it is untested. But there are many lawyers coming out, top constitutional lawyers, that Ted Cruz cannot run for president, he can’t be president because of the fact he was born in Canada. I think that has a huge effect.

Rubio: I am losing, and may have supported cap and trade

Dickerson begins by noting, “There is a lot of chatter that you may be getting a lot of the last-minute votes going your way. How does it feel?” It’s similar to the question Trump got about his momentum in Iowa, but Rubio’s answer is the precise opposite of Trump’s. Rather than try to knock Cruz down, he tries to build him up:

RUBIO: Well, we have always felt great about our campaign here. And we continue to feel that it is growing in our support. We will see what it leads to on Monday night. I mean, Ted Cruz is clearly the frontrunner going into the night. He has 10,000 volunteers on the ground. He has spent an exorbitant amount of time here, tremendous amount of time here, and has gotten every endorsement he wanted.

If you’ve got your Washington Decoder Ring on, you can see Rubio’s strategery: He’s trying to raise expectations for Cruz so a second-place finish in Iowa will be seen as a devastating loss. But that’s the kind of thing Rubio’s advisers are supposed to be doing in phone calls to journalists right now.

On the Sunday before the Iowa caucuses, when he needs to finish strong, the candidate is supposed to be telling people why they should vote for him.

Now that Rubio has brought up Cruz, though, Dickerson notes that Cruz has taken to calling Rubio “the Republican Obama.” This question is a rough analogue to the question Trump got about making voters anxious. And Rubio’s response should also be played in media seminars everywhere — but this time, as an example of what not to do when asked an unflattering question:

It is kind of bizarre, because Ted is leading in a lot of the polls. He has a vast organization here and has spent a lot of money. And his campaign has bragged repeatedly about how well they are going to do here. So it is kind of strange that, at the last minute, they have pivoted all their attacks against me, and disingenuous attacks.

They took a video of an interview that I did in 2007 in Florida, and clipped it, so that my full statement wasn’t heard. And it makes it sounds like I support cap and trade. And this has already been lampooned and mocked for years, because others have tried to do the same thing. So, it is kind of a weird and strange last-minute desperation attack. It is not really — I really don’t understand why. He has got such a strong organization here in Iowa.

Most people, watching this exchange, will come away thinking, “Wait, Marco Rubio might have supported cap and trade?” Rubio took an attack on his campaign most people had never heard and repeated it on national television.

And then there was this back and forth:

DICKERSON: You said the establishment doesn’t want you, but when I talk to people who would be considered good members in good standing of the establishment, they do want you. The Des Moines Register endorsed you. You are the hope against Ted Cruz and Donald Trump.

RUBIO: If that was the case, I wouldn’t have raised only $6 million in the third quarter of last year, and I would be the one with a $100 million Super PAC.

Again, you can put on your Washington Decoder Ring and figure out what’s going on here — Rubio is trying to paint himself (ridiculously) as an anti-establishment candidate in an anti-establishment year. But it’s just a bizarre, meta-interview for Rubio to be giving a day before the Iowa caucuses.

Later in the interview, Rubio gets a bit more into stride and delivers some solid hits on Cruz for flip-flopping on immigration. But for the first half of the discussion, Rubio is tearing himself down, building his opponent up, and complaining about unfair attacks — it’s the interview that a campaign manager privately gives to work the ref, not the interview the candidate gives the day before voting begins.

One reason Trump is ahead in the polls is that he’s simply better at this than his opponents are — he talks directly to the electorates’ id, while his establishment-lane challengers keep trying to win over Washington’s superego.

This next part doesn’t really relate to the rest of this post, but as long as I’m talking about Sunday’s Face the Nation, I’d be remiss not to quote this exchange. The context is Dickerson asking Trump why so many working-class people attend his rallies. Trump’s answer is … something else:

DICKERSON: Even though, to get to your job, you don’t ride three buses and have a second job and all that.

Trump, man of the people, is having trouble remembering which kind of plane he owns. This election is just a delight.