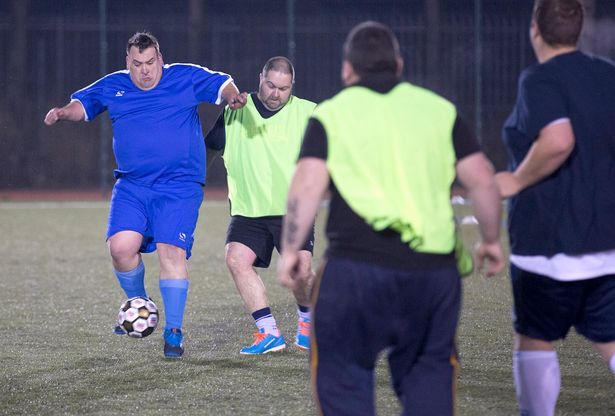 A council-supported football league for overweight men has been launched in an attempt to help soccer-loving blokes shed a few pounds.

The league is only open to men who have a BMI of 30 or higher and are looking to lose weight and get fit.

Points are awarded not just for games won, but pounds lost each week – with the best slimmers winning prizes.

The league – which runs for 14 weeks – is based in Solihull, West Mids, and has the support of the local council.

More than 90 men – ranging in age from early 20s to 69 – attended the opening fixtures on Monday night.

Fighting the flab: The Man V Fat league is for blokes with a BMI of 30 or higher

Who ate all the pies? Erm, we did, say they blokes taking part in the scheme

Organiser Andrew Shanahan, 37, came up with the idea for the league after becoming fed-up with traditional weight loss classes.

He said: “Blokes think if they are going to lose weight they need to run a marathon or do some Spartan event. That’s the wrong path.

Loser: Jay Ali is playing in the league in Solihull, West Mids

Time to get fit: Steve Granfield is hoping to lose a few pounds by playing football

“You should change how you eat, change your attitude to your lifestyle. And you need support.

“I thought why not get people together in person having a kickabout?

Bright idea: The league has the support of the local council

Popular: More than 90 men attended the opening fixtures on Monday

“Sixty seven per cent of men are overweight and they’re ashamed they’ve let themselves go so give up football.

“A lot of men want to get back into sport but it’s intimidating because clubs only tend to have one fat bloke on their team.

Broad appeal: The blokes taking part range in age from early 20s to 69

“When you start you have to have a BMI of over 30, but if you drop below it you’ll be celebrated.”

The ‘Man V Fat’ scheme is run in partnership with Solihull Council and Leisure Leagues.

Super slimmer: The scheme is the brainchild of Andrew Shanahan

Stephen Munday, head of Public Health at Solihull Council, said: “This initiative is really exciting and something the council are fully behind.

“There is a national concern for obesity but it mostly centres around children and women.

“Women can go to weight loss classes for support but men struggle to find groups that actually interest them to lose weight.”

One billion cakes in a year: Scotland's love affair with sugar is a big fat slice of a health disaster