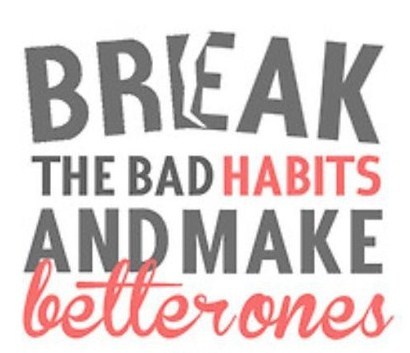 “You need a routine, in order to build a habit. But you can’t have habits, without proper routines. “

The aforementioned is very true, and has a great deal of importance in what I’m gonna be talking about today, breaking habits. So first, let’s look at why you might have such a habit.

Most people don’t want to admit it, but there are a lot of bad habits that people have nowadays that they’ve unnecessarily become a routine. Watching porn, eating too much junk food, drinking a lot – all can be detrimental and none of which are good for you in the long run. All of these started with an enticing to the idea of such, followed by you trying it out and developing a liking/habit for it. Much like our attitudes towards women, when you develop a liking/habit for something, it has a precedent in your mind that is hard to beat – that is, you view it was a necessary and needed part of your daily/weekly or whatever routine. Such is the case of when Beta’s catch oneitis, or something of the sort, it clouds their judgement and gives them a heightened sense of comfort and well-being.

I’m here to tell you that’s not the case, and you can break your bad habits and it wont take that long.

For me it’s a 3 step program that I use to break bad habits: Identify, Isolate, Improve.

This is the easiest stage, and if you’re reading this than you most likely already know most, if not all of your bad habits that you want to change. I was still a teenager when I first developed this strategy, and it’s helped me with every bad habit since then. You have to identify the problem, WHEN you are affected by such and WHY.

The WHY is the most important. The people, places or things that either contribute to your bad habits, must be cut off.
Friends laughing at you or berating you for focusing more on your goals and starting a business/making more money than hanging out with them? Drop them, they’re the same crabs at the bottom of the barrel that will try to bring you down as soon as you are starting get somewhere in life as they notice your improvement while noting their own lives are stagnant. Remember, a real friend would ask how they can help you in exchange for money, they don’t look for handouts.
Those apps on your phone you use to order food? Delete them. I did, and I found it a lot easier to dispel those thoughts of ordering food when they come up, especially because of the obstacle I placed in front of me to do so.

Eating too much junk food? That’s the problem.
When am I usually doing this? Late at night or early in the morning especially when I’m stoned.
Why am I doing this? I’m not even hungry 10/10 times when I eat junk food, I’m always either just bored or high.

This part is important, as one of the most effective ways to eliminate bad habits from your psyche is the isolation of such from the good. Much like the kids on the playground isolated the child they felt like wasn’t part of their “crew”, you must isolate all bad habits in your head psychologically. This may not seem easy at first, but it all boils down to identifying the problem, when and why & then constantly reminding yourself the dangers of it.

I often find it helpful to write down my bad habits, and then under write down how it’s detrimentally affecting my life, and how I wish to change. I find that by the end of this, I was always either angry at myself for allowing such a bad habit to develop, or happy and inspired to remove it from my psyche (Such was the case when I stopped eating fast food, I haven’t felt better or more in shape ever in my life). After you are able to do all of this reflection (which, again IT IS HELPFUL TO WRITE DOWN SO YOU CAN ORGANIZE YOUR BRAIN), then comes the next part.

Now there are a number of ways you can do this, from destroying a negative habit (I.E. having a negative personality) to turning it into something positive entirely. This all boils down to your mindset though, you must have another, GOOD habit in mind to start developing when you get the urges to do the old, bad ones. Not only that, but you must be able to explain to yourself why the habit is better than your old one, how your adjustments are making you happier, and the like. This is called positive reinforcement, which in correlation with self-criticism can be very effective in eliminating and improving bad habits. It’s like thinking, don’t watch porn right now just because you’re bored, that’s not going to help anything and make you feel like a loser – Go lift some weight, go talk to some women, go READ A BOOK, go do something productive and see how much better you fare.

You will find yourself arguing with yourself in your head a lot, but by the end of the process you will come out a new and improved person. In other words:

When I used to get the urge to eat junk/fast food (which I still do, don’t get me wrong, it’s just very rare), two things always cross my mind:

Once you have that part down, identifying the main issues YOU have with the habit, you must develop a better habit to take its place, and TRAIN yourself to do such, so that it becomes part of your routine.

Instead of such, I would focus on how I want my body to look and how I want to feel, and use that as fuel to inspire me, and I usually end up at the gym within the hour. Either that, or cranking out push ups and pull ups in my apartment, while my friend sit there eating their Wendy’s, staring in amazement.
They had never seen anyone live like this before, and it actually astounded them.

A couple people tried to talk shit to me about it, but do you think those people are still around? You can guess the answer to that one.

I cannot stress enough that this takes TIME, PRACTICE and DISCIPLINE (which it helps build but you must have some type of basic discipline or at least grasp of the idea). It helps to write these down and organize them as to aid the Triple I process, and effectively eliminate your bad habits.

Want to eliminate the habit of being broke? Pick up a copy of my new e-book, MAKE MONEY while MAKING MONEY.

Be sure to leave a comment, follow me on twitter and drop your name in the subscriber box too, you guys don’t know how helpful and important doing such a little thing as that can do.

via : Unlock Your Bravado

My Name is My Name – Art of the Brand

How to Survive a Street Fight