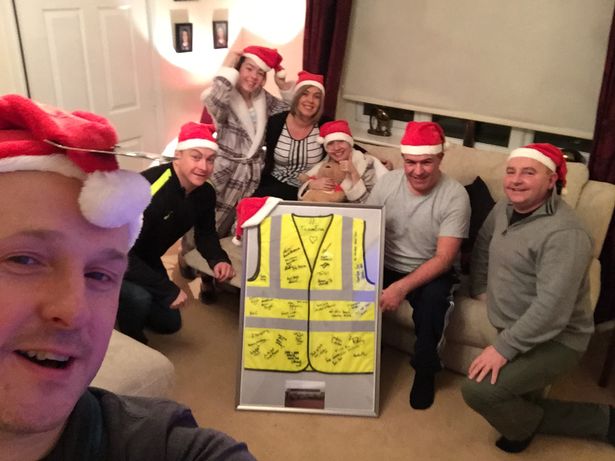 A CHARITY appeal launched by the twin sister of a teenage leukemia sufferer has raised more than £31,000 in just two months.

And now a hilarious video for Erin McCafferty featuring a hill trek, whisky tasting and messages from stars including Still Game and River City favourites has become an internet sensation.

Erin, 15, from Carluke, Lanarkshire was diagnosed in October after a short period of feeling unwell.

Her twin, Nicole, opened a JustGiving page to raise funds for the Teenage Cancer Trust and started using the hashtag #TeamErin.

But having initially setting out to raise £800 the appeal now stands at a staggering £31,381.

It has been given fresh momentum this week by the Carluke Shamrock Celtic Supporters Club.

The club organised a 50-strong trek up Tinto Hill with all climbers dressed in Santa hats and high-visibility vests.

And they filmed the day with comical results.

Richard Swan, who helped organise the trek, said: “The plan for the hill climb quickly grew into a full day event, involving transport being arranged for the climbers, a whisky tasting session, and then a celebration event in the local community hall afterwards.

“With the event expanded, and a host of individuals and companies providing supplies and support, the organisers decided that they would record the full day in film and photograph.

“This would act as a nice keepsake for everyone involved, and for Erin herself to look back on.”

Richard and fellow organisers Brian Connelly and Michael McKeever also decided to push the boat out by recruiting some of the biggest names in Scottish comedy.

He added: “The film became a movie that would show the full day from start to finish, but would also contain little funny sketches and surprises using the theme of the Scottish comedy show Still Game, as it’s a personal favourite of Erin.”

And Richard said the premiere of The Shambolic Winter Challenge on Thursday was a special moment.

He added: “Watching the family laugh and cry all the way through the movie was fantastic.

“It was a really nice balance of tears and joy; a lovely emotional night with them.”

Co-organiser Brian Connelly said: “Just seeing Erin’s face light up at the sketches and the surprises was reward enough for all the work that went into the big day.”

The team drafted in Carluke writer Martin McCardie, whose credits include Shameless and River City, to organise a host of stars to record special messages at the end of the 26 minute film.

Karen Dunbar, who is currently appearing in Priscilla Queen of the Desert, said: “I know I am dressed like a pink/ purple koala bear but it really is me.

“I just wanted to say hello and I hope you are feeling better.”

Gavin Mitchell, otherwise known as Boaby the Barman, said: “Just wanted to say lots of love, lots of luck and a happy 2016.

“Keep on keeping on.

“We are all thinking about you.”

And after comically fixing his hair and beard Greg Hemphill said: “This is just a little message to you because I hear from some very good friends that you are fighting an incredibly hard fight this Christmas.

He said: “I hear you are a very special young woman and I hear you have a fantastic numbert of pals who have raised a phenomenal amount pf money for your treatment.

“I think that be fantastic for you to know that so many people love you and want to do something for you.”

Afterwards a thrilled Erin tweeted: “My dad’s pals are amazing. Carluke Shamrock’s wee film for me is outstanding.”

After the movie was then released on Facebook it went viral and by last night (FRI) it had been viewed more 10,000 times.

Scores of private donations have also been made to pay for a holiday for Erin at the end of her two-year treatment programme.

'Untreatable' strain of gonorrhoea breaks out across the north of England