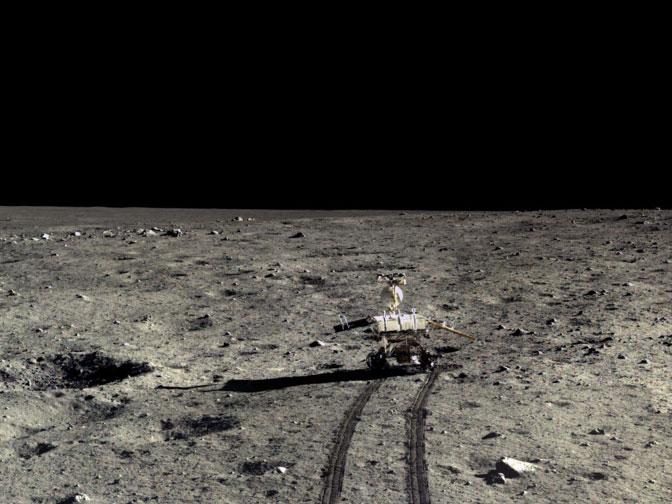 The Chinese space programme has released a trove of some of the highest-resolution images of the Moon’s surface ever taken.

The images were taken by the Yutu lunar rover, more commonly known in the West as the ‘Jade Rabbit’, which touched down on the Moon on December 2013 as part of the Chang’e-3 Moon mission.

The lander became the first to operate on the Moon since the Soviet Lunokhod 2 rover stopped operations in 1973, and now holds the record for the longest operational period ever spent by a lunar rover.

Unlike Nasa or the European Space Agency, which release images and data from around the universe on a daily basis, the China National Space Administration (CNSA) is much more secretive, and releases of this size are uncommon.

The CNSA’s website is also fairly difficult to use (and is entirely in Chinese), so announcements and reports usually don’t get too much attention.

An image of the lander unit taken by the rover two days before its motor failed (Pic: Chinese Academy of Sciences/China National Space Administration/The Science and Application Center for Moon and Deepspace Exploration/Emily Lakdawalla)

Fortunately, the huge set of high-resolution, true-colour images were downloaded and re-hosted by Emily Lakdawalla on The Planetary Society‘s website.

The images are some of the most detailed ever taken of the Moon, showing the rocky lunar surface, rover tracks and impressive rock formations.

A photo Yutu took of its own shadow on 12 January 2014 (Pic: Chinese Academy of Sciences/China National Space Administration/The Science and Application Center for Moon and Deepspace Exploration)

Due to the cold lunar nights, which last around 14 days, the Jade Rabbit began to have difficulty moving by early 2014, and eventually was left totally motionless on the Moon’s surface.

Fortunately, the rover’s instruments were still working, allowing it to record data and take these amazing pictures from a static position.

The CNSA has already got more lunar missions in the pipeline, with the Chang’e-4 rocket set to send a probe to the far side of the Moon by 2020.