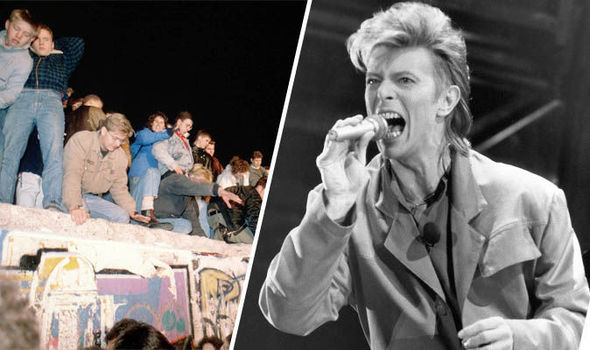 As tributes for the rock star poured in from around the world, Germany’s foreign office used their official Twitter account to post: “Goodbye, David Bowie. You are now among #Heroes. Thank you for helping to bring down the #wall.”

Bowie’s death was announced on Monday following the 69-year-old’s 18-month battle with cancer.

The German foreign office also posted a YouTube video of one of the musician’s signature songs ‘Heroes’, which he recorded in Berlin.

Bowie lived in West Berlin for three years as he battled drug addiction in the late 1970s.

During that time he recorded three albums at a recording studio near the wall that divided the city from 1961 to 1989.

In 1987, Bowie returned to West Berlin to headline a concert close to the city’s dividing wall shortly before US President Ronald Reagan’s visit to the German capital.

Speaking German and performing ‘Heroes’ during his set, Bowie sent a message to “our friends” on the other side of the wall, where East Germans had gathered to listened to the concert.

Riots erupted on the East side during the three-day concert, the first in  of  a long series of demonstrations.

A week later, Mr Reagan demanded Soviet leader Mikhail Gorbachev “tear down this wall!” as he delivered an historic speech in West Berlin.

The Berlin Wall finally fell in 1989, leaving many Bowie fans to credit the musician with bringing down the barrier between West and East Germany.