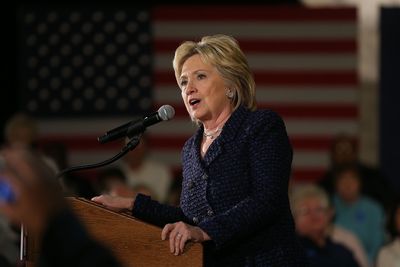 It’s a familiar dilemma for women: Should we highlight our gender or overcompensate for it?

In 2008, when Hillary Clinton was running as the first candidate with a credible chance of becoming the first woman president in the nation’s history, she staked her fortunes on the latter strategy.

On the trail, she shunned questions about her gender and talked up her experience on masculine-seeming issues like the economy and foreign policy. She rarely spoke of the historic aspect of her candidacy — until she lost.

Her approach could not be more different this time around. Her gender is not only a core tenet of her campaign — she’s treating it as a competitive advantage.

Clinton made an explicit case for women’s leadership in a recent set of comments to Time magazine’s Jay Newton-Small, whose book on women in politics titled Broad Influence: How Women Are Changing the Way America Works will be published next week.

In the interview, Clinton claims that women lead in substantively different ways — and that those differences are an advantage for her.

“I just think women in general are better listeners, are more collegial, more open to new ideas and how to make things work in a way that looks for win-win outcomes,” she said.

These comments fit Clinton’s narrative: that as a woman, she can break through partisan vitriol and gridlock with a more collaborative approach. But are her assertions born out of facts?

Women in leadership roles, on average, are more cooperative and person-centric than men

There are two qualities where this difference is starkest. Women consistently rate higher than men, on average, in promoting “relational” and “participative” leadership.

A person is a “relational” leader when he or she derives some authority from relationships with aides or employees. So a relational boss would get to know members of his or her team — by asking about their families or weekend plans — in order to forge a tighter bond. Bosses who lean in the opposite direction are “transactional,” a self-explanatory term that describes a leadership style that’s more directed.

In a similar vein, a “participative” boss is someone who involves team members in brainstorming and decision-making. Someone on the opposite end of that spectrum would be a “directive” leader, delivering the results of a decision to her team without prior input.

So on these points, Hillary Clinton is right: Women do listen more. They are more collegial and open to new ideas. All of those traits are hallmarks of the two psychological qualities that set women apart.

Clinton is claiming those differences as an advantage, and she’s not wrong, necessarily — though being too “relational” or too “participative” also has its drawbacks.

People who are too relational run the risk of being seen as friends, abdicating the credibility they need as leaders. And people who are too participative might be seen as weak or indecisive. It’s not a coincidence that these risks align with stereotypes of women leaders.

It’s also important to remember that these differences are relatively small, and they apply only to the average man and woman. So using them as a framework to assess specific women in leadership roles just won’t work.

As I’ve written, assessing a person’s personality traits is much more difficult to do when we’re examining them with a partisan overlay.

Some of the best research we have on women’s leadership styles in politics examines women in an unlikely place but where they’re most prevalent: in legislative bodies. In a study that’s yet to be published, Jennifer Lawless, an expert on women in politics at American University, found that women are just as likely as men to use procedural votes to sabotage the fate of bills they don’t like. In other words, their partisan affiliation trumps any inclination they might have to hear other people out.

That sort of politicking goes against Hillary’s claim that women are more willing to work together to reach common solutions.

Of course, legislators are an odd population of leaders to study, because they operate more as team members than as executives. There isn’t enough research on women in executive offices because, even today, there are relatively few female governors: Six of 50 serving right now are women, and only 36 have ever served.

It’s possible that similar, more deliberative tendencies exist in women who hold executive offices like governor or, maybe, president. But since there are so few, and their actions are not recorded in easy-to-track votes or statistics, researchers don’t know how to verify that claim.