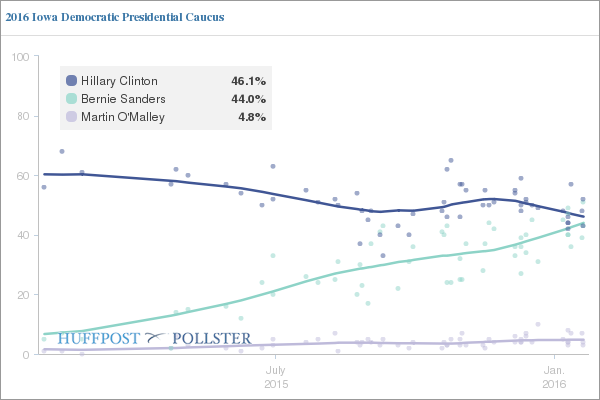 Hillary Clinton and her supporters are getting worried about Bernie Sanders and his.

Because of this, the Democratic side of the race is going through a lurching transition.

Until very recently, it was a model primary. The establishment candidate was being challenged by an insurgent, who was pulling her left on a few key issues. It was all issues-based, above the belt, a good warmup for Clinton and a healthy set of debates for the party.

But now Sanders has built organization and momentum that make him more than a protest candidate. There’s a chance he could win. He’s a real candidate now.

There’s a great deal that goes along with that transition, not all of which has been fully digested yet by the US body politic. Here are three obvious implications:

But there’s a fourth implication I haven’t seen clearly articulated anywhere, so I want to lay it out. To put it bluntly, Sanders’s transition from protest to serious candidate raises a new question about him and Clinton, namely: Who would be better at being president?

It sounds simple, but it wasn’t really a test Sanders had to pass before, so it’s not yet been a serious point of comparison between the two. Now it is a relevant question, and worth digging into a little. Answering it depends on clarifying exactly what kind of job a Democratic presidency would be in 2016.

A Democratic president will get no cooperation from Congress

Clinton and Sanders are not nearly as far apart on policy as both sides would currently have us believe, as Jonathan Cohn argued in a recent column. And the differences between them pale next to their shared differences with any Republican in the race (hence electability becoming the dominant question).

What’s more, Cohn points out, both would spend their time in office staving off Republicans, not passing their dream bills.

The last point is worth expanding.

In 2016, barring some truly disruptive political event (which, who knows, Trump may prove to be), Republicans are going to keep control of the House of Representatives. They may keep control of the Senate as well, though that’s less certain, but all they need to block any hope of an expansive legislative agenda is the House, something Obama has learned over and over again.

So there will be no single-payer health care, no national carbon tax, no free college, no reparations. Given the current disposition of the Republican Party, it will be a miracle if regular-order business like budgets and debt ceiling bills can get through — if the government can keep functioning at all.

On legislation, the next Democratic president (if there is one) will mostly play defense, using the filibuster or, if necessary, the veto pen.

What progress there is on domestic policy will come from inventive, assertive use of executive power and smart appointments, both judicial and administrative.

Obama learned to succeed with no help

To see how that works, Sanders and Clinton can consult the current officeholder. For his entire term in office, Obama has faced a stark and unprecedented degree of obstructionism. For the last six years, legislation, certainly legislation of any ambition or scope, was, with a few rare exceptions, impossible.

It took him a while, but he learned to make the best of it. He got good at it, as his record of accomplishment shows.

But getting good at it took a particular disposition and set of skills.

As Ezra Klein points out, Obama won on policy but lost on politics. He got a lot done, but it cost him; polarization remains more poisonous than ever.

I think the right way to phrase it, though, is that Obama won on policy because he lost on politics, or, rather, because he was willing to lose on politics.

Even as their obstruction has hardened into dogma, Republicans have retained a talent for manipulating the levers of Washington opinion, which are designed around a) the presumption of party symmetry, and b) an overwhelming focus on the president as the center of political gravity.

If his party’s agenda is unable to attract Republican votes, it is assumed to be the president’s fault. He wouldn’t meet in the middle, wouldn’t compromise.

If political polarization and hostility remain dominant in Washington, it’s assumed to be the president’s fault. He should have called John Boehner more, schmoozed more.

If a policy passes on a party-line vote, or through unilateral use of executive action, it is assumed to be the work of a power-mad tyrant.

This isn’t just a media thing. The public, too, shares a strong heuristic that bipartisanship is a signal of wisdom, or at least acceptability. Mitch McConnell was quite canny in exploiting it, recognizing its power before Obama was even sworn in. As he famously said in an interview about Obamacare:

It was absolutely critical that everybody be together because if the proponents of the [health care] bill were able to say it was bipartisan, it tended to convey to the public that this is OK, they must have figured it out. It’s either bipartisan or it isn’t.

That’s why he and other Republican leaders agreed, before Obama walked into the White House, that they would oppose his every move in a unified front.

If even a few Republicans strayed, it would lend Obama’s efforts the aura of bipartisanship. Whereas if Republicans stayed united and just a few Dems strayed, suddenly it was Obama’s opposition that was bipartisan, a crucial public relations advantage.

The media also exploits this heuristic, as does the permanent Washington political class. There is a powerful incentive, so built-in it’s almost beyond notice, for the president to chase the approval of Washington’s Very Serious People (VSPs) by uniting Red and Blue America, or at least by being seen making the attempt.

The incentive certainly works on many congressional Democrats, who spend much of their time in a defensive crouch, cowering from anything controversial, including Obamacare and Obama.

As long as Republicans kept Obama chasing after that approval and yanking it away at the last minute like Lucy with her football, they were able to effectively neutralize him. It was only after his reelection and — improbably — the Republican gains of the 2014 midterms that Obama finally gave up on it for good.

That’s when he developed his rhymes-with-bucket list and got to work. And he has racked up wins ever since, breaking the second-term curse in spectacular fashion.

What it takes to succeed as a Democratic president these days

Obama’s success has required two things. One is the self-possession and confidence to weather the disapproval of VSPs and the mau-mauing of Republican opponents. (A big part of this is settling on the right advisers for the inner circle.)

The second is a good sense of the executive machinery and how it might be deployed to positive effect. Most of Obama’s second-term domestic victories have been bureaucratic: getting the military to sign off on LGBTQ soldiers and female combat troops, finding new ways to extend the Clean Air Act, raising the minimum wage for federal contract workers, and the like.

(One area where Obama has often been criticized is in his lack of attention to appointments, which will be crucial to the next president’s success. There is something to this criticism, though Obama’s effect on the federal bureaucracy is often underestimated.)

Determining where executive powers can be pushed, how to bring the bureaucracy along, the best way to structure new rules to make them resilient, the savviest people to run executive agencies and sit on the bench — these are all distinct skills.

Obama made progress through means the media and the public found unfamiliar and somewhat discomfiting, while facing a right-wing politico-media machine bent above all on denying him credit for anything. He won policy but lost politics.

For the left, that is vastly preferable to the inverse. Democrats would be lucky to replicate it.

Which brings us back to Clinton and Sanders. If they are both serious candidates for president, then they should be treated like job candidates, evaluated on the qualities that are likely to affect their performance.

How liberal they are willing to talk during a primary is not one of those qualities. Their opinions on single-payer health care are not hugely relevant, nor are their stances on breaking up big banks, carbon taxes, serious gun control, or reparations for slavery.

How they talk about these aspirational issues can tell us something about their priorities, of course. But in practice, they are going to be hemmed in to the point that circumstances, more than priorities, will dictate opportunities.

Success, then, will come from seizing those opportunities when they arise, and making the most of them. It will come from understanding and manipulating the levers of the bureaucracy, from being ruthless about taking incremental wins wherever they can be found, from taking the long view and not overreacting to the hysterical, endless fluctuations in elite DC opinion.

These are dark arts. It’s difficult to predict who might master them.

And to make matters more obscure for voters, neither is willing to talk about these things directly. Admitting that your presidency will mostly be a rearguard battle, a unilateral executive grind, is not attractive politics. It doesn’t make for fun campaign rallies.

But these qualities matter far more, in concrete terms, than the boldness of the candidates’ plans or the inspirational quality of their rhetoric.

Even though idealistic Democratic primary voters may not want to hear it, when it comes to domestic policy, the Democratic contest is about who will be best at securing Obama’s accomplishments against Republican attack, exploiting incremental advances when they become possible, and manipulating the personalities and power centers inside Washington.

It’s about who will be the best grinder. That’s not the job the candidates, the media, and the public are talking about, but it’s the job Democrats are hiring a president to do.