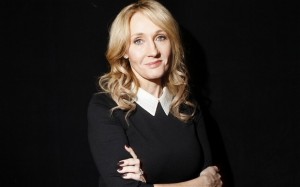 For all the simple Muggles out there, Death Eaters are a group of radicals who support the evil Lord Voldemort (whom Rowling once compared to Trump), with hopes to eradicate all who are not pureblooded (those lucky enough to be born with parents who are both magical).

Pierson’s four-year-old comments resurfaced over the weekend when Mediaite published a story titled ‘Trump Spokeswoman’s Twitter History Is a Goldmine of Embarrassment.’

Pierson, whose biological mother was white and father was black, went on CNN to defend her “pure breed” comment: “I’m an activist and I am a half-breed. I’m always getting called a half-breed. And on Twitter when you’re fighting with liberals and even establishment, you go back at them in the same silliness they are giving you.”

“I myself am a half-breed,” she continued. “We have entered silly season. Donald Trump is up in the polls. There’s desperate campaigns out there, they can’t take him down so they try to take down the people that are around him. And we’re just not going to get distracted by all that nonsense.”

Rowling previously shared her disdain for Trump, tweeting a BBC story about the candidate and comparing him to one of the greatest literary villains of all time, who she just happened to create.

It was also announced today that Rowling will be receiving the annual PEN/Allen Foundation Literary Service Award at its gala in May, for her written work and her support of various causes, including multiple sclerosis research, eliminating social exclusion and fighting censorship.

The award is presented “to a critically acclaimed author whose work embodies its mission to oppose repression in any form and to champion the best of humanity.” Past recipients have included Salman Rushdie and Toni Morrison.

The biggest moments for LGBTQ rights in 2015