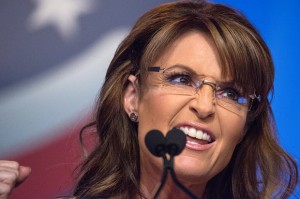 The Washington Post reported, “‘No more pussyfootin’ around. Our troops deserve the best! You deserve the best,’ she told the crowd. ‘. . . I’m here to support the next president of the United States: Donald Trump!’” It seems a match made in heaven between the two celebrities, although Trump seemed miffed she spoke for so long. So how did we get to this point?

In some ways the Donald Trump-Sarah Palin team is the perfect comeuppance to the far-right — including the loudest talk show hosts, the anti-immigrant propagandists, the inside-the-Beltway groups that make money from political chaos and the pols who take advantage of all of those voices, politicians like Sen. Ted Cruz.

The far-right did all in their power to undermine compromise, to promote know-nothingism on immigration and to root for government failure (as in the 2013 shutdown). Beltway groups, armed with score cards and vitriol, demeaned anyone but those like the Freedom Caucus, those who had no responsibility for governance and no risk of electoral defeat. They even took to savaging Speaker Paul Ryan.

Palin, long after she revealed herself to be an unserious populist and the 2008 election was in the rear-view mirror, was still heralded by the far-right as the warrior against the MSM and liberal elites more generally. She was the queen bee at gatherings like CPAC. Her admirers insisted she, not Republican lawmakers trying to govern, had the pulse of the public.

Then along comes Donald Trump. Many (but not the more ideologically pristine Beltway groups) rushed to his side as well. He was right — they insisted! — about Muslims, immigration and foreign policy (a weird brew of isolationism, bombast and infatuation with dictators). Once again he was slaying inside-the-Beltway Republicans, whom the far-right was convinced were indistinguishable from Democrats. So what if he embraced protectionism and disdain for civil liberties? His past Democratic dalliances were of no consequence.

But then — oops! — Trump not only caught on, but also turned around to destroy their favourite ideological purist, Cruz. Cruz could sputter that Trump embraced cronyism and was not loyal to the GOP or conservative ideas. But heck, talk radio had been defending Trump for months. Trump is an ignoramus on foreign policy, Cruz’s backers insisted. Well, Cruz had turned his own foreign policy into mush trying to play to supporters of Trump, Sen. Rand Paul, and the increasingly isolationist talk radio. So what’s his beef with Trump? After perfecting the art of personal insult and resentment, Cruz devotees are now hobbled in attacking Trump.

Cruz, it seems, made the same error many establishment politicians and the MSM did: He underestimated Trump and instead of under-cutting him from the start, helped defend him and perpetuate the media hoopla. Now it’s hard to take Cruz’s complaints about the real estate mogul seriously.

It seems the far-right noise machine, which lacks a conservative temperament and adherence to thoughtful positions, has met its enemies — its own creations in the persons of Trump and Palin and in voters and listeners so unmoored to reality and inured to reason that Cruz’s attempt to dissect Trump’s proposals falls on deaf ears.

So which is it — is Palin a know-nothing nut with no grasp of conservative principles or the Joan of Arc of the right wing? How can Cruz be preferable to Trump if so many of these voices had argued for months that Trump was right on China, the Iraq War and so much more? Oh my, what talk radio hysterics have wrought!

While that faction of the GOP is figuring out its standard bearer, the rest of the party had better figure out its strongest horse sooner rather than later. Once they rally around a viable, responsible figure they can go about the business of defeating the winner of the Cruz-Trump scrum.