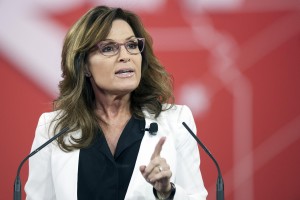 Wouldn’t it be amazing if Republican presidential hopeful Donald Trump picked Sarah Palin to be his running mate? Would that not be the ultimate right-wing ticket? I can just see Palin trying to justify this to Trump, and his handlers thinking it would be a great way to make him look more moderate come election time.
Robert McAuley, Burlington, Ont.

Former U.S. president Ronald Reagan was elected 1981, following the soft policies of Jimmy Carter. Many were alarmed at the time about his rhetoric against the Soviet Union, but during his term, he proved to be very successful at turning the U.S. economy around, strengthening the military and nudging the U.S.S.R. towards collapse.

Similarly, while there is a lot of bluster in Donald Trump’s speeches, when in office, he will tone down his policies and be restrained by the from carrying out some of his proposals by the constitution. But the Islamists, who are committing terrorist acts around the world, will be restrained as well, and that will make it all worthwhile.
Jiti Khanna, Vancouver.

It would be interesting to see if the U.K. would ban Donald Trump from entering the little country if he becomes president of the United States in 2017. Not that I can see that ever happening, but I would still love to see the reaction.

Despite all his bluster and bluntness, Trump is a far better option for America than team Hillary, in my opinion. It’s just a pity that Trump does not support Jerusalem as Israel’s eternal capital, but I guess you can’t have everything.
Jerome Henen, North Vancouver, B.C.

Andrew Coyne misses the real picture when he says: “If the deficit is financed internally, it leaves that much less capital available to private investment.” He fails to realize that after foolishly investing billions of dollars in the oilsands, thinking oil prices will always remain sky high, private investors are now shy to make any large investment until things have improved. As such, it is imperative for the government to stimulate the economy through infrastructure spending.

Coyne opposes raising taxes on the rich to stem budget deficit because it will trigger capital flight (former U.S. president Bill Clinton did exactly that without triggering any capital flight). He fails to realize that Keynesianism never went out of favour; it is the only medicine available to nurture an ailing economy back to health. After the subprime mortgage crisis, even George W. Bush declared: “We are all Keynesian now.” Let’s hope Prime Minister Justin Trudeau rejects the views of people like Coyne.
Mahmood Elahi, Ottawa.

John Ivison’s statement that, “Allies no longer (are) taking Canada’s role seriously” when it comes to fighting terrorism in the Middle East, is very obvious to all except Prime Minister Justin Trudeau and his cabinet.

The front line of the war on terror is in the Middle East, but it is also now echoing, on a smaller scale, around the globe. Considering how terrorism is spreading, no Canadian, anywhere, can be absolutely certain that he or she is safe from jihadists. So how can we logically refuse to become actively involved in this war?

Were Trudeau to come forward to explain that recent events have caused him to reconsider his intention of withdrawing his military involvement in the Mideast, most Canadians would probably agree with him. After all, won’t he soon tell us that his election promise of a $10 billion infrastructure deficit is likely to change to $20 billion or even $30 billion? If that can change, surely his election promise of withdrawing the Canadian military can change, too.
Robert Marcogliese, Montreal.

Canada’s role in combating the Islamic State of Iraq and the Levant (ISIL) was rather clear a few moths ago: we sent a handful of planes to aid the bombing mission, provided ground support and air re-fuelling, and provided training to the locals who were fighting ISIL. The majority of Canadians were happy with our role.

Since that time, there was an election, as well as terror attacks in Paris and elsewhere. People are pretty forgiving when you go back on a campaign promise when circumstances dictate that you need to re-think your position.

The prime minister’s stubbornness on maintaining his position is countered by the audacity of going to Davos and making a pitch for investment in Canada, to some of the same people whose countries are ramping up their involvement in the fight against ISIL. The prime minister may like to use the phrase ‘”Canada is back,” but there has never been a time in our past when we have backed out of a fight we were involved in, and then turned around and asked people from the countries who were doing the fighting to help our economy by investing in it.
Jeff Spooner, Kinburn, Ont.

When U.S. General Norman Schwarzkopf was asked to comment on France’s decision not to join the coalition to deal with Saddam Hussein’s Iraq, he remarked that going into battle without the French was like going moose hunting without your accordion. What do you suppose the U.S. military is saying about Canada these days?
John Winstanley, Victoria.

Brian Hutchinson was quite correct in pointing out the obvious inconsistency between Vancouver’s ban on wine sales in grocery stores and the free-for-all it allows for the sale of marijuana. It may seem irrational, but experience has taught me that behind many of the reactionary and restrictive policies put forth by B.C. municipalities, there lies a labour union — in this case, the British Columbia Government Employees Union, whose members work in the government liquor stores. Public sector unions have huge clout in multiplicities because so few people vote.
Ted Mason, New Westminster, B.C.