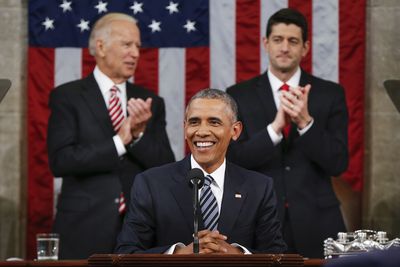 President Barack Obama’s 2016 State of the Union speech didn’t, as previous speeches did, land any firsts on LGBTQ issues. Obama didn’t have any big moments like in 2012, when he became the first sitting president to support marriage equality, or in 2015, when he became the first president to say the word “transgender” in a State of the Union address. Instead, he focused on broad platforms, vaguely advocating for equality.

But his administration may be on the verge of having the most direct impact it’s ever had on LGBTQ equality — by potentially fostering a legal challenge that will lead to a federal ban on discrimination in the workplace and housing.

In the US, most states’ civil rights laws don’t ban discrimination based on sexual orientation and gender identity in the workplace, housing, or public accommodations (hotels, restaurants, and other places that serve the general public).

As a result, more than half of LGBTQ Americans, according to the advocacy group Movement Advancement Project, live in a state where, under state law, an employer can legally fire someone because he’s gay, a landlord can legally evict someone because she’s lesbian, and a hotel manager can legally deny service to someone who’s transgender — for no reason other than the person’s sexual orientation or gender identity.

Banning this type of discrimination has long been a goal of LGBTQ advocates, through the push for the Employment Non-Discrimination Act. But the ban is closer than ever to happening as the Obama administration, quietly but surely, helps along a new legal interpretation of decades-old laws.

The Obama administration’s work to redefine the Civil Rights Act

Advocates have long argued that the Civil Rights Act of 1964 and the Fair Housing Act should protect LGBTQ people from discrimination in the workplace and housing, as they do for race, color, national origin, religion, and sex.

It’s the last protection — sex — that’s relevant here: Advocates say that protections against sex-based discrimination also apply to sexual orientation and gender identity, since discrimination against LGBTQ people is, fundamentally, rooted in expectations of what people of certain sexes should be like. (One caveat: These protections would not apply to public accommodations, since sex isn’t covered in federal laws for that area.)

The federal government, under Obama, has quietly come around to this interpretation of the Civil Rights Act. The Equal Employment Opportunity Commission (EEOC), whose five-person commission is made up of four Obama appointees, in 2012 agreed that the Civil Rights Act protects people from discrimination based on gender identity. In 2015, it expanded the protections to sexual orientation.

The US Department of Justice has similarly stated that it believes federal civil rights protections apply to gender identity, although it has yet to say the same about sexual orientation. But since EEOC is seen as an expert advisory for other federal agencies on employment issues, it’s possible the Justice Department’s position could change soon. (LGBTQ advocates certainly hope so; they’ve been pushing the Justice Department to change its stance for years.)

Why does all of this matter? Essentially, this is fostering the beginning of a big court challenge over the Civil Rights Act’s reach — one that could end up at the US Supreme Court. And if that were to happen, and the Supreme Court ruled once again in favor of LGBTQ rights, it would likely be a result of support not just from LGBTQ advocates, but also from the EEOC and the Justice Department, both of which are federal agencies that are respected by the courts.

Notably, this court challenge could take a while to work up to the Supreme Court, likely until after Obama is out of office. But by planting the seeds to this challenge through his appointees to the EEOC and, possibly, a change in the Justice Department’s stated legal opinion in this area, Obama and his administration could lead to yet another huge impact on LGBTQ rights.